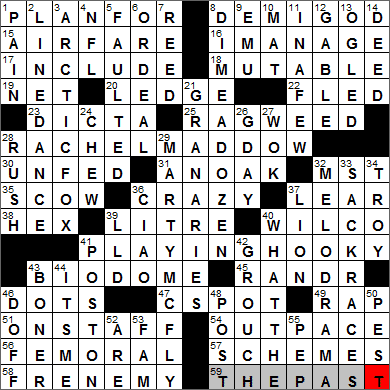 Today’s Wiki-est, Amazonian Googlies
Across
8. Highly revered one : DEMIGOD
In Greek mythology, a demigod was a half-god, the offspring of one parent who was a god and one parent who was human. The list of demigods includes the Greek Heracles and the Celtic hero Cú Chulainn.

15. Delta factor? : AIRFARE
Today, Delta is the world’s largest airline (after merging with Northwest Airlines in 2008) and is also the oldest airline still operating in the US. Delta’s roots go back to 1924 before it started carrying passengers and was called Huff Duland Dusters, a crop dusting company based in Macon, Georgia. The name Delta Air Service was introduced in 1928.

25. Pollen count plant : RAGWEED
The pollen of ragweed is the greatest allergen of all pollens. It seems that the pollen season has been lengthening in recent years, probably due to global warming.

28. 2011 Emmy-winning MSNBC host : RACHEL MADDOW
You used to be able to listen to “The Rachel Maddow Show” on Air America Radio before the radio station went bust. Now you can see Maddow on a TV show with the same name, every night on MSNBC. She is the first openly gay anchor to host a prime-time news program in the US.

35. Wide-beamed vessel : SCOW
A scow is a flat-bottomed boat with squared-off ends that’s often used for transportation, usually pushed or pulled by a barge. Often a scow can be seen carrying junk or garbage.

38. Evil eye, e.g. : HEX
“Hexen” is a German word meaning “to practice witchcraft”. The use of the word “hex” in English started with the Pennsylvania Dutch in the early 1800s.

40. Roger’s relative : WILCO
In the world of radiotelephony, “wilco” is short for “I understand and will comply”.

47. Benjamin : C-SPOT
Benjamin Franklin is featured on one side of the hundred-dollar bill, and Philadelphia’s Independence Hall on the other side. There is a famous “error” in the image of Independence Hall. If you look closely at the clock face at the top of the building you can see that the “four” is written in Roman numerals as “IV”. However, on the actual clock on Independence Hall, the “four” is denoted by “IIII”, which has been the convention for clock faces for centuries.

49. Q-Tip specialty : RAP
Q-Tip is the stage name of rapper Kamaal Ibn John Fareed from Queens, New York. That’s about all I know …

51. Not freelancing, say : ON STAFF
“Free lance” was coined by Sir Walter Scott in his 1820 novel “Ivanhoe” in which he used the term to describe a medieval mercenary warrior. Forty years later, a freelancer was a journalist who did work for more than one publication without a long-term commitment.

56. Kind of artery or vein : FEMORAL
The femoral artery and femoral vein run up and down the leg, beside the femur.

The thigh bone, the femur, is the longest and the largest bone in the human body.

58. Semi-opponent : FRENEMY
A frenemy is someone who feigns friendship but who is actually an enemy or competitor.

Down
1. What a dolorimeter measures : PAIN
A dolorimeter is an instrument used to measure tolerance to pain or a pain threshold. To make measurements, pain is applied in a controlled way by increasing pressure, heat or perhaps electrical stimulation.

2. The Stroll, e.g. : LINE DANCE
“The Stroll” was both a song and a dance in the late fifties. “The Stroll” is a slow dance in a rock ‘n’ roll style. In the dance, men and women line up opposite each other and then each couple processes down between the two lines, making their own unique moves.

3. Tundra hunter : ARCTIC FOX
The arctic fox is a mammal that is remarkably well adapted to its native environment in the Arctic region of the northern hemisphere. One adaptation is that its thick fur is brown in the summer and white in the winter.

4. Grp. whose members 28-Down : NFL
More people attend an average game in the National Football League (NFL) than any other domestic sports league in the world.

9. Source of extra-large eggs : EMU
Emu eggs are very large, with a thick shell that is dark-green in color. One emu egg weighs about the same as a dozen chicken eggs.

12. Mansard alternative : GABLE
A mansard roof is a type of hip roof with two slopes on each side. The lower part of the roof has the steepest slope and is penetrated by several dormer windows. The style of roof takes its name from the French Baroque architect François Mansart.

26. Barbie greeting : G’DAY
“Barbie” is a nickname for “barbecue” in Australia.

27. Bowl on a range : WOK
“Wok” is a Cantonese word, the name of the frying pan now used in many Asian cuisines.

29. Time-traveling 1980s film character : MARTY MCFLY
Michael J. Fox was the first choice to play the lead character, Marty McFly, in 1985’s “Back to the Future”. Unfortunately, the producers of his TV sitcom “Family Ties” would not release Fox to make the movie, so the crew started filming with a different choice for the lead, actor Eric Stoltz. Weeks into production, it was decided that Stoltz was miscast and Fox was approached again. Eventually an arrangement was made with the “Family Ties” producers to “share” Fox, which led to an exhausting schedule for the actor. Fox worked seven days a week, filming “Family Ties” during the day and working on “Back to the Future” at night, usually till 2:30 in the morning.

32. Common soap ingredient : MELODRAMA
As almost everyone knows, the original soap operas were radio dramas back in the fifties. Given the structure of society back then, the daytime broadcasts were aimed at housewives working in the home. For some reason the sponsors of those radio shows, and the television shows that followed, were soap manufacturers like Procter & Gamble, Colgate-Palmolive and Lever Brothers. And that’s how the “soap” opera got its name …

34. Home of Paris : TROY
In Greek legend, Paris was the son of the king of Troy. Paris eloped with Helen, Queen of Sparta, and this act was a major trigger for the Trojan War. Also it was Paris who fatally wounded Achilles by shooting him in the heel with an arrow.

39. Honorary law deg. : LLD
The honorary degree of Legum Doctor (LL.D.) translates from the Latin as Doctor of Laws, a plural. This practice of using the plural originated in Cambridge University in England, as one was awarded an LL.D. after having been taught both Canon Law and Civil Law.

41. Three-time “Newhart” Emmy nominee : POSTON
Tom Poston was an actor from Columbus, Ohio. Poston had a successful television and film career starting in the 1950s, although I most remember him as the bumbling handyman on “Newhart”. Poston was actually married to Suzanne Pleshette who played the wife of Newhart’s character in “The Bob Newhart Show”.

42. Oscar, e.g. : GROUCH
Oscar the Grouch is the Muppet that lives in a garbage can. Oscar’s persona comes from various sources. He is named after Oscar Brand who was one of the board members of the Children’s Television Workshop, the backers for Sesame Street as the Muppets were being developed in the sixties. Oscar’s personality was inspired by an angry waiter that once served Jim Henson (father of the Muppets). And the voice was modeled on a grumpy New York cab driver encountered one day by Caroll Spinney, the puppeteer who brings Oscar to life.

43. Screw-up : BONER
“Boner” is one of those terms that I just don’t like because it can be used offensively. “Boner” can be used for a faux pas, an error.

46. Remove out of respect : DOFF
One doffs one’s hat, usually as a mark of respect. To doff is to take off, with “doff” being a contraction of “do off”.