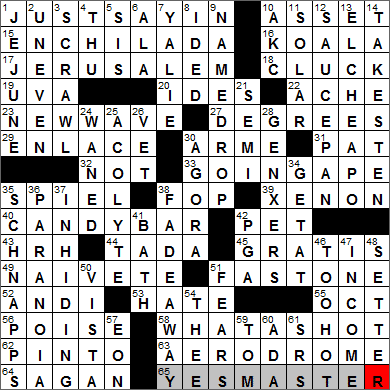 Today’s Wiki-est, Amazonian Googlies
Across
15. Taqueria treat : ENCHILADA
“Enchilada” is the past participle of the Spanish word “enchilar” meaning “to add chile pepper to”. An enchilada is a basically a corn tortilla rolled around some filling and then covered in chili pepper sauce.

16. Critter with humanlike fingerprints : KOALA
The koala really does look like a little bear, but it’s not even closely related. The koala is an arboreal marsupial and a herbivore, native to the east and south coasts of Australia. Koalas aren’t primates, and are one of the few mammals other than primates who have fingerprints. In fact, it can be very difficult to tell human fingerprints from koala fingerprints, even under an electron microscope.

17. Natalie Portman’s birthplace : JERUSALEM
The actress Natalie Portman was born in Jerusalem, Israel. She moved to the US with her family when she was just three years old.

19. Where R.F.K. and his brother Teddy went to law school : UVA
The University of Virginia (UVA) was of course founded by Thomas Jefferson, who sat on the original Board of Visitors with former US Presidents James Madison and James Monroe. In fact, the original UVA campus was built on land that was once a farm belonging to President Monroe.

20. 10/15, e.g. : IDES
There were three important days in each month of the old Roman calendar. These days depended on the cycles of the moon but were eventually “fixed” by law. “Kalendae” were the first days of each month, originally the days of the new moon. “Nonae” were originally the days of the half moon. And “idus” (the ides) was originally the day of the full moon, eventually fixed at the 15th day of a month. Well, actually the ides were the 15th day of March, May, July and October. For all other months, the ides fell on the 13th. Go figure …

31. Square for a roll : PAT
A pat of butter is usually a square that is applied to a roll.

35. Opening pitch : SPIEL
A spiel is a lengthy speech or argument designed to persuade, perhaps a sales pitch. “Spiel” comes to us from German, either directly (“spiel” is the German for “play”) or via the Yiddish “shpil”.

38. Many an ascot wearer : FOP
An Ascot tie is that horrible-looking (I think!) wide tie that narrows at the neck, which these days is only really worn at weddings. The tie takes its name from the Royal Ascot horse race at which punters still turn up in formal wear at Ascot Racecourse in England.

39. It’s a gas : XENON
The noble gases are those elements over on the extreme right of the Periodic Table. Because of their “full” complement of electrons, noble gases are very unreactive. The six noble gases that occur naturally are helium, neon, argon, krypton, xenon and radon.

40. One coming from Mars? : CANDY BAR
Having lived on both sides of the Atlantic, I find the Mars Bar to be the most perplexing of candies! The original Mars Bar is a British confection (and delicious) first manufactured in 1932. The US version of the original Mars Bar is called a Milky Way. But there is candy bar called a Milky Way that is also produced in the UK, and it is completely different to its US cousin, being more like an American “3 Musketeers”. And then there is an American confection called a Mars Bar, something different again. No wonder I gave up eating candy bars …

51. Flimflam : FAST ONE
Flimflam is another word for a confidence trick. The term has been in use since the 1500s, would you believe?

53. “A failure of imagination,” per Graham Greene : HATE
Graham Greene was a writer and playwright from England. Greene wrote some of my favorite novels, including “Brighton Rock”, “The End of the Affair”, “The Confidential Agent”, “The Third Man”, “The Quiet American” and “Our Man in Havana”. Greene’s books often feature espionage in exotic locales. Greene himself worked for MI6, the UK’s foreign intelligence agency. In fact, Greene’s MI6 supervisor was Kim Philby, the famed Soviet spy who penetrated high into British intelligence.

62. Old car with ignition trouble? : PINTO
The Pinto is a small car that was made by the Ford company from 1971 to 1980. The Pinto was of course named for the type of horse. Allegations were made in 1997 that the neck of the car’s fuel tank could easily break off in a collision leading to a deadly fire. However, the allegations were never really shown to be valid.

63. Spitfire landing locale : AERODROME
Aerodrome is a general term for a facility where aircraft take off and land. An aerodrome could be a small airstrip, a large commercial airport or even a military airbase. The term “aerodrome” is used quite often in the UK, but rarely here in the US.

The magnificent Supermarine Spitfire fighter aircraft is considered by most to have been key to the defeat of Germany’s Luftwaffe in the Battle of Britain. The plane was in production from the thirties through the fifties, and there were more Spitfires produced that any other British aircraft.

64. “Pale Blue Dot” author : SAGAN
Carl Sagan was a brilliant astrophysicist and a great communicator. Sagan was famous for presenting obscure concepts about the cosmos in such a way that we mere mortals could appreciate. He also wrote the novel “Contact” which was adapted into a fascinating 1997 film of the same name starring Jodie Foster.

Down
1. Dull : JEJUNE
The adjective “jejune” means “dull in the mind”. The term comes from the Latin “ieiunus” meaning “dry, barren”.

2. Like bars that are often near horses : UNEVEN
The uneven bars and vaulting horse are pieces of equipment used in women’s gymnastics.

4. Night to watch “The Office”: Abbr. : THU
The excellent sitcom “The Office” is set in a branch of a paper company in Scranton, Pennsylvania. If you haven’t seen the original UK version

starring Ricky Gervais, I do recommend you check it out. Having said that, the US cast has taken the show to a whole new level. Great television …

25. Assistant : ACOLYTE
The word “acolyte” comes from the Greek “akolouthos” meaning “companion, attendant, helper”. In the Christian tradition, an acolyte is an individual who assists some way in a ceremony, by lighting candles for example. In more general terms, an acolyte is a devoted follower or attendant.

28. Most Atari-playing kids : GEN-XERS
The term Generation X originated in the UK where it was the name of a book by Jane Deverson. Her book detailed the results of a study of British youths in 1964, contrasting their lifestyle to those of previous generations. It was Canadian author Douglas Coupland who was responsible for popularizing the term, with his more successful publication “Generation X: Tales for an Accelerated Culture”. By the latest accepted definition, Gen-Xers were born between 1961 and 1981.

At one point,  the electronics and video game manufacturer Atari was the fastest growing company in US history. However, Atari never really recovered from the video game industry crash of 1983.

30. Ancient meeting place : AGORA
In early Greece the “agora” was a place of assembly. Often the assemblies held there were quite formal, perhaps for the reading of a proclamation. Later in Greek history, things became less formal as the agora evolved into a market place. Our contemporary word “agoraphobia” comes from these agorae, in the sense that an agoraphobe has a fear of open spaces, a fear of “public meeting places”.

35. Brandy alternative : SCHNAPPS
“Schnapps” isn’t actually a German word, but is our English spelling of the German “Schnaps” (note the “pp” versus “p”). Germans use the word Schnaps to describe any strong alcoholic drink. We tend to use Schnapps to mean a liqueur, usually a sweet beverage flavored with fruit. “Schnaps” is a Low German noun meaning “swallow”.

38. Hard-to-block jumper, in hoops : FADEAWAY
Apparently a “fadeaway” is a jump shot in basketball, one in which the shooter is jumping backwards away from the basket, in order to distance himself or herself from an opponent trying to block the ball.

42. Grp. interested in long drives : PGA
The Professional Golfers’ Association (PGA) was founded in 1916 and today has its headquarters (unsurprisingly) in Florida, where so many golfers live. Back in 1916, the association was based in New York City.

48. Certain volleyball player : SETTER
In volleyball, the “set” is the second contact made by a team, the contact that is meant to “set up” an attacking shot.

59. Twain boy : TOM
Tom Sawyer is of course a favorite character created by Mark Twain. He turns up in four of Twain’s books:

60. Listerine bottle abbr. : ADA
The American Dental Association (ADA) is the largest and oldest national dental association in the world. Today the ADA is based in Chicago, but the association was founded in Niagara Falls, New York in 1859. The ADA started out as a group of 26 dentists and now has more than 152,000 members.

Listerine is an antiseptic mouthwash. The brand takes its name from Joseph Lister, the British surgeon and promoter of antiseptic surgery.