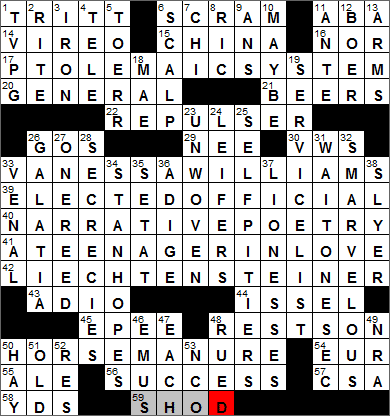 14. Olive-colored bird : VIREO
Vireos are pretty little birds native to the New World. Vireos’ wings and bodies are mostly grey, but their head and throats are often a lovely olive green.

15. World powerhouse in table tennis : CHINA
Ping-pong is called table tennis in the UK, where the sport originated in the 1880s. Table tennis started as an after-dinner activity among the elite, and was called “wiff-waff”. To play the game, books were stacked in the center of a table as a “net”, two more books served as “”rackets” and the ball used was actually a golf ball. The game evolved over time with the rackets being upgraded to the lids of cigar boxes and the ball becoming a champagne cork (how snooty is that?). Eventually the game was produced commercially, and the sound of the ball hitting the racket was deemed to be a “ping” and a “pong”, giving the sport its alternative name.

17. Bygone theory of astronomy : PTOLEMAIC SYSTEM
In astronomy, the Ptolemaic system (also called the geocentric model) describes an organization of the cosmos in which the Earth is at the center of the universe with all other celestial bodies orbiting around our planet.

30. Bugs : VWS
VW stands for Volkswagen, which translates from German into “people’s car”. The original “Volkswagen” was built under a directive from Adolf Hitler, who wanted a cheap car built that ordinary people could afford to purchase. He awarded the contract to engineer Ferdinand Porsche, whose name (paradoxically) would forever be associated with high-performance, expensive cars.

33. “Ugly Betty” actress : VANESSA WILLIAMS
Vanessa Williams has built quite a career for herself after briefly holding the 1983 Miss America title. Williams is now a successful actress and singer. On the big screen she did a fine job playing the lead opposite Arnold Schwarzenegger in 1996’s “Eraser”. On the small screen she had a major role in the hit comedy “Ugly Betty”. Williams is sometimes confused with fellow actress Vanessa A. Williams who is no relation.

40. “Idylls of the King,” stylistically : NARRATIVE POETRY
“Idylls of the King” is a cycle of twelve poems by Alfred, Lord Tennyson that retells the tale of King Arthur. One of the “idylls” is the story of Geraint and Enid. Tennyson’s Enid gave her name to the city of Enid, Oklahoma.

42. Alpine native : LIECHTENSTEINER
Liechtenstein is a tiny country with an area of just over 61 square miles, located in the Alps between Switzerland and Austria. Liechtenstein has the highest gross domestic product per person in the world. The country is a winter sports haven attracting lots of visitors, and is also a tax haven with a strong financial center. There are actually more registered companies in Liechtenstein than there are citizens!

44. Basketball Hall-of-Famer Dan : ISSEL
Dan Issel is a retired basketball player who played for the Kentucky Colonels of the ABA, and the Denver Nuggets of the NBA.

45. Thrust item : EPEE
The French word for sword is “épée”. In competitive fencing the épée is connected to a system that records an electrical signal when legal contact is made on an opponent’s body.

50. Balderdash : HORSE MANURE
“Balderdash” means a senseless jumble of words, and was originally (back before the late 1600s) a jumbled mix of liquids (like maybe beer and wine, or even beer and milk!).

57. Grp. in gray : CSA
The Confederate States of America (CSA) set up government in 1861 just before Abraham Lincoln took office. Jefferson Davis was selected as President of the CSA at its formation and retained the post for the life of the government.

58. Gridiron distance: Abbr. : YDS
We never used the word “gridiron” when I was growing up in Ireland (meaning a grill used for cooking food over an open fire). So, maybe I am excused for finding out relatively recently that a football field gridiron is so called because the layout of yard lines over the field looks like a gridiron used in cooking!

11. Deal preceder : ANTE
In a game of poker say, you need to ante up before the deal is made …

12. Participant in an 1899 conflict : BOER
There were two Boer Wars, the first fought between 1880 and 1881 and the second fought between 1899 and 1902. The Dutch settlers of the Boer republics took on the British Empire in both conflicts.

18. Risqué West : MAE
Mae West was always pushing the envelope when it came to the “sexy” side of show business, even in her early days in Vaudeville. One of the first plays in which West starred on Broadway was called “Sex”, a work she penned herself. The show was a sell-out, but city officials had it raided and West found herself spending ten days in jail after being convicted of “corrupting the morals of youth”. She started in movies in 1932, already 38 years old. West used her experience writing plays to rewrite much of the material she was given, and so really she was totally responsible for her own success and on-screen appeal.

19. Ones to whom an organization’s messages are sent : SERVICE LIST
I think that the generally accepted definition of a “service list” is a catalogue of the services that are provided by an organization. I am not sure if that is what the clue is referring to though …

24. Funny Carol and family : LEIFERS
Carol Leifer is a stand-up comedian who was discovered by David Letterman. Leifer has appeared on “Late Night with David Letterman” on over twenty-five different occasions.

26. Land visited by Paul in the New Testament : GALATIA
Galatia was an area in central Anatolia, which is now within the borders of modern Turkey. The land was settled by immigrant Gauls, which led to the name “Galatia”.

27. Clarinet need : ONE REED
The clarinet is a lovely-sounding instrument, isn’t it? The name comes from the Italian word “clarino” meaning “trumpet” with the “-et” suffix indicating “small”.

32. Elided phrase in a Gershwin song : ‘S MARVELOUS
“‘S Wonderful” is a song by written by George and Ira Gershwin written for the musical “Funny Face”. “‘S Wonderful” was also sung by Gene Kelly in the 1951 film “An American in Paris”.

33. Easily corrupted : VENAL
Someone described as venal is open to bribery.

34. One-seat carriages : STANHOPES
A stanhope was a small, horse-drawn carriage with a high seat and a closed back. The carriage was named for a Captain Henry Stanhope.

36. Verona’s river : ADIGE
The Adige is a river in the north of Italy, and the second longest river in the country after the River Po.

Three of William Shakespeare’s plays are set in Verona, a city in northern Italy:

46. Certain bird herd : EMUS
The emu has had a tough time in Australia since man settled there. There was even an “Emu War” in Western Australia in 1932 when migrating emus competed with livestock for water and food. Soldiers were sent in and used machine guns in an unsuccessful attempt to drive off the “invading force”. The emus were clever, breaking their usual formations and adopting guerrilla tactics, operating as smaller units. After 50 days of “war”, the military withdrew. Subsequent requests for military help for the farmers were ignored. The emus had emerged victorious …

49. Supporter of the Heller decision, 2008: Abbr. : NRA
District of Columbia v. Heller was a 2008 case decided by the US Supreme Court. The Court held that the US Constitution’s 2nd Amendment protected an individual’s right to own a firearm for lawful use.