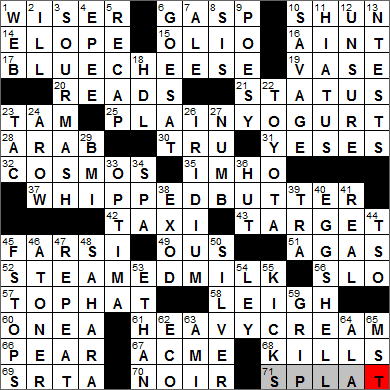 CROSSWORD SETTER: Jay Kaskel
THEME: Cryptic Dairy Products … each of the themed answers is a 2-word dairy product, but clued using an alternative meaning for the first word in the product as if it describes the cow providing the milk:

Today’s Wiki-est, Amazonian Googlies
Across
15. Mixed bag : OLIO
Olio is a term meaning a hodgepodge or a mixture, coming from the mixed stew of the same name. The stew in turn takes its name from the Spanish “olla”, the clay pot used for cooking.

17. Byproduct of a sad dairy cow? : BLUE CHEESE
The mold on blue cheese is actually from the genus Penicillium, the same genus of mold that is the source of many antibiotics.

19. Ming museum piece, maybe : VASE
The Ming Dynasty lasted in China from 1368 to 1644. The Ming Dynasty oversaw tremendous innovation in so many areas, including the manufacture of ceramics. Late in the Ming period, a shift towards a market economy in China led to the export of porcelain on an unprecedented scale, perhaps explaining why we tend to hear more about Ming vases than we do about porcelain from any other Chinese dynasty.

23. Tartan cap : TAM
A tam o’shanter is a man’s cap traditionally worn by Scotsmen. “Tams” were originally all blue (and called “blue bonnets”), but as more dyes became readily available they became more colorful. The name of the cap comes from the title character of Robert Burns’ poem “Tam O’Shanter”.

28. Oman man : ARAB
Oman lies on the southeast coast of the Arabian Peninsula and is neighbored by the OAE, Saudi Arabia and Yemen. The capital city of Muscat has a strategic location on the Gulf of Oman and has a history of invasion and unrest. Centuries of occupation by the Persians ended in 1507 when the Portuguese took the city in a bloody attack. The Portuguese held Muscat for much of the next one hundred years until finally being ousted by local Omani forces in 1648. A Yemeni tribe invaded the area in 1741 and set up a monarchy that has been in place in Oman ever since.

31. Rogers : YESES
The term “roger”, meaning “yes” or “acknowledged”, comes from the world of radio-telephony. The British military used a phonetic alphabet in the fifties that included Roger to represent the letter “R”. As such, it became customary to say “Roger” when acknowledging a message, with R (Roger) standing for “received”.

32. Old Carl Sagan series : COSMOS
Carl Sagan was a brilliant astrophysicist and a great communicator. Sagan was famous for presenting obscure concepts about the cosmos in such a way that we mere mortals could appreciate. He also wrote the novel “Contact” which was adapted into a fascinating 1997 film of the same name starring Jodie Foster.

43. Kohl’s competitor : TARGET
Target is the second-largest retailer in the country, with Walmart being the biggest.

45. Tehran tongue : FARSI
“Farsi” is one of the local names for Persian, an Iranian language.

Tehran is the capital of Iran and is the largest city in the Middle East, with a population of about 8.5 million. Iran has been around an awful long time and Tehran is actually the country’s 31st national capital. We really are only babies over here in the US …

51. Turkish V.I.P.’s : AGAS
“Aga” (also “agha”) is a title that was used by both civil and military officials in the Ottoman Empire.

58. Janet of “Psycho” : LEIGH
My guess is that the actress Janet Leigh’s most remembered performance is as the woman who gets killed in the shower in the Hitchcock classic “Psycho”. Leigh’s third husband was the actor Tony Curtis, and their daughter is the lovely Jamie Lee Curtis.

60. Fit to serve : ONE-A
The US government maintains information on all males who are potentially subject to military conscription, using what is called the Selective Service System(SS). In the event that a draft was held, men registered would be classified into groups to determine eligibility for service. Class 1-A registrants are those available for unrestricted military service. Other classes are 1-A-O (conscientious objector available for noncombatant service), 4-A (registrant who has completed military service) and 4-D (Minister of religion).

67. Brand in Road Runner cartoons : ACME
The Acme Corporation is a fictional company used mainly by Looney Tunes, and within the Looney Tunes empire it was used mostly in the “Road Runner” cartoons. Wile E. Coyote was always receiving a new piece of gear from Acme designed to finally capture the Road Runner, but the equipment just led to his downfall instead.

70. Film ___ : NOIR
The expression “film noir” has French origins, but only in that it was coined by a French critic in describing a style of Hollywood film. The term, meaning “black film” in French, was first used by Nino Frank in 1946. Film noir often applies to a movie with a melodramatic plot and a private eye or detective at its center. Good examples would be “The Big Sleep” and “D.O.A”.

71. Paintball sound : SPLAT
The “paint” in paintball isn’t actually paint, but rather a mix of gelatin and food coloring.

Down
1. Part of WWW : WEB
The World Wide Web was effectively the invention of English computer scientist Tim Berners-Lee. The key to Berner-Lee’s invention was bringing together two technologies that already existed: hypertext and the Internet. I for one am very grateful …

4. Sword you score points with : EPEE
The French word for sword is “épée”. In competitive fencing the épée is connected to a system that records an electrical signal when legal contact is made on an opponent’s body.

7. Ginger ___ : ALE
The brand most closely associated with ginger ale is Canada Dry. “Canada Dry Pale Ginger Ale” was first formulated in 1904 by a Canadian chemist called John McLoughlin from Ontario. Prohibition in the United States helped sales of the drink as it was particularly effective in masking the taste of illegally-produced homemade liquor.

8. Start of a cheer : SIS
“Sis boom bah” is apparently a popular cheer in American high schools and colleges (I didn’t know that!). The term was also used by Johnny Carson when he was playing the character Carnac the Magnificent.

10. Cannibal, e.g. : SAVAGE
The term “cannibalism” was coined by the Spanish, working from the name of the Carib people of the Lesser Antilles. The Spanish explorers of the Caribbean believed that the Carib people ate human flesh for food, but apparently this was untrue (although there was a war ritual that involved some chewing of an enemy’s flesh). The eating of human flesh has been noted throughout history, in many parts of the world. In fact, Fiji in the South Pacific was once known as “Cannibal Isles”.

11. Temporary gap : HIATUS
A “hiatus” is a break or opening in a material object, or in time. “Hiatus” is Latin for “opening”.

13. ’40s beach blasts, briefly : N-TESTS
The testing of US nuclear weapons by the US at Bikini Atoll in the middle of 1946 went by the codename “Operation Crossroads”. The tests used A-bombs and were designed to measure the effect of blasts on navy vessels. There were three tests planned, but the third had to be cancelled as the Navy couldn’t decontaminate the ships used in the second test.

18. Good cholesterol, for short : HDL
HDL (high-density lipoprotein) is a compound that is used to transport fats around the body. When HDL is combined with (i.e. is transporting) cholesterol, it is often called “good cholesterol”. This is because HDL seems to remove cholesterol from where it should not be, say on the walls of arteries, and transports it to the liver for reuse or disposal. Important stuff …

LDL (low-density lipoprotein) is one of the compounds responsible for transporting fats around the body. When LDL is combined with cholesterol it can be referred to as “bad cholesterol”. This is because LDL actually transport cholesterol into the inner walls of blood vessels leading to atherosclerosis.

22. Camry maker : TOYOTA
The Toyota Camry takes its name from the Japanese word for “crown”. Toyota management likes the idea of naming their cars after the word “crown”, as they did with the Toyota Crown, followed by the Toyota Corona (Latin for crown) and the Toyota Corolla (Latin for small crown).

23. Tic ___ (breath mint) : TAC
Tic Tacs aren’t American candy (as I always mistakenly believed). Tic Tacs are made by the Italian company Ferrero, and were introduced in 1969.

26. Metal between osmium and platinum on the periodic table : IRIDIUM
The element Iridium is represented by the symbol Ir. It is a metal that’s very hard, and is in fact the second densest of all the elements (after Osmium). It is also the metal that is most resistant to corrosion.

29. Alternative to Ascap : BMI
ASCAP (the American Society of Composers, Authors and Publishers) collects licence fees for musicians and distributes royalties to composers whose works have been performed. BMI (Broadcast Music Incorporated) provides the same service.

33. Kia model : OPTIMA
Kia Motors is the second largest manufacturer of cars in South Korea, behind Hyundai (and Hyundai is a part owner in Kia now). In recent years, Kia has focused on sales into Europe, and has been remarkably successful.

34. Place to get a facial : SPA
The word “spa” migrated into English from Belgium, as Spa is the name of a municipality in the east of the country that is famous for its healing hot springs. The name “Spa” comes from the Walloon word “espa” meaning “spring, fountain”.

36. Gilligan’s island home : HUT
The iconic sitcom “Gilligan’s Island” ran for only three seasons, although that added up to a total of 98 episodes. The show is about a small band of castaways who are trying to escape their island and return to Hawaii. The last episode originally aired in 1967. The castaways did eventually get off the island in a 1978 TV movie called “Rescue from Gilligan’s Island”, but ended up back on the island at the end of the film.

38. Gen. follower : EXOD
In the Bible, the Book of Genesis (Gen.) is followed immediately by the Book of Exodus (Exod.).

44. Chinese menu general : TSO
General Tso’s chicken is an American creation, often found on the menu of a Chinese restaurant. The name General Tso may be a reference to General Zuo Zontang of the Qing Dynasty, but there is no clear link.

45. Lens settings : F-STOPS
Varying the f-stop in a lens varies how big the lens opening (the aperture) is when a photograph is taken. Smaller apertures (higher f-stop values) admit less light, but result in sharper photographs.

48. Much of Libya and Algeria : SAHARA
The name “Sahara” means “greatest desert” in Arabic and it is just that, a great desert covering almost 4 million square miles of Northern Africa. That’s almost the size of the United States.

53. One of the Coen brothers : ETHAN
I think it’s great to see two brothers working together and being so successful. Joel and Ethan Coen are two movie producers and directors who both live in New York City. The Coen brothers do love the movie-making business and they even married industry “insiders”. Ethan’s wife is film editor Tricia Cooke, and Joel is married to one of my favorite actresses, the lovely Frances McDormand.

54. Science writer Willy : LEY
Willy Ley was a German rocket scientist who did much of his work here in the US. Unlike many of his compatriots, Ley left Nazi Germany and moved the US prior to WWII, in 1935. He wrote books about space travel that were very approachable and helped popularize the concept with the general public. His book “The Conquest of Space” was published in 1949.

64. ___ king : A LA
Chicken à la King is a dish made with diced chicken in a cream sauce served over rice or pasta. There are several claims about the origin of the dish, but the most credible (to me) is that it was created in the 1890s in the Bellevue Hotel in Philadelphia by the hotel’s chef William King.