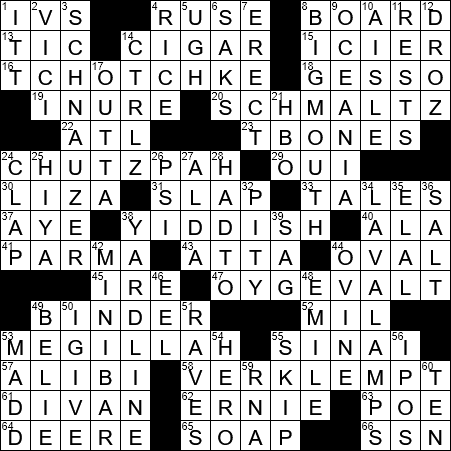 Constructed by: Scot Ober & Jeff Chen
Edited by: Will Shortz

Themed answers are YIDDISH phrases that have made their way into English:

One might see an intravenous drips (IV) in an intensive care unit (ICU).

“Twice-Told Tales” is a two-volume collection of short stories by Nathaniel Hawthorne that were published in 1837 and 1842. The books earned the title as each story had previously been published in a magazine or annual.

“Megillah” is the Hebrew word for “scroll”. In the Hebrew Bible there are Five Scrolls (Megillot), namely “Song of Songs”, “Ruth”, “Lamentations”, “Ecclesiastes” and “Esther”.

58. Choked up with emotion : VERKLEMPT

“Verklempt” is a Yiddish adjective meaning “overcome with emotion”.

Divans are essentially couches without backs or arms. The design originated in the Middle East, where the couches were commonly found lining the walls of an office that was known as a “divan” or “diwan”, meaning “government office”.

The Edgar Allan Poe Awards (the Edgars) are presented annually by the Mystery Writers of America. There are several categories of awards. For example, the Ellery Queen Award honors “writing teams and outstanding people in the mystery-publishing industry”. The Raven Award is presented to non-writers, who contribute to the mystery genre.

3. Dog with a bearded muzzle : SCHNAUZER

The schnauzer breed of dog originated in Germany in the 1600s. The name “schnauzer” is a colloquial term meaning “moustache”, derived from the German for “snout”. The name is apt, given the breed’s distinctive snout.

4. Crosstown rival of the University of Houston : RICE

9. Locale of Tuvalu and Nauru : OCEANIA

Tuvalu is a Polynesian island nation that was formerly called the Ellice Islands. It lies midway between Hawaii and Australia. Tuvalu is the third least populous sovereign state in the world with under 11,000 inhabitants, ahead of Vatican City and Nauru.

12. Physician who was once a regular on “The Oprah Winfrey Show” : DR OZ

Home Box Office (HBO) is the oldest continuously-operating pay TV service in the US, having launched in 1972. HBO is a favorite of mine as I really like many of the HBO made-for-television movies and especially the HBO original series. Among the list of original series from HBO are “Mildred Pierce”, “The Pacific”, “John Adams”, “Big Love”, “Extras”, “The Wire”, “Sex and the City”, “From the Earth to the Moon”, “The Sopranos” and “Band of Brothers”. What great television …

The lava lamp was invented in 1960 by a British man, Edward Craven-Walker. The “lava” is a mixture of wax and carbon tetrachloride, floating in a water/glycerol mix. The wax reduces in density as it picks up heat from the incandescent bulb in the lamp’s base. The wax rises, cools, and then sinks to the bottom of the liquid only to be heated again.

Israir and El Al are both airlines based in Israel. El Al is the flag carrier for the country, and Israir is said to model itself on the American low-cost airline JetBlue.

Candace Lightner lost her 13-year-old child to a drink driver in 1980. Soon after, Lightner formed the group Mothers Against Drunk Driving (MADD).

54. Bolívar, in much of South America : HERO

Simón Bolívar was a military and political leader who led a revolution that overthrew Spanish rule in Venezuela. Bolívar’s military exploits continued after independence, resulting in the conquest of Ecuador, Peru and Bolivia. The latter was named was named for Simón Bolívar.