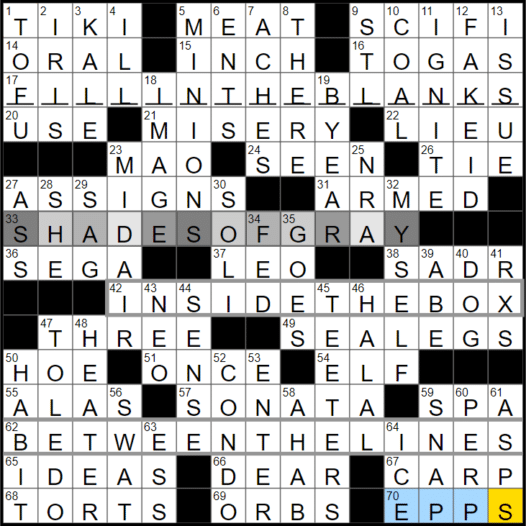 Constructed by: Daniel Kantor
Edited by: Will Shortz

Today’s Theme (according to Bill): The Clue’s in the Grid

Today’s themed answers are clued with visual elements in the grid:

The Sonata is one of Hyundai’s most successful models, having been introduced in 1985 and still being sold today. The original model didn’t make it to the North American market as it had problems meeting emission standards. The first Sonatas hit this side of the Pacific in 1988, and were assembled in Bromont, Quebec.

68. Stuff from which some suits are made? : TORTS

The most famous whale-hunting ship in fiction has to be Herman Melville’s Pequod, which was featured in his novel “Moby Dick”. The Pequod is a skippered by the maniacal Captain Ahab, and the young chief mate is the thoughtful and intellectual Starbuck. Starbuck’s name was lifted and used by a Seattle-based coffee company.

60. One in custody, informally : PERP

The $ sign was first used for the Spanish American peso, in the late 18th century. The peso was also called the “Spanish dollar” (and “piece of eight”). The Spanish dollar was to become the model for the US dollar that was adopted in 1785, along with the $ sign.