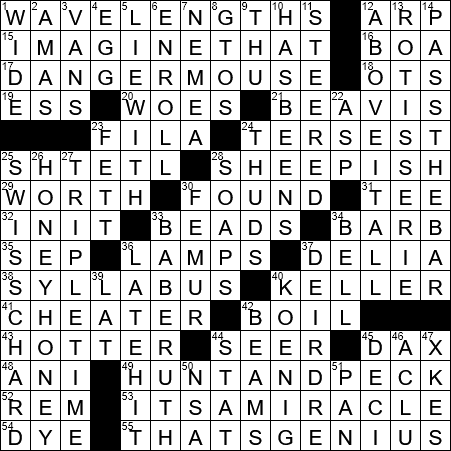 18. Some buzzer followers, for short : OTS

“Beavis and Butt-Head” is an adult cartoon television show and film. The show ran on MTV, which is only one reason why I’ve never seen it …

The Yiddish word for “town” is “shtot”, and so “shtetl” is the diminutive form meaning “small town”. The fictional shtetl featured in the musical in “Fiddler on the Roof” is called Anatevka, which is also the title of my favorite song from the show.

Delia Ephron is the sister of the more famous Nora Ephron, and is a screenwriter and producer in her own right. Among Delia’s writing credits is the 2005 movie “The Sisterhood of the Traveling Pants”.

Helen Keller became a noted author despite been deaf and blind, largely through the work of her teacher, Anne Sullivan. Keller was left deaf and blind after an illness (possible meningitis or scarlet fever). when she was about 18 months old. She was to become the first deaf and blind person to earn a Bachelor of Arts degree. The relationship between Sullivan and Keller is immortalized in the play and film called “The Miracle Worker”.

Minute Rice is a brand of “instant rice”, rice that has been pre-cooked and dehydrated. Using instant rice saves about ten minutes and cooking time, but many of the rice’s natural nutrients have been lost in the factory dehydration process.

“Hunt and peck” is a way to describe two-fingered typing.

An oocyte is an immature egg cell involved in reproduction.

7. Where Hercules slew the lion : NEMEA

When the incredibly successful sitcom “Friends” was in development it was given a working title “Insomnia Cafe”. This was changed to “Friends Like Us”, before final going to air as “Friends”.

12. Supercilious : ABOVE IT ALL

“Supercilious” is a such a lovely-sounding word, with a not-so-lovely meaning. Someone described as supercilious is lofty with pride, haughtily contemptuous. The term derives from the Latin “supercilium” meaning “eyebrow” (actually “above the eyelid), the idea being that a person is prone to raise his or her eyebrows to express haughtiness.

22. “My baby at my breast,” to Shakespeare’s Cleopatra : ASP

Boba Fett is one of the principal bad guys in the “Star Wars” universe. Boba Fett appears in Episode V: The Empire Strikes Back” and in “Episode VI: Return of the Jedi”. A young version of Boba Fett also appears in “Episode II: Attack of the Clones”.

Only three members of the quartet that made up the pop group ABBA were born in Sweden. Anni-Frid Lyngstad was born in Norway just after the end of WWII, the daughter of a Norwegian mother and a father who was German soldier and a member of the German occupying force during the war. The father returned to Germany with the army, and in 1947, Anni-Frid was taken with her family to Sweden. They left fearing reprisals against those who dealt with the German army during the occupation.

A mazurka is a Polish folk dance. The great French-Polish composer Frédéric Chopin was known for writing many mazurkas for solo piano.

The New York Yankees baseball team of the late twenties had a particularly successful core group of batters. That line-up was nicknamed “Murderers’ Row”. The most famous “Murderers’ Row” played with the 1927 Yankees, and was made up of:

Deirdre of the Sorrows is a tragic heroine of Irish legend. Her story figures prominently in Irish literature, including a play by J. M. Synge titled “Deirdre of the Sorrows”. Synge left the work unfinished when he died in 1909, but it was completed by William Butler Yeats and Synge’s fiancée, and premiered in 1910.

The muscles known as the “lats” are the latissimi dorsi, the broadest muscles in the back. “Latissimus” is the Latin for “broadest” and “dorsum” is Latin for “back”.

XK and XK-E are models of Jaguar motor car.

We knew them as E-type Jags in my part of the world growing up, but they were marketed over in the US as the Jaguar XK-E line. The XK-E was manufactured from 1961 to 1974.