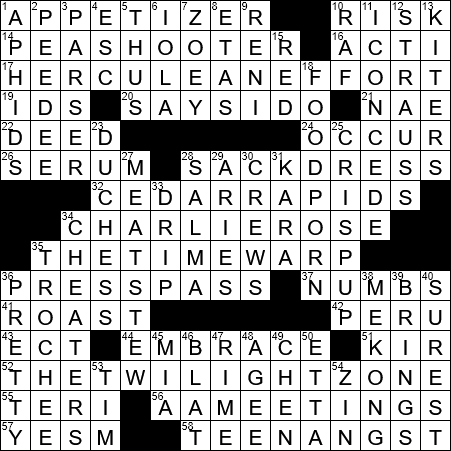 “Nae” is Scottish vernacular for “no”.

35. Dance in which “you bring your knees in tight” : THE TIME WARP

“The Rocky Horror Picture Show” has to have the most devout cult-following of any movie ever made. Famously, fans attending a midnight show of the film will dress up in the outrageous costumes used in the film, and bring props with them. The props bear little relation to the storyline, but a tradition of using certain props in a particular way has been established. For example, at one point a character proposes a toast, and the audience throws toast around the theater. Go figure …

52. TV series whose first episode was titled “Where Is Everybody?” : THE TWILIGHT ZONE

The iconic television series called “The Twilight Zone” first aired in 1959 and then ran for 156 episodes before being pulled in 1964. “The Twilight Zone” was revived for four years in the late eighties, and was also spun-off into a movie by Steven Spielberg in 1983.

Mark Twain’s famous character Tom Sawyer had a few family members. He had an Aunt Polly, an Aunt Sally Phelps, a cousin Mary and half-brother Sid.

2. River from the Appalachians : PEE DEE

The Pee Dee River takes its name from the Pee Dee tribe of Native Americans from the southeast of the United States.

Iola is a city in southeast Kansas. The city is named for Iola, wife of J. F. Colburn, one of the owners of the land that was chosen as a site for the town in the late 1850s.

“Zoey 101” is a TV show that aired from 2005 until 2008 on Nickelodeon. Jamie Lynn Spears plays the title role, a teenage student attending a Southern California boarding school. Apparently, “Zoey 101” is the most expensive show that Nickelodeon ever produced.

“Elektra” is an opera by Richard Strauss that premiered in 1909. The work is based on Greek mythology, and is centered on Elektra, the daughter of the Greek king Agamemnon.

13. Their checks don’t check out : KITERS

Kara Zor-El is Superman’s cousin, and is also known as Supergirl. Supergirl’s father and Superman’s father were brothers.

A crib is a plagiarism. It is most commonly the copying of an answer in an examination.

35. Counterpart of an iamb : TROCHEE

At over 2,700 miles in length, the Mekong is the twelfth longest river in the world. It rises in the Tibetan Plateau and empties into the South China Sea at the famed Mekong delta system in Vietnam.

48. Jon who wrote and illustrated “Smart Feller, Fart Smeller and Other Spoonerisms” : AGEE