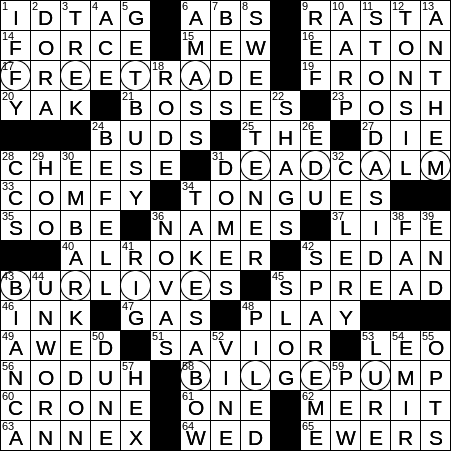 Names of CHEESES are SPREAD throughout each themed answer, and are circled in the grid:

6. Part of the body that crunches work : ABS

Blossoms are the flowers of a tree that bears stone fruit, e.g. cherries, peaches, apples and oranges. The blossoms provide pollen that is necessary for cross-pollination between individual trees.

As part of a fundraiser to benefit the military and USO, weatherman Al Roker did a non-stop, 34-hour weather forecast on NBC in November, 2014. The event was nicknamed a “Roker-thon”, and set a new Guinness World Record. Roker reproduced the event in different forms in 2015 and 2017. For Roker-thon 2, Al reported on the weather from all fifty states and Washington, D.C. in the same week. For Roker-thon 3, he visiting colleges around the country and participated in record-setting stunts such as the longest conga line on ice, and the largest human letter.

58. Device to remove water from a ship : BILGE PUMP

7. Where flowers and oysters grow : BEDS

To shag (I am reliably informed, never having played a game of baseball in my life!) is to chase and catch a fly ball.

In getting on and off a seagoing vessel, one embarks and debarks. The terms come from the name of the small ship known as a barque.

As one might expect, the Waldorf salad was created at the Waldorf Hotel in New York City (now the Waldorf-Astoria), back in the 1890s. The classic version of the Waldorf salad is made from apples, celery and walnuts dressed in mayonnaise and served on a bed of lettuce. Anyone who is a fan of the BBC sitcom “Fawlty Towers” will remember how much trouble Basil Fawlty had coming up with a Waldorf salad for an American guest, as the kitchen was “out of Waldorfs” …

Bianca Jagger is a human rights activist. She was also the first wife of Mick Jagger, lead singer of the Rolling Stones.

A bigwig is someone important. The use of the term harks back to the days when men of authority and rank wore … big wigs.