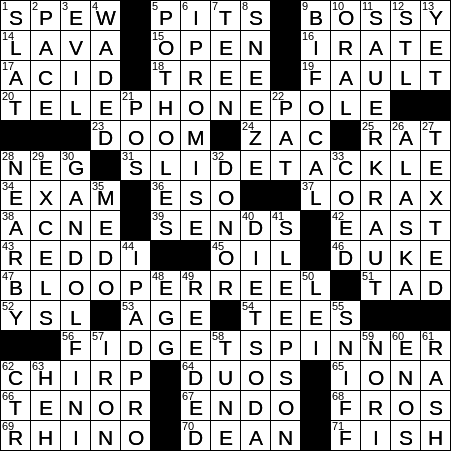 Themed answers each end with an item used to FISH:

There are two broad categories of peaches: freestones and clingstones. Clingstones (also “cling peaches”) have flesh that clings tightly to the pit. Freestones are easier to consume as the flesh separates easily from the pit.

A fidget spinner is toy that supposedly can be used for stress relief. Sales of fidget spinners really took off in 2017, although versions of the toy existed back in the early nineties.

The sound made by crickets is usually referred to as chirping, although the scientific term is “stridulation”. The sound is made by male crickets as they rub the top of one wing along a serration on the other wing.

Luciano Pavarotti was one of the most celebrated tenors of all time. He was able to appeal to audiences beyond the traditional fans of opera, helped by his performances with the Three Tenors: Pavarotti, Placido Domingo and Jose Carreras. Pavarotti made his final performance on stage at the 2006 Winter Olympics in Turin, Italy, where he sang his famous rendition of the moving aria “Nessun dorma” and brought the house down. Pavarotti passed away from pancreatic cancer the following year, at the age of 71.

Benjamin Franklin was a prolific inventor, coming up with bifocal glasses among other things. Franklin never filed for patents for his creations, and wrote:

… as we enjoy great advantages from the inventions of others, we should be glad of an opportunity to serve others by any invention of ours; and this we should do freely and generously.

30. James ___, portrayer of Tony Soprano on “The Sopranos” : GANDOLFINI

The actor James Gandolfini is perhaps best known for playing Mafia boss Tony Soprano in the HBO show “The Sopranos”. For my money, one of Gandolfini’s best performances was in the 2013 romantic comedy “Enough Said”, opposite Julia Louis-Dreyfus. Sadly, Gandolfini passed away just before that film was released.

The classic dish called quiche is made with eggs (“oeufs” in French). Even though the quiche is inextricably linked to French cuisine, the name “quiche” comes from “Kuchen”, the German word for cake,. The variant called “quiche lorraine” includes bits of smoked bacon as an ingredient.

61. What talcum powder may prevent : RASH