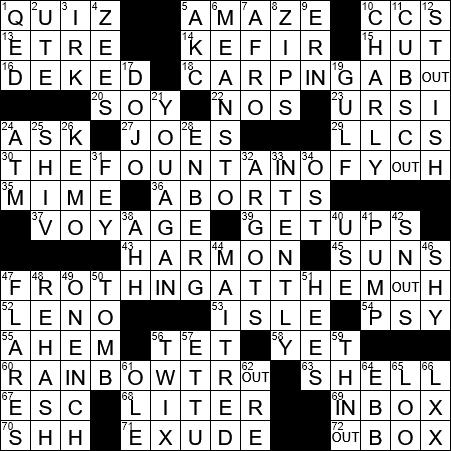 We have a rebus puzzle today, with some BOXES in the grid containing the letters IN or OUT:

Fluids in an intravenous drip (IV) might be measured in cubic centimeters (ccs).

The verb “to be” translates into German as “sein”, and into French as “être”.

18. Finding fault with : CARPING ABOUT

Soy sauce is made by fermenting soybeans with a mold, in the presence of water and salt. Charming …

Trader Joe’s is a grocery store chain based in Monrovia, California that was founded in 1979 by Joe Coulombe. Trader Joe’s is very popular where I live, even though it stocks less than 10% of the items found in a typical grocery store. 80% of the items on the shelves are sold under a Trader Joe’s brand name, and are obviously chosen well. One of the more successful items is Charles Shaw wine, known as “Two Buck Chuck” here in California as it sold for many years at a price of $1.99.

29. They can be taxed like partnerships, for short : LLCS

30. Goal for Ponce de León : THE FOUNTAIN OF YOUTH

The legend of the Fountain of Youth gained a lot of traction in the 1500s because a story developed that the Spanish explorer Ponce de León traveled to what is now Florida in search of the legendary spring.

Juan Ponce de León was a famous Spanish explorer and conquistador. Ponce de León led the Europeans to Florida, and it was he who gave the state its name (Spanish for “Flowery Land”). He was injured on his last voyage to Florida, supposedly by a poisoned arrow, and died from his wound in Havana, Cuba.

Actor Mark Harmon is best known today for playing the lead in the drama show “NCIS”. Harmon played a similar character for several episodes on “The West Wing”. Mark is the son of a football star Tom Harmon, and was the brother-in-law of rock and roll star Ricky Nelson and automotive executive John DeLorean (through his sisters). Harmon has been married since 1987 to actress Pam Dawber, who played the female title role on “Mork & Mindy”.

The steelhead and rainbow trout are actually the same species. The difference is that rainbow trout spend almost their whole lives in freshwater. Steelheads spend much of their lives in estuaries or open ocean, returning to freshwater to spawn.

There are two letters Z (zees) in the middle of the word “puzzle”.

The American Kennel Club (AKC) is the organization that handles registration of purebred dogs The AKC also promotes dog shows around the country including the famous Westminster Kennel Club Dog Show.

“Shiv” is a slang term for a weapon crudely fashioned to resemble a knife. Mostly we hear of shivs that have been fashioned by prison inmates to do harm to others.

Dick Enberg was a sportscaster famous for uttering the words “Oh, my!” after particularly notable plays.

“Argot” is a French term. It is the name given in the 17th century to “the jargon of the Paris underworld”. Nowadays argot is a set of idioms used by any particular group, the “lingo” of that group.

The full title of a “maître d’” is “maître d’hôtel”, which means “master of the hotel”.

49. Three barleycorns, as defined by Edward II : ONE INCH

Edward II was King of England from 1307 to 1327. It was Edward II who lost to the Scottish forces led by Robert the Bruce at the Battle of Bannockburn. Edward was also the first monarch to found colleges at Oxford and Cambridge.

A sepulcher is a burial vault. The term “sepulcher” ultimately comes from the Latin “sepelire” meaning “to bury, embalm”.

The famous university city of Cambridge in the England takes its name from an Old English term meaning “Bridge on the River Granta”. The river in question is now called the River Cam, with “Cam” being a back formation from “Cambridge”.