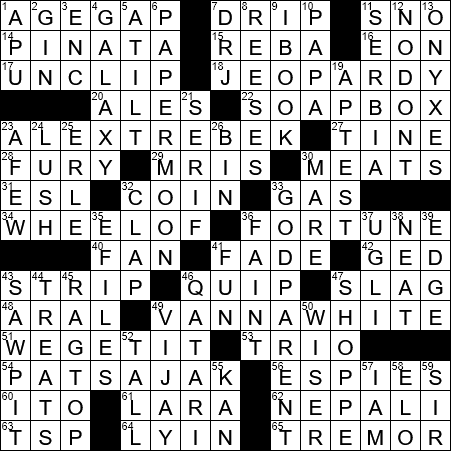 Constructed by: Michael Black
Edited by: Will Shortz

Themed answers refer to two of the most successful TV game shows, shows that are usually placed back-to-back in the schedules:

1. Just one year, for Venus and Serena Williams : AGE GAP

15. McEntire with a twang in her voice : REBA

18. Popular program usually shown back to back with 34-/36-Across : JEOPARDY!

Alex Trebek has been the host of “Jeopardy!” since the syndicated version of the game show launched in 1984. Trebek has missed just one episode since then, when he and host of “Wheel of Fortune” Pat Sajak swapped roles in 1997 as an April Fool’s joke. In 2014, Trebek picked up the Guinness World Record for hosting the most episodes of a game show.

34. With 36-Across, popular program usually shown back to back with 18-Across : WHEEL OF …

Pat Sajak took over the hosting of “Wheel of Fortune” from Chuck Woolery back in 1983 and has been doing the job ever since. Sajak had a short run as a talk show host in 1989/1990 and used to sub quite often for Larry King and Regis Philbin.

Although Kathmandu is the capital city of the lofty nation of Nepal, it sits in a bowl-shaped valley and so is only at an elevation of 4,600 ft. Air pollution is a huge problem in the city. Industry and residents launch a lot of smog into the air, and given the surrounding geography and climate, any pollution blown away during the day tends to fall back into the valley at night.

3. Accompanier of a letter inside an env. : ENC

6. Movie for which Tatum O’Neal won an Oscar : PAPER MOON

Julius Erving is a retired professional basketball player who was known as “Dr. J”, a nickname he picked up in high school. Dr. J was a trailblazer in many ways, being the first player associated with slam dunking and other moves above the rim.

Hungary is a country in Central Europe that has become a popular tourist destination since the collapse of the Eastern Bloc in 1989. Hungarians refer to themselves as “Magyars”.

A saw pit is a pit over which large pieces of lumber were placed to allow two men to saw tree trunks into planks. One man works above the pit, and the other in the pit below, with the pair using a large two-handled saw. The saw was called a whipsaw or pitsaw.

Topeka is the capital of Kansas, and is located on the Kansas River in the northeast of the state. The name “Topeka” was chosen in 1855 and translates from the Kansa and the Ioway languages as “to dig good potatoes”. The reference isn’t to the common potato but rather to the herb known as the prairie potato (also “prairie turnip”), which was an important food for many Native Americans.