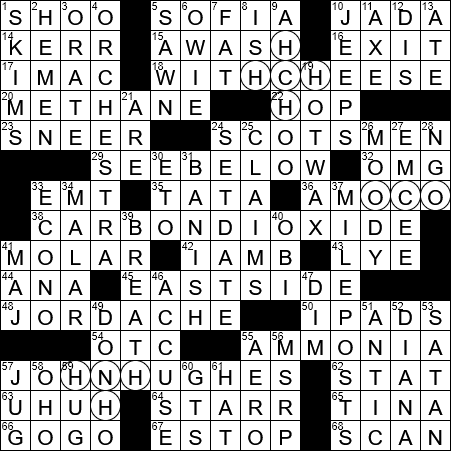 Today’s Theme (according to Bill): What a Gas!

Themed answers are gases, and there’s a molecule of each gas shown in the grid by the circled letters:

5. European capital whose name most people incorrectly accent on the second syllable : SOFIA

Jada Pinkett Smith is an actress from Baltimore, Maryland. Pinkett Smith’s most famous role is the human rebel Niobe in “The Matrix” series of movies. Back in 1990, she auditioned for the TV show “The Fresh Prince of Bel-Air”, to play the girlfriend of the character played by Will Smith. She didn’t get the role but did get Will Smith, as the couple were married in 1997.

“OMG” is text-speak for “Oh My Gosh!” “Oh My Goodness!” or any other G-words you might want to use …

45. Where the lowest-numbered avenues in Manhattan are : EAST SIDE

Jordache is an American clothing company noted for its designer jeans.

Ammonia is a colorless gas with a very strong smell. The compound has the chemical formula NH3. The name “ammonia” comes from salt deposits (actually the salt “ammonium chloride”) that the Romans collected near the Temple of Amun in ancient Libya.

John Hughes was a very successful director whose name is associated with many teen films. Great examples are “Ferris Bueller’s Day Off” and “The Breakfast Club”, two of my all-time favorite movies.

“Sixteen Candles” is a 1984 John Hughes movie starring Molly Ringwald as a sophomore suffering through the day of her 16th birthday. The family has overlooked her birthday as everyone is focused on her older sister, who is getting married the next day. A cute film, but not nearly as good as Hughes’ next film “The Breakfast Club”, which also starred Molly Ringwald. Young actor Anthony Michael Hall also appears in both movies.

Go-go dancing started in the early sixties. Apparently, the first go-go dancers were women at the Peppermint Lounge in New York City who would spontaneously jump up onto tables and dance the twist. It wasn’t long before clubs everywhere started hiring women to dance on tables for the entertainment of their patrons. Out in Los Angeles, the “Whisky a Go Go” club on Sunset Strip added a twist (pun intended!), as they had their dancers perform in cages suspended from the ceiling, creating the profession of “cage dancing”. The name “go-go” actually comes from two expressions. The expression in English “go-go-go” describes someone who is high energy, and the French expression “à gogo” describes something in abundance.

The term “estop” means to block or stop by using some legal device. “Estop” comes from Old French, in which “estopper” means “to stop up” or “to impede”.

2. Charles Atlas and others : HE-MEN

10. Vehicles made for rough terrain : JEEPS

27. One leading the festivities : EMCEE

The singer and entertainer Don Ho apparently had a pretty liberal arrangement with his wife. When Ho was touring with his two backing singers, Patti Swallie and Elizabeth Guevara, all three of them shared a room together. He had two children with each of his roommates, giving a total of ten kids including the six he had with his wife. The arrangement was quite open, it seems, with all ten kids visiting each other regularly. To each his own …

“Tiny Bubbles” was the signature song of singer and entertainer Don Ho. Written by Leon Pober, the song was intended for Lawrence Welk, but the famous bandleader turned it down.

Charles, Prince of Wales married Lady Diana Spencer in 1981 at St. Paul’s Cathedral in London. The wedding was a huge television event, with about 750 million people tuning in worldwide. Despite the event being billed as a fairytale wedding, the couple separated in 1992 and divorced in 1996.

56. Letters on an auto sticker : MSRP