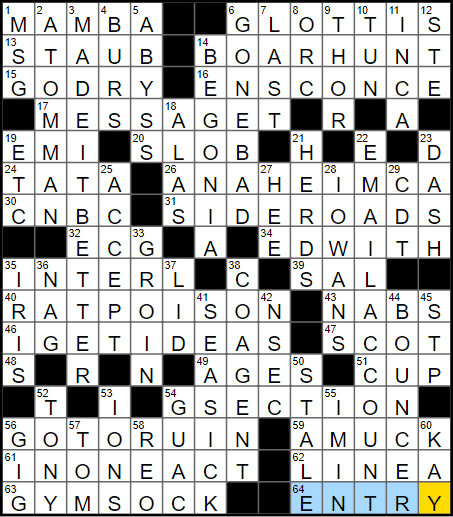 Today’s Theme (according to Bill): Stranded while Solving

Themed answers each include one of the words THREAD, LACE or STRING. Those words snake up and down between two rows as they work across the grid:

Rusty Staub had a relatively long career in baseball, having played his first game at the age of 19 and his last at age 41. Staub was one of only three players who hit home runs in the majors before the age of 20 as well as after the age of 40. The others are Gary Sheffield (never heard of him!) and Ty Cobb (heard of him!).

To ensconce oneself, one settles securely or comfortably somewhere. Back in the late 1500s, “to ensconse” meant “to cover with a fort” as a “sconse” is a small defensive fort or earthwork.

Parlophon was founded in 1896 as a German company, with the British branch called Parlophone Records opening for business in 1923. The biggest act to record with Parlophone was undoubtedly the Beatles, before the band launched its own label called Apple.

CNBC is a business news channel owned by NBC. Launched in 1989, CNBC was known as the Consumer News and Business Channel up until 1991.

32. Hosp. procedure with a readout : ECG

Sodium carbonate is a well known as a water softener sold for use in laundry, and is variously described as Sal Soda, Washing Soda and Soda Crystals.

Tony Martin was an actor and singer from San Francisco. He had hits in the thirties, forties and fifties such as “Walk Hand in Hand”, “Stranger in Paradise” and “I Get Ideas”. Martin’s second wife was actress and singer Cyd Charisse.

Scotland is sometimes referred to as the Land of Cakes. The name is a reference to the unleavened and unsweetened oatcakes that were a traditional staple.

Lex Luthor is the arch-nemesis of Superman in comics. Luthor has been portrayed in a number of guises in the comic world as well in movies and on the small screen. For example, he appeared as Atom Man in the 1950 film series “Atom Man vs. Superman”, and was played by actor Lyle Talbot, opposite Kirk Alyn’s Superman.

A “tun” is a barrel, often a large barrel used in winemaking. The term “tun” came to be a measure of volume, originally 252 gallons of wine. The weight of such a volume of wine was referred to as a “tun”, which evolved into our contemporary unit “ton”.

Inti was the sun god worshiped by the Incas. Images depicting Inti are featured on the national flags of several nations, including Argentina and Uruguay.

Drake University is a private school in Des Moines, Iowa.

“Nanosecond” is more correctly abbreviated to “ns” (as opposed to “nsec”) and really is a tiny amount of time: one billionth of a second.

REO Speedwagon is an American rock band that formed in 1967, and is still going strong. The band’s biggest hits are “Keep On Loving You” (1980) and “Can’t Fight This Feeling” (1985). The founding members chose the name for the REO Speed Wagon flatbed truck. Note that the band’s name is one word “Speedwagon”, whereas the vehicle’s name uses two words “Speed Wagon”.