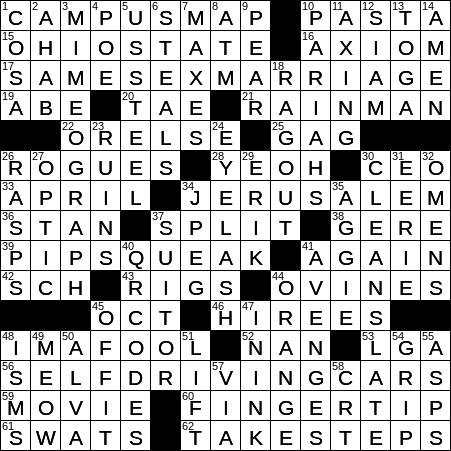 Constructed by: David Liben-Nowell
Edited by: Will Shortz

The concept of same-sex marriage isn’t a new one by any means, as there are references to such legal arrangements in the days of the Roman Empire and the Ming Dynasty in China.

In the animated TV show called “The Simpsons”, Grampa Abe Simpson is voiced by Dan Castellaneta, the same actor who provides the voice for Homer.

“Rain Man” is an entertaining and thought-provoking film released in 1988 starring Tom Cruise and Dustin Hoffman. It’s all about a self-possessed yuppie (Cruise, appropriate casting!) who discovers he has a brother who is an autistic savant (Hoffman). Hoffman won the Best Actor Oscar for his performance, and “Rain Man” won the Best Picture award.

“The Last Emperor” is a 1987 biographical film about Puyi, the last Emperor of China. “The Last Emperor” was unique in that it was the first time the Chinese government allowed filming in the Forbidden City in Beijing. In fact, Queen Elizabeth II was on a state visit to China the same time that filming was taking place, and the Chinese government gave priority to filming, so the British royal party could not visit the Forbidden City.

Michelle Yeoh is an actress from Malaysia who appeared in several Hong Kong action films in which she did her own stunts and martial arts scenes. Her most famous performance was in the 2000 movie “Crouching Tiger, Hidden Dragon”, although I best know her for playing opposite Pierce Brosnan in the Bond film “Tomorrow Never Dies”.

34. Destination of Muhammad in his Night Journey : JERUSALEM

Jerusalem is one of the oldest cities in the world, with the oldest part of Jerusalem having been settles in the 4th millennium BCE. The city is considered holy in all three of the big Abrahamic traditions of Judaism, Christianity and Islam and as a result is one of the crucial issues to be resolved in the Israeli-Palestinian conflict.

The 2000 movie “Dr. T & the Women” is a pretty good film, starring Richard Gere in the title role. It’s a romantic comedy about a gynecologist, and the women in his private and public life. The list of actresses playing those women is impressive, and includes Helen Hunt, Farrah Fawcett, Laura Dern, Shelley Long, Kate Hudson and Liv Tyler.

“M” is a German thriller written and directed by Fritz Lang that was released in 1931. The film starred Peter Lorre in his first major role. Before playing in “M”, Lorre was known for his comic roles. He played the villain “M”, a role in which he very much became typecast in Hollywood.

5. Company whose headquarters were built from its own product : US STEEL

US Steel was founded in 1901 with a merger of Carnegie Steel, Federal Steel and National Steel. The resulting company immediately became the world’s first billion-dollar corporation. US Steel reorganized in 1986 and changed its name to USX Corporation, but reverted to the US Steel name in 2001. I think I’m right in saying that the USX name was chosen because US Steel is traded under the symbol “X” on the New York Stock Exchange …

12. Neighbor of India and China on a Risk board : SIAM

A ragout is dish from French cuisine, and is highly-seasoned stew of either meat or fish. The name “ragout” comes from the verb “ragouter”, “to revive the taste”. The Italian “ragù” is a term borrowed from the French that describes a meat-based sauce served with pasta.

A “fricassée” is a dish containing meat that has been cut up, sautéed and braised, and then served in a white sauce. The French term fricassée is thought perhaps to be a combination of the the verbs “frire” (to fry) and “casser” (to break into pieces).

The JPEG file format was created by the Joint Photographic Experts Group (JPEG), hence the name.

The Home Depot is the largest home improvement retail chain in the US, ahead of Lowe’s. Home Depot opened their first two stores in 1979. The average store size if just over 100,000 square feet. The largest Home Depot outlet is in Union, New Jersey, and it is 225,000 square feet in size. That’s a lot of nuts and bolts …

The garter snake is found right across the continent, It is in fact the most widely distributed genus of reptile in North America, being found anywhere from the Southeast Alaska to Central America.