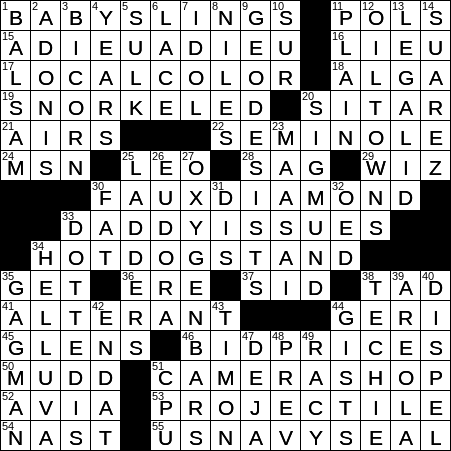 15. Repetitive farewell from “The Sound of Music” : ADIEU ADIEU

“So Long, Farewell” is a song from the stage musical “The Sound of Music”.

19. Swam with the fishes, say : SNORKELED

The frankfurter sausage that is typically used in a North American hot dog get its name from Frankfurter Würstchen. The latter is a German sausage that is prepared by boiling in water, just like a hot dog frank.

After a career with CBS and NBC, Roger Mudd was more recently an anchor for the History Channel. Mudd is perhaps best known for his 1979 interview with Senator Edward Kennedy. Ted Kennedy’s lackluster responses to some of Mudd’s questions were cited as the reason support plummeted for the senator’s 1980 Presidential nomination.

Saucony is a sportswear manufacturer that is known mainly making athletic shoes. The company was founded in 1898 on the banks of Saucony Creek in Pennsylvania, hence the name.

Thomas Nast was an American caricaturist and cartoonist. Nast was the creator of the Republican Party elephant, the Democratic Party donkey, Uncle Sam and the image of the plump and jocular Santa Claus that we use today. Thomas Nast drew some famous cartoons in which he depicted the Tammany Society as a vicious tiger that was killing democracy. Nast’s use of the tiger symbology caught on and was used by other cartoonists to harp at the society.

The building known as Tammany Hall was home to the Tammany Society, an organization in New York City that came to be the political machine behind the Democratic Party that held sway in New York State from the late-18th century to the mid-20th century. The society was named for Tamanend, a leader of the Native American Lenape people.

Something described as bicorn is crescent-shaped, or two-horned. The term comes from the Latin “cornu” meaning “horn”.

9. Scientists who measure the exact shape and size of Earth : GEODESISTS

The term “geodesic” applied originally to the shortest route between any two points on the Earth’s surface. In this sense, a geodesic is an arc, a segment of a great circle that goes around the whole of the Earth. A geodesic dome is a structure that gets its strength from an interlocking network of triangular elements. The sides of those triangles are geodesics, arced segments of great circles that encompass the dome.

Luis Suárez is soccer player on the Barcelona football team, as well as the Uruguay national team. As well as having a reputation as great soccer striker, Suárez is known for biting at least three of his opponents on the field (believe it or not!).

Sigmund Freud was an Austrian neurologist, and founder of the psychoanalytic school of psychiatry. One of Freud’s tenets was that our dreams are a necessary part of sleep as they prevent the dreamer from awakening due to desire for unfulfilled wishes. The dream’s content represents those unfulfilled wishes and satisfies the desire.

The Masai (also “Maasai”) are a semi-nomadic people found in Kenya and Tanzania. They are semi-nomadic in that over the years they have been migrating from the Lower Nile Valley in northwest Kenya, and are moving into Tanzania.

33. What Hawaii has that Alaska lacks? : DOTTED I’S

Timon of Athens was noted for renouncing society, for being someone who despised mankind. Timon started out life as a wealthy man, but he lost all his money by pandering to the needs of his friends. Without money, Timon’s friends deserted him. Timon became rich again when he found a pot of gold, and so his friends sought him out once more. Timon was very embittered and so drove everyone away and lived the rest of his life as a hermit. Centuries after he died, Timon of Athens was to become the title character in “Timon of Athens”, a play by William Shakespeare