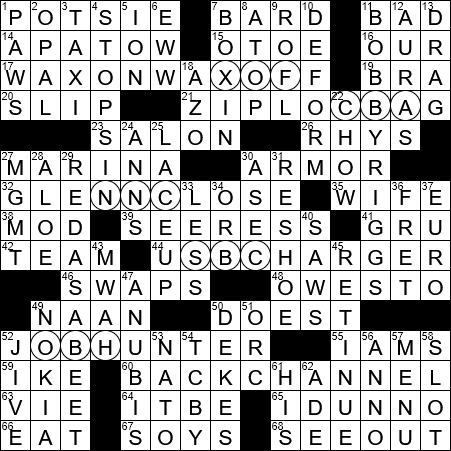 Themed answers each include the name of a TV CHANNEL written BACKWARDS:

Anson Williams plays the lovable Warren “Potsie” Weber character on “Happy Days”. After “Happy Days” finished its run, Williams moved into directing and has directed episodes of “Star Trek: Deep Space Nine”, “Xena: Warrior Princess”, “Sabrina the Teenage Witch”, “Melrose Place”, “Beverly Hills 90210” and other shows. But Williams’ true claim to fame has to be that he is the second cousin of Dr. Henry Heimlich, who invented the Heimlich Maneuver!

Judd Apatow is known for producing the TV series “Freaks and Geeks” and “Undeclared”. Those shows aren’t my cup of tea, but he also collaborated with Lena Dunham to create the show “Girls”. I could drink that tea all day long. “Girls” is a very entertaining series …

17. Teaching catchphrase popularized by “The Karate Kid” : WAX ON, WAX OFF (back FOX)

A “slipway” or “slip” is a ramp on the shore in which boats can “slip” into the water. This “slipping” into the water was is literally the case in a shipyard where a vessel’s hull slips off the ramp after it is coated with grease.

21. Resealable container for chips or cheese : ZIPLOC BAG (back ABC)

Ziploc re-sealable storage bags came on the market in 1968.

“Wide Sargasso Sea” was written by Jean Rhys and first published in 1966. It’s a clever work, written as a sort of prequel to Charlotte Bronte’s famous “Jane Eyre”, which dates back to 1847.

Portia de Rossi is an actress from Australia who played Nellie Porter on “Ally McBeal” and Lindsay Bluth/Fünke on “Arrested Development”. Off the screen, de Rossi is famous as the wife of Ellen DeGeneres, whom she married in 2008.

The Detroit Lions are the NFL team that plays home games at Ford Field in Detroit, Michigan. The team was founded way back in 1929 as the Portsmouth Spartans from Portsmouth, Ohio. The Spartans joined the NFL during the Great Depression as other franchises collapsed. However, the Spartans couldn’t command a large enough gate in Portsmouth so the team was sold and relocated to Detroit in 1934.

The Chicago Bears were founded in Decatur, Illinois in 1919 and moved to Chicago in 1921. The Bears are one of only two franchises in the NFL that were around at the time of the NFL’s founding (the other is the Arizona Cardinals, who were also based in Chicago in 1921).

44. Connection point for a smartphone cable : USB CHARGER (back CBS)

Iams dog food was introduced by the animal nutritionist Paul Iams. He felt that household pets were suffering somewhat by being fed a diet of table scraps, so he developed a dry dog food that he felt was more nutritious and suitable for pet dogs. He founded the Iams company, now part of Procter & Gamble, in 1946.

“Let It Be” was the last album that the Beatles released as an active group playing together. The title song “Let It Be” was written by Paul McCartney, and it is clearly one of his own favorites. McCartney says that he was inspired to write the song after having had a dream about his mother (who had died some years earlier from cancer). In fact he refers to her (Mary McCartney) in the line “Mother Mary comes to me”. Paul’s first wife, Linda, is singing backing vocals on the song, the only time she is known to have done so in a Beatles recording. 18 years after that 1970 recording was made, Paul, George and Ringo sang “Let It Be” at a memorial service for Linda, who was also lost to cancer. Sad stuff, but a lovely song …

11. Loser of tennis’s Battle of the Sexes : BOBBY RIGGS

Bobby Riggs was a World No. 1 tennis player in the thirties and forties, both as an amatuer and a professional. However, Riggs is best remembered for playing “The Battle of the Sexes” match against Billie Jean King in 1973. Riggs was defeated by King in three straight sets.

13. What a Pride Day parader might dress in : DRAG

37. Currency of Italy or France : EURO

A retinue is a body of aides who attend an important person. The term comes from the Old French “retenue” that had the same meaning, although the literal translation is “that which is retained”. The idea is that the aides are retained to attend the VIP.

Anubis is the Greek name for the Ancient Egyptian deity called Inpu, a god associated with death and mummification. Anubis’s role was to protect the dead and their tombs.

I do enjoy classical guitar music, but there isn’t a huge choice on CD. There is one very special piece called “Gran Vals” by Francisco Tárrega, written in 1902. This piece has a unique reputation as it contains a phrase that was once the most listened-to piece of music in the whole world. Just a few bars into the work one can hear the celebrated Nokia ringtone!