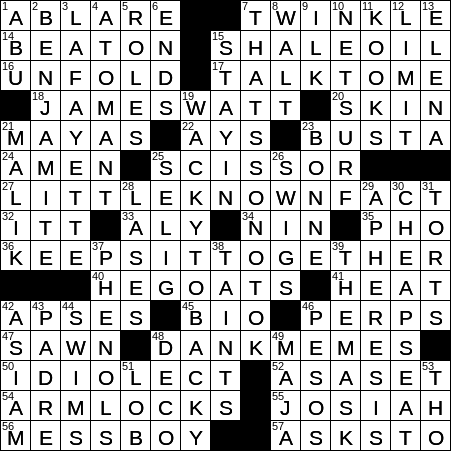 21. Early people who used a base-20 numerical system : MAYAS

34. “Children of the Albatross” author : NIN

54. Martial arts holds that are hard to escape : ARMLOCKS

In the excellent television show “The West Wing”, President Jed Bartlet is played by Martin Sheen.

The Marquis de Lafayette was a French military officer who fought in the American Revolutionary War, as well as having a notable career back in France. But, his links to America were strong, so that when he died in 1834 he was buried in Paris under soil transported from the Revolutionary War battlefield at Bunker Hill.

Atom Ant is a cartoon character introduced by Hanna-Barbera in 1965. He is a tiny superhero who fights villains such as Ferocious Flea and a mad scientist named Professor Von Gimmick.

21. Zayn formerly of One Direction : MALIK

Zayn Malik is singer from Yorkshire in the north of England who found fame with the boy band One Direction. Malik quit the band in 2015 to launch a solo career. A year later, Malik became the first male artist to hit the number-one spot in both the UK and US charts with both a debut single (“Pillowtalk”) and a debut album (“Mind of Mine”).

You’ll find me there …

Phenol is also known as carbolic acid. Phenol can be used as an embalming fluid, although more usually bodies are embalmed using formaldehyde. Injections of phenol were used extensively by the Nazis during the WWII particularly in concentration camps, as a means of execution.

Jim Carrey is a comedian and actor from Newmarket, Ontario. Carrey’s big break in films came with the title role the first “Ace Ventura” film, in 1994. My favorite of his big screen performances is in the fascinating film “The Truman Show”, released in 1998.

Francisco Goya was a Spanish painter, who was often called the last of the Old Masters and the first of the moderns. Two of Goya’s most famous works are “The Nude Maja” and “The Clothed Maja”.