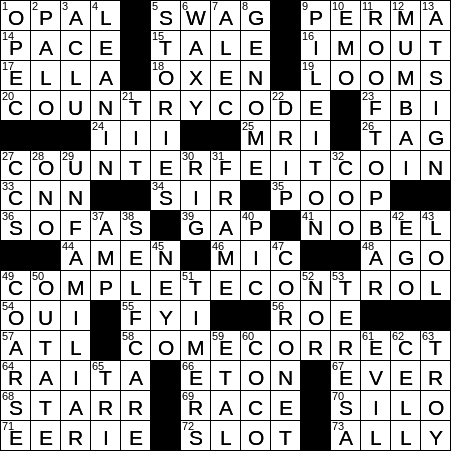 Themed answers are each 2-word phrases, with both words starting with the letter sequence CO:

Permafrost is by definition soil that has been below the freezing point of water for two years or more. Usually permafrost is covered by a thin layer of soil that thaws during the warmer months and which can sustain life. Plants can grow in the active layer, but their roots cannot penetrate the permafrost below.

“Poop” is a slang term meaning “relevant and up-to-date information”. Back in the 1940s, a “poop sheet” was a bulletin with the latest information.

Raita is a condiment served in Indian restaurants, made from yogurt flavored with coriander, cumin, mint and cayenne pepper.

5. The Empire State Building has 102 of them : STORIES

The word “wiseacre” dates back to the late 1500s, when it was a botched translation of the Middle Dutch word “wijsegger” meaning “soothsayer”. Originally, there was no derogatory connotation to the word, but over time a “wiseacre” had become a know-it-all.

11. Place to see the town while painting the town red? : ROOFTOP BAR

It’s possible that the phrase “paint the town red”, meaning to go on a raucous spree, actually dates back to a particular event. It is well documented that in 1837, the Marquis of Waterford and a group of friends went wild one day in the town of Melton Mowbray in Leicestershire, England. They actually painted a whole load of the town’s buildings red. Which came first though, the incident or the idiom? Well, that is the question …

12. Most populous city in India : MUMBAI

Nathan’s Famous has held a Hot Dog Eating Contest every July 4th since 1916, and always at the same location on Coney Island.

An ameba (or “amoeba”, as we spell it back in Ireland) is a single-celled microorganism. The name comes from the Greek “amoibe”, meaning change. The name is quite apt, as the cell changes shape readily as the ameba moves, eats and reproduces.

In horse racing, a trifecta is a bet in which the first, second and third place finishers are predicted in the correct order. The same bet can be made in jai alai competitions, predicting which the top three finishers.