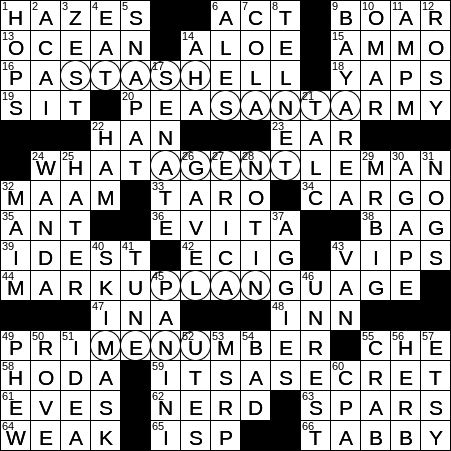 Themed answers each include a SECRET word spelled out in circled letters in the grid. That word is often preceded by “SECRET”:

The earliest known mention of the name “Atlantic” for the world’s second-largest ocean was in Ancient Greece. The Greeks called the ocean “the Sea of Atlas” or “Atlantis thalassa”.

“Solo: A Star Wars Story” is a 2018 installment in the “Star Wars” anthology series of films. This one tells the story of a young Han Solo and his young (190-year-old) sidekick Chewbacca. Solo, famously played by Harrison Ford in the original movies, is portrayed by American actor Alden Ehrenreich.

44. It may allow a text document to be displayed on a web page : MARKUP LANGUAGE (giving “secret plan”)

Apparently, some fast-food restaurants maintain a “secret menu” of unadvertised selections that customers hear about on the grapevine.

2. Berry marketed as a superfood : ACAI

Somebody described as testy is touchy, irritably impatient. The term comes into English from Old French, ultimately deriving from “testu” meaning “stubborn, headstrong”, literally “heady”. So, our word “testy” comes from the same root as the French word “tête” meaning “head”.

“Cola Wars” is the phrase used to describe the competing marketing campaigns of Coca Cola and PepsiCo. Coke is winning …

Telnet is a network protocol, i.e. a defined format for controlling communications between devices in a computer network.

9. Where San Francisco and Oakland are : BAY AREA

Omar Epps is the actor who played Eric Forman on the excellent television series “House”. Prior to playing Dr. Forman, Epps had a recurring role playing Dr. Dennis Gant on “ER”. And, in another link to the world of medicine, Epps was born in Savannah, Georgia to single mom, Dr. Bonnie Epps.

The small hammer that one raps on a table or desk to call a meeting to order, or perhaps to signify a sale at an auction, that’s called a gavel. The term “gavel” is actually American English, a word that emerged in the early 19th century.

The vehicle we call a “van” takes its name from “caravan”, and is a shortened version of the older term. Back in the 1600s, a caravan was a covered cart. We still used the term “caravan” in Ireland to describe what we call a “mobile home” or “recreational vehicle” here in the US.