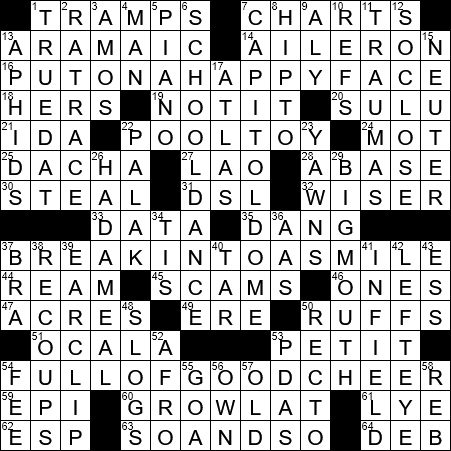 We have some grid art today, with the black squares at the center outlining a smiley face. Themed answers are all SMILEY, HAPPY and CHEERFUL:

“Bye Bye Birdie” is a stage musical set in 1958, and first performed in 1960 on Broadway. It was inspired by the real-life events surrounding Elvis Presley getting drafted into the Army in 1957. The “Elvis” character in the musical is called Conrad Birdie, a play on the name of the singer Conway Twitty. One of the songs from the show is “Put on a Happy Face”.

Dachas are usually second homes in Russia and the former Soviet Union that are located outside the city limits in rural areas. Residents/tenants of dachas are often called “dachniks”.

The abbreviation “DSL” originally stood for Digital Subscriber Loop, but is now accepted to mean (Asymmetric) Digital Subscriber Line. DSL is the technology that allows Internet service be delivered down the same telephone line as voice service, by separating the two into different frequency signals.

Ocala National Forest is a large protected area covering over 600 square miles of Central Florida. Included in the bounds of the forest is the US Navy’s Pinecastle Bombing Range. Navy planes drop about 20,000 bombs annually at Pinecastle, although only a few hundred are live munitions.

A petit four is a small confection served at the end of a meal, either as a dessert or with coffee. The name “petit four” is French for “small oven”.

We use “rat race” figuratively to describe an endless, pointless pursuit. The term comes from the laboratory, where one might imagine rats racing around a maze in search of some cheese.

7. Washington image seen on the back of a $50 bill : CAPITOL DOME

10. Ones whistling while they work? : REFS

Paneer is a South Asian cheese, most commonly encountered in Indian dishes here in North America. Paneer is a “fresh cheese”, one that is made just before it is consumed.

42. Part of the head hidden on the jack of spades : LEFT EYE