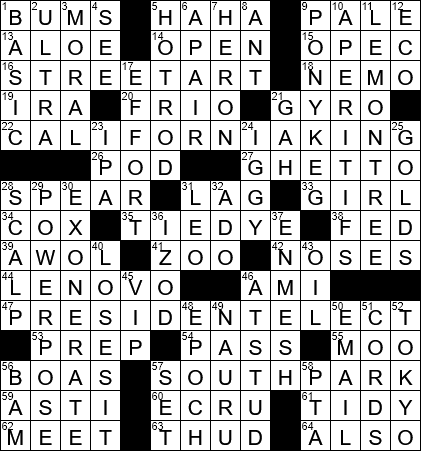 Themed clues point to relatively short answers. Those answers have been EXPANDED by writing out fully an abbreviation included in the answer:

15. Grp. whose members have reserves : OPEC

The original “ghetto” was an island in Venice that was used for confining Venetian Jews. The same island was used to store slag from a foundry, and “getto” was the Venetian word for “slag”. The term “ghetto” spread across Europe, at the beginning always associated with repressed Jewish populations. Ultimately it came to mean any urban area housing a minority group under economic and social pressure.

31. Annoyance for an online gamer : LAG

59. Italian province or its capital : ASTI

In an ant colony, soldier ants differ from worker ants in that they have stronger mandibles and are hence more suitable for fighting. However, when they aren’t fighting, that basically carry out the same functions as the workers. All worker and soldier ants are sterile females.

10. They get drunk before dinner : APERITIFS

Iggy Azalea is the stage name of Australian rapper Amethyst Kelly. I haven’t heard of her outside of crosswords …

The chain of fitness centers called Gold’s Gym was founded in 1965 by Joe Gold in Venice Beach, California.

The Russian author Leo Tolstoy is best known for his novels “War and Peace” and “Anna Karenina”. He also wrote the much-respected novellas “Hadji Murad” and “The Death of Ivan Ilyich”.

46. Offered for breeding : AT STUD

The word “stud”, meaning “a male horse kept for breeding”, is derived from the Old English word “stod”, which described a whole herd of horses. The term “stud” can be used figuratively for a “ladies’ man”.