Constructed by: Peter A. Collins & Bruce Haight
Edited by: Will Shortz 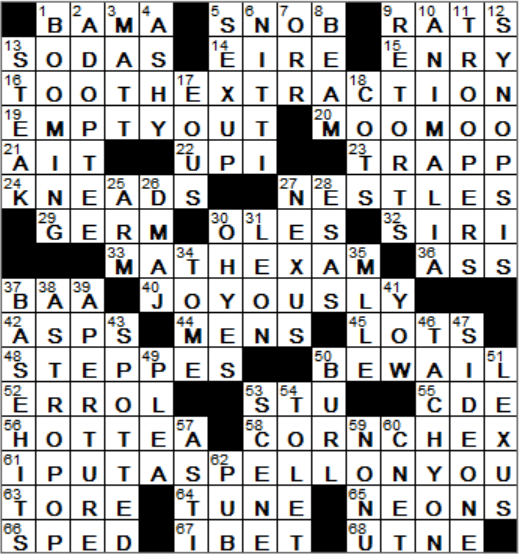 Today’s Reveal Answer: I Put a Spell on You

Today’s grid features three incidents of HEX sitting right on top of YOU. So, the constructors PUT A SPELL ON YOU:

Back in the 1780s, a “snob” was a shoemaker or a shoemaker’s apprentice. By the end of the 18th century the word was being used by students at Cambridge University in England to refer to all local merchants and people of the town. The term evolved to mean one who copies those who are his or her social superior (and not in a good way). From there it wasn’t a big leap for “snob” to include anyone who emphasized their superior social standing and not just those who aspired to rank. Nowadays a snob is anyone who looks down on those considered to be of inferior standing.

The characters in the cartoon series “Peanuts” were largely drawn from Charles Schultz’s own life, with shy and withdrawn Charlie Brown representing Schultz himself.

Aits are little islands found in a river. Aits aren’t formed by erosion, but by the deposition of silt over time. As a result, aits often have a long and narrow shape running parallel to the banks as the sediment builds up with the flow of the water. Many of the islands in the River Thames in England have been given the name “Ait”, like Raven’s Ait in Kingston-upon-Thames, and Lot’s Ait in Brentford.

The von Trapps portrayed in the musical “The Sound of Music” were a real family, as is well known. In the musical and film, the eldest daughter is “Liesl”, although in real life her name was Agathe. Agathe came with her family to the US in 1938, and operated a private kindergarten in Baltimore, Maryland for 35 years. Agathe passed away in 2010.

“Toreador” is an old Spanish word for a bullfighter, but it’s a term not used any more in Spain nor in Latin America. In English we use the term “toreador”, but in Spanish a bullfighter is a “torero”. A female bullfighter in a “torera”.

Actor Errol Flynn was born 1909 in Tasmania, Australia where he was raised. In his twenties, Flynn lived in the UK where he pursued his acting career. Around the same time he starred in an Australian film “In the Wake of the Bounty” and then appeared in a British film “Murder at Monte Carlo”. It was in the latter film that he was noticed by Warner Brothers who brought him to America. Flynn’s non-American heritage shone through even while he was living the American dream in California. He regularly played cricket, along with his friend David Niven, in the Hollywood Cricket Club.

Influenza (flu) is an ailment that is caused by a virus. The virus is readily inactivated by the use of soap, so washing hands and surfaces is especially helpful in containing flu outbreaks.

The original Chex cereal was introduced in 1937 by Ralston Purina, although it is now produced by General Mills. Ralston Purina had a logo with a checkerboard square on it, which gave the pattern to the cereal as well as its name. Chex used characters from the “Peanuts” comic strip in its advertising for many years.

61. Much-covered 1956 Screamin’ Jay Hawkins song … hinting at what happens three times in this puzzle’s solution : I PUT A SPELL ON YOU

“Dayglo” is a registered trademark used for an ink or paint that glows when exposed to a black light in a darkened room. When Dayglo paint is viewed in daylight the colors can look particularly vivid because they respond to the UV light that is present in sunlight.

3. Groening who created “The Simpsons” : MATT

Matt Groening is a cartoonist. He created two successful animated shows for television, namely “The Simpsons” and “Futurama” (neither of which I understand!).

6. Frank who was a cohort of Al Capone : NITTI

7. Hockey great whose jersey number rhymed with his name : ORR

Johann Pachelbel was a composer from Germany active in the Baroque Era. Pachelbel’s music was very popular during his own lifetime. Today, his best-known work is his “Canon in D”, which has become a very popular choice for contemporary wedding ceremonies.

Kings of Leon is an American rock band formed in Nashville, Tennessee in 1999. The band members are all related to each other and chose the group’s name in honor of their common grandfather whose given name is Leon.

Switzerland is a landlocked country in Central Europe. It is a country comprising four distinct linguistic and cultural regions: German, French, Italian and Romansh. Switzerland is a very developed nation, and has the highest nominal wealth per adult in the world. Having visited, I can attest to the steep prices encountered by tourists …

Paul McCartney wrote the song “Yellow Submarine” with Ringo Starr in mind as the lead singer. As he said himself, because it was for Ringo, he wrote something that wasn’t “too rangey”. It turned out be more like a children’s song, and a couple of years later in 1968, the song was used as the title for an animated film. The song is full of sound effects, including John Lennon blowing through a straw into a bowl of water to create a “bubbling”, and Lennon and McCartney speaking into tin cans to create the sound of the captain and officer exchanging orders. And at one point in the recording, a backing vocalist led everyone around the studio on a conga line, while pounding on a bass drum. What a way to make money, and lots of it …

“Flat”, in the sense of an apartment or condominium, is a word more commonly used in the British Isles than on this side of the pond. The term “flat” is Scottish in origin, in which language it used to mean “floor in a house”.

“Non-U” is a term used in the UK that originated in the fifties, referring to those who are “not upper class”. i.e. working class. In effect, “the U” are the “upper” class, and “the non-U” are the working class.