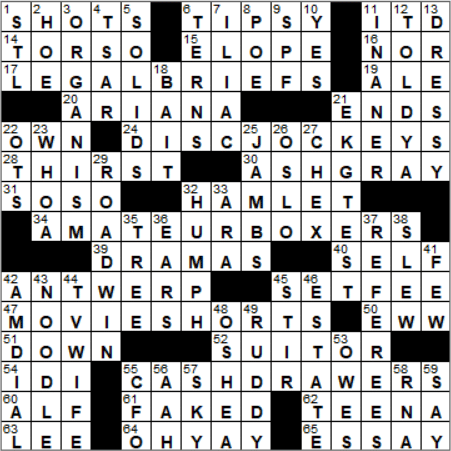 Today’s Theme (according to Bill): Underwear for Pros

Themed answers are common phrases that have been reinterpreted as UNDERWEAR for particular sets of professionals:

20. Singer Grande with the #1 albums “Yours Truly” and “My Everything” : ARIANA

The port city of Antwerp is the second most populous urban area in Belgium after the capital Brussels. To most of the French-speaking population of the country, Antwerp is known as Anvers. The city’s economy is driven by the volume of traffic through the port, as well as trade in diamonds.

5. Opponent of stripes in billiards : SOLIDS

One side (player) in a game of pool uses the “solid” balls, the other the “stripes”.

Terns are a family of seabirds. They are similar to gulls, but more slender and more lightly built. Many species of tern are known for their long-distance migrations, with the Arctic tern migrating so far that it is believed to see more daylight in a year than any other animal.

7. Relating to part of the pelvis : ILIAC

The ilium is the upper portion of the hipbone.

9. Rating on a Coppertone bottle, for short : SPF

Coppertone is a brand of sunscreen that is owned by Bayer. There is a famous advertising campaign featuring the “Coppertone girl”, in which a little dog pulls at the bathing suit of a pig-tailed girl revealing a cheeky tanline. A 1965 TV version of the ad featured 3-year-old Jodie Foster in her first acting role.

In some sports, a tied game or match is decided in overtime, with the winner being the first team or player to score a point or a goal. That game-winning score might be referred to as the “golden goal”.

“The Dick Van Dyke Show” is a sitcom that ran from 1961 to 1966 starring Dick Van Dyke and Mary Tyler Moore as Rob and Laura Petrie. This classic show was created by the great Carl Reiner, who also had a supporting role on screen.

I drank a rum swizzle or two on the island of Bermuda many years ago, and very nice they were too. They are so popular on Bermuda that the swizzle is often called the island’s national drink. The drink also gave the name to the “swizzle stick”, which was introduced in cocktails in 1933.

Milo O’Shea was a great Irish character actor from Dublin who has appeared in everything from “Romeo and Juliet” to “The West Wing”. O’Shea passed away in 2013, in New York City.