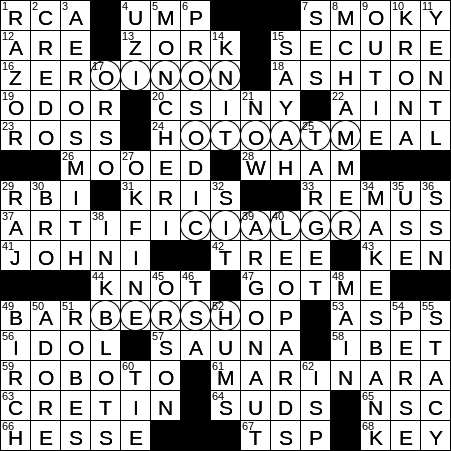 Themed answers each include a string of letters that are circled in the grid. Those letter-strings can be rearranged to spell out an ingredient needed to make a MARINARA sauce:

29. Result of a successful squeeze bunt, for short : RBI

The Uncle Remus stories are adaptations of African American folktales that Joel Chandler Harris collected across the Southern States.

Ken Jennings is a remarkable man, the person who had the longest winning streak on television’s “Jeopardy”. He has also won more game show money than any other person. He was defeated after 75 appearances on the show, after racking up over $2.5 million in the prior episodes.

Barbershop music is played in the a cappella style, meaning that it is unaccompanied vocal music. Barbershop music originated in the African-American communities in the South, as gospel quartets often gathered in neighborhood barber shops to sing together.

A fanzine (also “zine”) is a fan publication with a very limited circulation, dealing with a very specific subject matter. Fanzines are usually desktop published and distributed electronically or as photocopies.

“Mr Roboto” is a song on the 1983 album “Kilroy Was Here” by the Chicago band Styx. The first lines of the song are:

Italians use the term “marinara” not for a sauce, but in the name of a recipe that includes a tomato-based sauce. For example, “spaghetti alla marinara” would be a spaghetti dish, served “mariner’s style”. The tomato sauce that we call “marinara” is called “salsa di pomodoro” in Italy.

“Cretin” is a slang term meaning “idiot”, and is a term that I do not like at all. “Cretin” was a medical term in the 1900s that derived from Alpine French dialect. Congenital hypothyroidism was particularly associated with an area in the French Alps and manifested itself as impaired physical and mental development, a condition known as “cretinism”.

Wiesbaden is the capital city of the federal state of Hesse in southwestern Germany. Wiesbaden is one of the oldest spa towns in Europe, and its name translates literally to “meadow baths”.

Steven Tyler is the lead singer of the rock band Aerosmith, who are based in Boston. Tyler likes to scream a lot on stage and is the known as the “Demon of Screamin’”. Tyler’s daughter is the actress Liv Tyler.

Rapper MC Hammer (aka Hammer and Hammertime) was born Stanley Kirk Burrell, and was very popular in the 80s and 90s. Being around that early, MC Hammer is considered to be one of the forefathers of rap. Nowadays, MC Hammer is a preacher, and uses the initials MC to stand for “Man of Christ”. If you are so inclined, you can learn a little about Hammer and his family life by watching past episodes of the reality TV show “Hammertime”, which aired in 2009.

“Yentl” is a play that opened in New York City in 1975. The move to adapt the play for the big screen was led by Barbra Streisand, and indeed she wrote the first outline of a musical version herself as far back as 1968. The film was eventually made and released in 1983, with Streisand performing the lead role.

The article of clothing known as a cardigan is named after the British Army Major General James Brudenell, the 7th Earl of Cardigan. Apparently, the cardigan’s design is similar to the a knitted wool waistcoat that was worn by officers during the Crimean War in which the Earl of Cardigan played a major role.

The Equal Rights Amendment (ERA) was written by the American suffragist leader, Alice Paul. Although Paul was successful in her campaign to get passage of the 19th Amendment to the US Constitution (guaranteeing voting rights regardless of sex), her 1923 Equal Rights Amendment didn’t make it to the Senate floor until 1972. The amendment was passed by the Senate, and then headed to the state legislatures for the required ratification. 38 states had to approve the legislation for the amendment to be adopted, but only 35 states voted in favor before the deadline. So the amendment is still pending, although about half of the fifty states have adopted the ERA into their state constitutions.

Orson Bean is an actor who is perhaps best known for his appearances on television game shows in the sixties, seventies and eighties. His most famous game show role was panelist on “To Tell the Truth”. Interestingly, Bean (real name Dallas Burrows) is a first cousin, twice removed, of President Calvin Coolidge.

49. Source of bark for canoes : BIRCH

The bark of birch trees (known as “birchbark”) is a useful material that has been used since prehistoric times as a building, crafting and writing material. Birchbark is readily cut, bent and sewn and resembles cardboard, although unlike cardboard, it is also water-resistant. Birchbark was a popular material with Native Americans, used for making canoes, wigwams, scrolls and maps.

The modern instrument we know today as the kazoo was invented by one Alabama Vest of Macon, Georgia in the 1800s. The kazoo first came to the public’s attention at the Georgia State Fair of 1852, when it was known as the “Down-South Submarine” (because of it’s shape, I would imagine).