Constructed by: Carl Worth
Edited by: Will Shortz 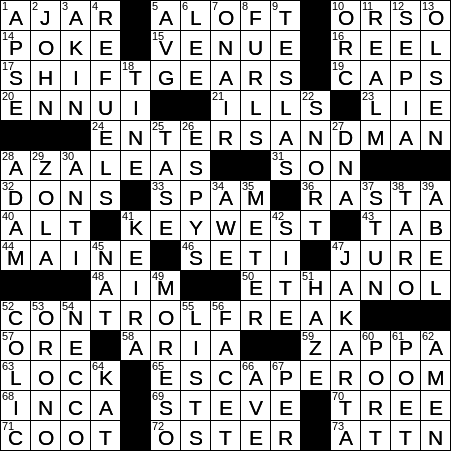 Today’s themed answers are all written in the across-direction, and each comprise two words. The word to the WEST (left) in each themed answer is a KEY found on a computer keyboard:

24. Metallica hit with the lyric “Sleep with one eye open” : ENTER SANDMAN

Metallica is a heavy metal band from Los Angeles that formed in 1981. Not my thing …

Tab was the first diet cola introduced by the Coca-Cola company, in 1963. It was produced as a competitor to the very successful Diet Rite cola that was made by RC Cola. The name “Tab” was used as the beverage was aimed at people who wanted “to keep tabs” on their weight.

The term “pop top” refers to a whole family of designs for opening the top of a soda can. The oldest method is the “pull tab” or “ring pull”, invented in Canada in 1956. The design was long-lived, but it had its problems, so the world heaved a sigh of relief with the invention of the stay-on-tab in 1975. The new design led to fewer injuries and eliminated all those used pull tabs that littered the streets.

“SETI” is the name given to a number of projects that are searching for extraterrestrial life. The acronym stands for “search for extraterrestrial intelligence”. One of the main SETI activities is the monitoring of electromagnetic radiation (such as radio waves) reaching the Earth in the hope of finding a transmission from a civilization in another world.

69. First name of two of the three Apple co-founders : STEVE

The Oster brand of small appliances was introduced in 1924 by John Oster. He started out by making manually-powered hair clippers designed for cutting women’s hair, and followed up with a motorized version in 1928. The clippers kept the company in business until 1946 when Oster diversified, buying a manufacturer of liquefying blenders in 1946. The blender was renamed to “Osterizer” and was a big hit. Oster was bought up by Sunbeam, which has owned the brand since 1960.

Nelle Harper Lee was an author from Monroeville, Alabama. For many years, Lee had only one published novel to her name. That is a “To Kill a Mockingbird”, a contribution to the world of literature was enough to earn her the Presidential Medal of Freedom and a Pulitzer Prize. Harper Lee was a close friend of fellow author Truman Capote who was the inspiration for the character named “Dill” in her novel. Lee was all over the news in 2015 as she had published a second novel, titled “Go Set a Watchman”. The experts seem to be agreeing that “Go Set a Watchman” is actually a first draft of “To Kill a Mockingbird”. Lee passed away less than a year after “Go Set a Watchman” hit the stores.

13. Jimmy of the Daily Planet : OLSEN

Francis Crick and James Watson discovered that DNA had a double-helix, chain-like structure, and published their results in Cambridge in 1953. To this day the discovery is mired in controversy, as some crucial results collected by fellow researcher Rosalind Franklin were used without her permission or even knowledge.

39. Victim of the first fratricide : ABEL

Jakarta is the capital of Indonesia and is located on the northwest coast of the island of Java. The city’s name comes from “Jayakarta” meaning “complete victory”.

Baby colic is a condition in which a baby cries for no apparent reason for extended periods. At least one study has shown that breastfed babies are about half as likely to suffer from colic.

Necco Wafers are the best-known product line of the candy manufacturer called the New England Confectionery Company. The firm’s name is abbreviated to NECCO, an acronym that became synonymous with the wafers.

The English poet John Keats died in Rome in 1821, and is buried there in the Protestant Cemetery. His last wish was that his grave be marked with a tombstone bearing just the words “”Here lies One whose Name was writ in Water”, and no name nor a date. Keats’ friends honored his request to some extent, as the words were included on the stone and no name is given. The full epitaph reads:

This Grave
contains all that was Mortal
of a
Young English Poet
Who
on his Death Bed, in the Bitterness of his Heart
at the Malicious Power of his Enemies
Desired
these Words to be
engraven on his Tomb Stone:
Here lies One
Whose Name was writ in Water.
24 February 1821