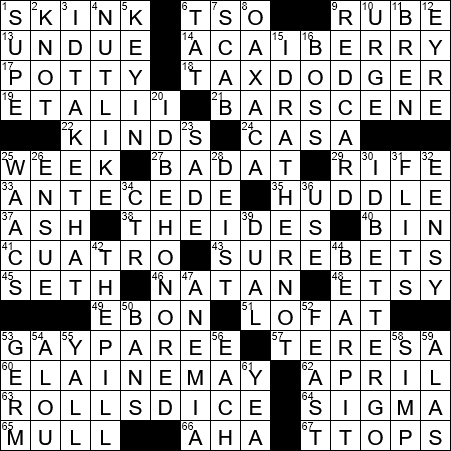 Themed answers each start with “I’D”:

Yahoos were brutish creatures introduced by Irish author Jonathan Swift in “Gulliver’s Travels”. Their savage, slovenly ways gave rise of the use of “yahoo” in English to describe a lout or neanderthal.

“TIME” was the first weekly news magazine in the US. It was founded in 1923 by Briton Hadden and Henry Luce. Hadden and Luce had previously worked together as chairman and managing editor of the “Yale Daily News”.

38. Date that provides a phonetic hint to four other answers in this puzzle : THE IDES

Mother Teresa was born in 1910 in the city that is now called Skopje, the capital of Macedonia. At birth she was given the names Agnes Gonxha Bojaxhiu (“Gonxha” means “little flower” in Albanian). She left home at the age of 18 and joined the Sisters of Loreto, and headed to Loreto Abbey in Rathfarnham in Dublin, Ireland in order to learn English. Her goal was to teach in India, and English was the language used there for instruction by the nuns. After Mother Teresa passed away in 1997 she was beatified by Pope John Paul II, a step on the road to canonization. In order for her to be beatified there had to be documented evidence of a miracle that was performed due to her intercession. The miracle in question was the healing of a tumor in the abdomen of a woman due to the application of a locket containing a picture of Mother Teresa. Documentation of a second miracle is required for her to be declared a saint. The canonization process seems to well underway, with Pope Francis recognizing a second miracle in December 2015.

Elaine May film director, screenwriter and comedian who is best known for the comedy double act she had in the late fifties with Mike Nichols. Nichols and May routines were hilarious sketches or skits, sometimes with substantial amounts of improvisation. The comedy team split up after only four years in 1961, when they were at the pinnacle of their fame. May went into film directing, with mixed success. May wrote and directed “Ishtar” in 1987 starring Warren Beatty and Dustin Hoffman. “Ishtar” is often cited as the epitome of a box office failure. May never directed another film, but continued writing. She wrote the script adaptation for the wonderful 1996 film “The Birdcage”.

Oaxaca (officially “Oaxaca de Juárez”) is the capital city of the Mexican state of Oaxaca, located in the south of the country.

Veracruz is one of Mexico’s 31 states, and is located in the east of the country east coast. The state takes its name from the city of Veracruz, which is a major port city in the state. Veracruz is not the state capital, however, That honor goes to the city of Xalapa.

The Bren gun is a light machine gun that was used mainly by the British armed forces from the 1930s until the 1990s. The Bren is a modified version of gun designed in the city of Brno in Czechoslovakia. The name “Bren” comes from “Brno” and “Enfield”, where the gun was modified and produced.

The Women’s Army Auxiliary Corps (WAAC) was formed in 1942, and the unit was converted to full status the following year to become the Women’s Army Corps (WAC). Famously, General Douglas MacArthur referred to the WACs as his “best soldiers”, saying they worked harder, complained less and were better disciplined than men. The WACs were disbanded in 1978 and the serving members were integrated into the rest of the army.

“Voltaire” was the pen name of French writer and philosopher François-Marie Arouet. He chose the name “Voltaire” as it is an anagram of “Arovet Li”, the Latinized spelling of his family name “Arouet”.

The term “anemia” (or “anaemia” as we write it back in Ireland) comes from a Greek word meaning “lack of blood”. Anemia is a lack of iron in the blood, or a low red blood cell count. Tiredness is a symptom of the condition, and so we use the term “anemic” figuratively to mean “lacking in vitality or substance”.

The germ of a cereal (like wheat and oat) is the reproductive part that germinates and grows into a new plant. A whole grain has three main parts:

Jesus Alou played Major League Baseball, as did his brothers Matty and Felipe, and as does Felipe’s son Moises.

“Simp” is slang for a simple or foolish person. Not nice …