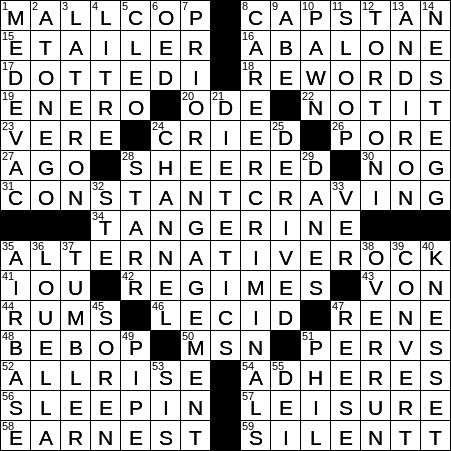 16. Another name for an ear shell : ABALONE

The large edible sea snails that we call abalone are called ormer in the British Isles, and is served as “awabi” at a sushi bar. The abalone shell resembles a human ear, giving rise to the alternative names “ear shell” and “sea ear”.

The holiday in the Christian tradition known as the Epiphany falls on January 6th. In some Spanish-speaking countries, the Epiphany is known as “Día de los Reyes”, and in other as “Día de Reyes” (The Day of Kings).

“Billy Budd, Sailor” is a novella by American author Herman Melville. However, Melville didn’t actually finish “Billy Budd” before he died in 1891.

Quite often, the terms “regime” and “regimen” seem to be used interchangeably. In contemporary usage though, “regime” is applied more generally, and “regimen” more specifically. A “regimen” is a systematic approach that one might apply to something, exercise or diet for example. The term “regime” can also be used in such contexts, but can have additional definitions, such as “government in power”. A form of government cannot be described as a “regimen”.

“Le Cid” is an opera by Jules Massenet that premiered at the Paris Opéra in 1885. The opera is adapted from a play of the same name by Pierre Corneille. Both works are based on the legends surrounding Spanish military leader El Cid.

The jazz term “bebop” probably came from “Arriba! Arriba!”, which were words of encouragement uttered by Latin American bandleaders to their musicians.

There is a silent letter T (tee) at the end of the word “depot”.

Andirons (also “firedogs”) are those horizontal bars on which you rest logs to burn in an open fireplace. They usually come in pairs and can be quite decorative, and are often made out of wrought iron.

The most famous recording of “War” was by Edwin Starr in 1970. It went to number one, at the height of the anti-Vietnam War sentiment in the country, and became the song most associated with Starr. The song has also been recorded by the Temptations and Bruce Springsteen.

29. Dwellers on the North Sea : DANES

47. Dodgers Hall-of-Famer whose #1 has been retired : REESE

Pee Wee Reese was a shortstop who played his professional career with the Brooklyn and LA Dodgers. Reese is remembered not only for his skill on the field, but for his very visible support for teammate Jackie Robinson, who famously struggled to be accepted as the first African American player in the majors. As he was an outstanding marbles player as a child, Reese was given the nickname “pee wee” after the name for a small marble.