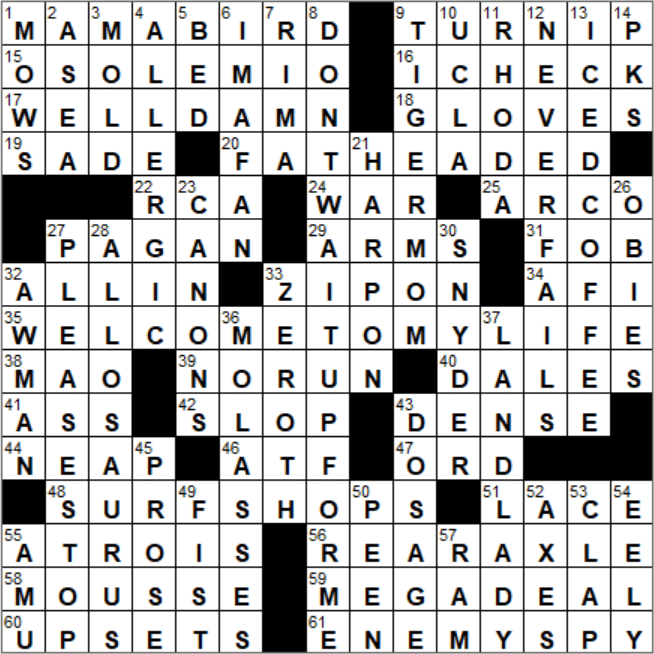 9. A rutabaga is a cross between a cabbage and this : TURNIP

The names of veggies cause me grief sometimes. What’s called a turnip here in the US, we call a swede back in Ireland. An Irishman’s turnip is a rutabaga over here. Thank goodness a potato is a potato, or I’d just give up altogether 🙂

“‘O sole mio” is a famous Italian song from Naples, written in 1898. The song’s lyrics are usually sung in the original Neapolitan, as opposed to Italian. The title translates from Neapolitan into “My Sun” (and not into “O, My Sun” as one might expect). It’s a love song, sung by a young man declaring that there is a sun brighter than that in the sky, the sun that is his lover’s face. Awww …

Samuel Langhorne Clemens was the real name of the author Mark Twain. Twain wasn’t the only pen name used by Clemens. Early in his career he signed some sketches as “Josh”, and signed some humorous letters that he wrote under the name “Thomas Jefferson Snodgrass”. The name of Mark Twain came from the days when Clemens was working on riverboats on the Mississippi. A riverboatman would call out “by the mark twain” when measuring the depth of water. This meant that on the sounding line, according to the “mark” on the line, the depth was two (“twain”) fathoms, and so it was safe for the riverboat to proceed.

29. Some of Lockheed Martin’s business : ARMS

Lockheed Martin is a huge aerospace and defense company headquartered in Bethesda, Maryland. Over 7% of the money paid out by the Pentagon in 2009 went to Lockheed Martin.

O’Hare International is the fourth busiest airport in the world. The original airport was constructed on the site between 1942 and 1943, and was used by the Douglas Aircraft Company for the manufacture of planes during WWII. Before the factory and airport were built, there was a community in the area called Orchard Place, so the airport was called Orchard Place Airport/Douglas Field. This name is the derivation of the airport’s current location identifier: ORD (OR-chard D-ouglas). Orchard Place Airport was renamed to O’Hare International in 1949 in honor of Lieutenant Commander Butch O’Hare who grew up in Chicago. O’Hare was the US Navy’s first flying ace and a Medal of Honor recipient in WWII.

To lace a drink, is to spike it, by adding perhaps some alcohol or other strong substance.

1. Does some diamond cutting? : MOWS

If you like Jell-O, then you want to stop by LeRoy, New York where you can visit the only Jell-O museum in the world. While at the museum, you can walk along the Jell-O Brick Road …

“Rima” is Italian for “rhyme”.

The seventies sitcom “Rhoda” starring Valerie Harper was a spin-off of “The Mary Tyler Moore Show”. The eighth episode of the show was an hour-long special in which Rhoda married her fiance Joe (played by David Groh). At the time of airing it was the second-most watched television episode in history, second only to the 1953 birth of Little Ricky on “I Love Lucy”.

The Obies are the “Off-Broadway Theater Awards”. The Obies are presented annually and the recipients are chosen by “The Village Voice” newspaper.

The Scottish writer Sir Arthur Conan Doyle is most closely associated with his wonderful character Sherlock Holmes. Doyle also wrote a series of science fiction stories featuring the character Professor Challenger. The first book in which Challenger appears is the famous “The Lost World”, a story about prehistoric creatures that are found living in the modern age on an isolated plateau in South America.

Tom Snyder was a news anchor and radio/television personality who worked for NBC and CBS in the seventies and eighties. Snyder was best known for his late night appearances hosting “The Tomorrow Show” and “The Late Late Show”.

When sugarcane is processed to extract sugar, it is crushed and mashed to produce a juice. The juice is boiled to make a sugary concentrate called cane syrup, from which sugar crystals are extracted. A second boiling of the leftover syrup produces second molasses, from which more sugar crystals can be extracted. A third boiling results in what is called blackstrap molasses.

In the hit television show “I Love Lucy”, Lucille Ball and Desi Arnaz play Lucy and Ricky Ricardo. The Ricardos’ best friends are also their landlords, Fred and Ethel Mertz. The Mertz’s are played by William Frawley and Vivian Vance.

The Amu Darya is a major river in Central Asia that empties into the Aral Sea. It is also called the Oxus or Amu River.