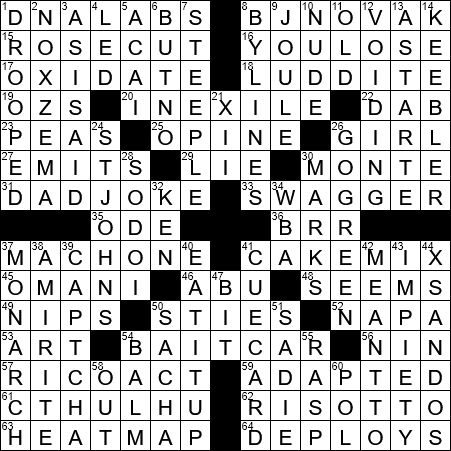 Diamonds that are rose cut are rarely seen these days, with most examples being found in antique jewelry.

Shepherd’s pie, also known as cottage pie, is one of my favorite dishes. It is a meat pie (although my wife makes a vegetarian version), with a crust made from mashed potato.

I tell them all the time, just to annoy the kids …

He clasps the crag with crooked hands;
Close to the sun in lonely lands,
Ringed with the azure world, he stands.
The wrinkled sea beneath him crawls;
He watches from his mountain walls,
And like a thunderbolt he falls.

The National Automotive Parts Association (NAPA) is a retailers’ cooperative that supplies replacement parts for cars and trucks.

Orson Welles is perhaps best-remembered in the world of film for his role in 1941’s “Citizen Kane”. In the world of radio, Welles is known for 1938’s famous broadcast of “The War of the Worlds”, a broadcast that convinced many listeners that the Earth was indeed being invaded by aliens.

54. Vehicle used by the police to catch thieves : BAIT CAR

A bait car is a vehicle that has been fitted out with cameras and tracking devices by the police so that they can catch car thieves.

“Delta of Venus” is a collection of short stories by Anais Nin that was published in 1977, not long after the author’s passing. The stories were originally written on commission for a private collector in the 1940s.

Astarte was an ancient fertility goddess who was worshiped throughout the Near East and the Eastern Mediterranean. “Astarte” is the name that the Greeks gave to her, although Astarte was absorbed into Greek mythology as the goddesses Aphrodite and Artemis.

There is often a Roman numeral 12 (XII) at the top of a clock face.

The carbon footprint of a person, family or organization say, is defined as the total set of greenhouse gases caused by the presence and activities of that entity. More simply it is a measure of the total amount of carbon dioxide and methane emitted by the entity.

That’s a stupid word, am I right?