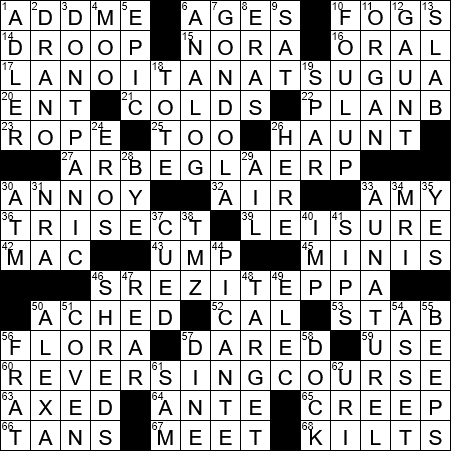 Themed answers are all COURSES, and each is written in REVERSE in the grid:

17. Home of the Masters : AUGUSTA NATIONAL

The Augusta National Golf Club in Augusta, Georgia was founded in 1933 by Bobby Jones and Clifford Roberts. Famously, Augusta hosts the Masters Tournament each year. Augusta is very much a private club, and some of its policies have drawn criticism over the years. Prior to 1959, the club had a bylaw requiring that all caddies be African American. There were no African-American club members admitted until 1990, and no women until 2012.

The common cold is caused by a viral infection of the upper respiratory tract. There are over 200 strains of virus that are known to cause the disease.

27. Something unknowns are introduced in : PRE-ALGEBRA

“Mac” is a casual and generic form of address to a man. The term comes from the Gaelic “mac” that is commonly used in Scottish and Irish names, and which means “son of”.

43. One who might be second-guessed by instant replays : UMP

Back in the 15th century, “an umpire” was referred to as “a noumpere”, which was misheard and hence causing the dropping of the initial letter N. The term “noumpere” came for Old French “nonper” meaning “not even, odd number”. The idea was that the original umpire was a third person called on to arbitrate between two, providing that “odd number” needed to decide the dispute.

The term “pink-slip” can be used as a verb meaning “to terminate an employee”. No one really seems to know for sure where the term originated, but there are lots of stories.

68. What bagpipes are often played in : KILTS

Bagpipes have been played for centuries all across Europe, in parts of Asia and North Africa, and in the Persian Gulf. However, the most famous versions of the instrument today are the Scottish Great Highland bagpipe and the Irish uilleann pipes, my personal favorite (I’m biased). The bag in the Scottish version is inflated by blowing into it, whereas the Irish version uses a bellows under the arm.

Alfred Adler was one of the group of medical professionals that founded the psychoanalytic movement. Today, Adler is less famous than his colleague Sigmund Freud.

To clean out drains we might buy Crystal Drano, which is sodium hydroxide (lye) mixed with sodium nitrate, sodium chloride (table salt) and aluminum. The contents of Drano work in concert to clear the clog. The lye reacts with any fats creating soap which may be enough to break up the clog. Also, the finely-divided aluminum reacts with water creating tremendous heat so that that mixture boils and churns, then any hair or fibers are cut by the sharp edges of the nitrate and chloride crystals. Having said all that, I find that boiling water poured down the drain quite often does the job …

“Au naturel” is a French phrase, simply meaning “in a natural state”. We use the term in the same sense, and also to mean “nude”.

Amazon’s Alexa is a personal assistant application that is most associated with the Amazon Echo smart speaker. Apparently, one reason the name “Alexa” was chosen is because it might remind one of the Library of Alexandria, the “keeper of all knowledge”.

“Coven” is an old Scottish word meaning simply “gathering”. The first known application of the word to witchcraft came during the trial of a Scotswoman in 1662 accused of being a witch. At that time, “coven” came to mean a group of 13 witches.

A banquet is an elaborate feast. “Banquet” is a term that seems to have reversed in meaning over time. Coming into English via French from Old Italian, “banquet” is derived from “banco” meaning “bench”. The original “banco” meal was simply a snack eaten on a bench, rather than at a table. I guess we eat more these days …