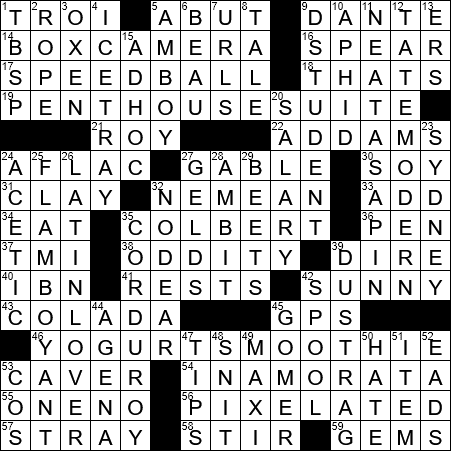 1. Sci-fi character who graduated from Starfleet Academy in 2359 : TROI

Kodak introduced the Brownie box camera in 1900, and hence ushered in the era of low-cost photography and snapshots. Brownies went on sale for the princely sum of one dollar. And yes, I had one …

A speedball is a intravenous mix of cocaine and heroin or morphine. The list of celebrities that have died from speedball use includes John Belushi, Chris Farley, Philip Seymour Hoffman and River Phoenix.

The name “Roy” is of Norman origin, and comes from the Spanish “rey” or French “roi” meaning “king”.

The gable is a the triangular portion of the wall on a building that is defined by the intersection of the two slopes of the roof.

“Piña colada” is a Spanish term which translates into “strained pineapple”. The piña colada cocktail was introduced in the Caribe Hilton San Juan in 1954, and since 1978 it has been the official beverage of Puerto Rico. Yum …

“Inamorata” is an Italian term that we’ve imported into English. It describes a female lover. An “innamorato” is a male lover.

“One no” is short for “one no-trump”, a common bid in the card game of bridge.

I’m not sure that this clue/answer is correct …

The Latin “recipere” means “to take”, and the imperative form “recipe” was written at the top of medical prescriptions as an instruction, i.e. take (the following). This use of “recipe” evolved into the instruction for preparing a dish of food in the mid-1700s.

“Bouquet” comes from the French word for a “bunch” in the sense of bunch of flowers. In French, the term is derived from an older word describing a little wood, or a small grove of trees.

The museum known as “the Tate” is actually made up of four separate galleries in England. The original Tate gallery was founded by Sir Henry Tate as the National Gallery of British Art. It is located on Millbank in London, on the site of the old Millbank Prison, and is now called Tate Britain. There is also the Tate Liverpool in the north of England located in an old warehouse, and the Tate St. Ives in the west country located in an old gas works. My favorite of the Tate galleries is the Tate Modern which lies on the banks of the Thames in London. It’s a beautiful building, a converted power station that you have to see to believe.

20. Sensitive figure, for many : SALARY

23. Most populous city in Oceania : SYDNEY

The part of the Pacific Ocean known as Oceania is roughly equivalent to the tropical islands of the South Pacific. Oceania can be divided into the regions of Polynesia, Melanesia and Micronesia.

“To geld” is to castrate a male animal. “Geld” comes from the Old Norse word “gelda” meaning “castrate”.

The exact etymology of “snit”, meaning “fit of temper”, isn’t really known. The term was first used in print in the play “Kiss the Boys Goodbye” by Clare Booth Luce, which dates back to the 1930s and is set in the American South.

Ralph Waldo Emerson was an essayist and poet who was active in the mid-1800s. Most of the essays that Emerson wrote were composed originally as lectures and then revised for print. He is often referred to as “The Sage of Concord”, as Emerson spent much of his life in Concord, Massachusetts.