Constructed by: Sam Ezersky & Byron Walden
Edited by: Will Shortz 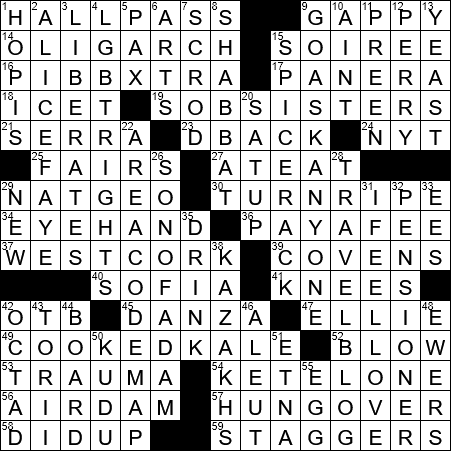 “Soir” is the French word for “evening” and a “soirée” is an “evening party”. The French word “soirée” has an acute accent over the first “e”, but we tend to drop this when using the word in English.

Rapper Ice-T must be sick of having his name come up as an answer in crossword puzzles (I know I am!). Ice-T has been interested in acting for decades and made his film debut in the 1984 movie about breakdancing called “Breakin’”. He has also played Detective Fin Tutuola in the TV show “Law & Order: Special Victims Unit” since the year 2000.

“Coven” is an old Scottish word meaning simply “gathering”. The first known application of the word to witchcraft came during the trial of a Scotswoman in 1662 accused of being a witch. At that time, “coven” came to mean a group of 13 witches.

45. Tony once nominated for an Emmy : DANZA

The actor Tony Danza is noted for his roles in the TV shows “Taxi” and “Who’s the Boss?” Danza is from Brooklyn, New York and his real name is Antonio Iadanza. He was a professional boxer before his acting career took off.

“Tobacco Road” is a 1932 novel penned by Erskine Caldwell. The novel was adapted into an extremely successful stage play that opened in 1933 on Broadway. The play ran for over 3,000 performances, a record in its day. “Tobacco Road” is still the second longest-running non-musical ever to be produced on Broadway (eventually being beaten out by “Life with Father” in the sixties).

Ketel One is a brand of vodka from the Netherlands. The vodka is distilled from wheat in copper pot stills, and “ketel” is Dutch for “pot still”.

Some Dutch people can get a little annoyed if one refers to their country as “Holland”, as the correct name is “the Netherlands”. North and South Holland are two of the country’s twelve provinces. The use of “Holland” instead of “the Netherlands” is analogous to the former Soviet Union being referred to as “Russia” and the United Kingdom being called “England”. That said, sometimes even the Dutch people themselves refer to the country as Holland, especially at a soccer match!

The main cause of hangover symptoms seems to be dehydration. Ethanol causes increased urine production, leaving the body short of water and resulting in headaches, dry mouth and a lack of energy. The symptoms can be alleviated by drinking a lot of water.

The Pueblo Revolt took place in 1680, and was an action taken by the Pueblo Indians against the Spanish who settled what is today New Mexico. The local people had basically welcomed the new settlers in the area and then lived under Spanish rule for just over 80 years. Spanish atrocities eventually ignited a revolt resulting in 400 Spanish deaths and the 2,000 settlers moving out. However, the Spanish returned just 12 years later.

4. Cause associated with the rainbow flag : LGBT RIGHTS

The term “Pax Americana” is sometimes used to describe the relative peace in the western world that came after WWII resulting from the power and influence enjoyed by the US. The concept isn’t a new one, as there was also the Pax Romana in the days of the Roman Empire, and the Pax Britannica brought about under the influence of the British Empire.

Provincetown is located at the very tip of Cape Cod. As a major vacation destination, Provincetown has a summer population of up to 60,000 people, dropping to under 3,000 off season. The land now called Provincetown was the original “Cape Cod” back in the early 1600s. It wasn’t until much later that the Cape Cod name was applied to the entire region.

Shabbat is the day of rest in the Jewish tradition, and is observed weekly from Friday evening through Saturday evening. Shabbat is welcomed a few minutes before Friday’s sunset, according to Jewish law, and bid farewell on Sunday night after the appearance of three stars in the sky.

In Ancient Greece, thyme was burned as incense and used in baths as it was believed to be a source of courage.

28. Collection of posts about a trip : TRAVEL BLOG

Many folks who visit this website regard it as just that, a website. That is true, but more correctly it is referred to as a blog, as I make regular posts (actually daily posts) which then occupy the “front page” of the site. The blog entries are in reverse chronological order, and one can just look back day-by-day, reading older and older posts. “Blog” is a contraction of the term “web log”.

43. Gateway of a Shinto shrine : TORII