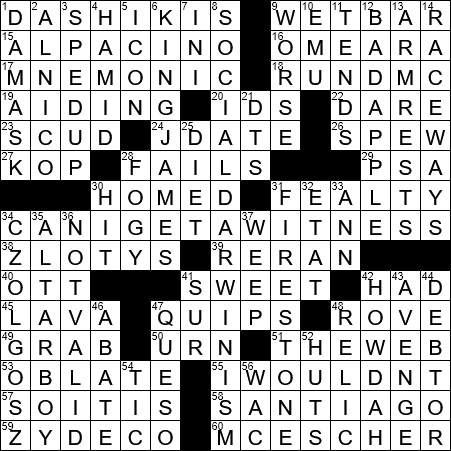 Al Pacino seems to be best known for playing characters on both sides of the law. Pacino’s big break in movies came when he played Michael Corleone in “The Godfather”, a role that grew for him as the series of films progressed. But his Oscar-winning role was that of a blind ex-military officer in “Scent of a Woman”.

22. Option for people who can’t handle the truth? : DARE

“Fealty” is an old word that means “fidelity”. Often, a vassal was required to swear an oath of fealty to his feudal lord.

34. Question that might precede “Hallelujah!” : CAN I GET A WITNESS?

The zloty is the currency of Poland, with the word “zloty” translating into English as “golden”. The zloty has been around since the Middle Ages. The contemporary zloty is divided into 100 groszy.

Baseball player and manager Leo Durocher was noted for being outspoken, and was given the nickname “Leo the Lip”. In 1946, while he was manager of the Brooklyn Dodgers, Durocher expressed the opinion that teams like his successful Dodgers would always do better than teams replete with personable individuals (naming Mel Ott in particular). He used his most memorable phrase to encapsulate the sentiment … “nice guys finish last”.

Bermuda has been a major producer of onions since the 1880s when seed was brought to the island from the Canary Islands off the coast of Africa. Apparently, Ernest Hemingway was a fan of Bermuda onions. While buying some at a market he met a man called Gregorio Fuentes, who Hemingway ended up hiring as the first mate of his boat. Some say that Fuentes was the inspiration for Santiago, the protagonist in “The Old Man and the Sea”. Well, that’s how the story goes …

Hamid Karzai is a former President of Afghanistan, coming to power in 2004 after the Taliban were overthrown. Karzai remained in office for two five-year terms, being replaced in 2014 by Ashraf Ghani.

“Ini Kamoze” is the stage name of Jamaican reggae singer Cecil Campbell. His best known song (though not by me!) is “Here Comes the Hotstepper” released in 1994.

The idea behind “social darwinism” is that the principles of Darwin’s theory of evolution can be applied to societies and nations, and can explain the endurance exhibited by some peoples.

Firestone is a tire company founded by Harvey Firestone in 1900. The Firestone company took off when it was selected by Henry Ford as the supplier of tires for his Model T.

President William McKinley was re-elected in 1900, but failed to serve out the full term. In September of 1901 he went to the Pan-American Exposition in Buffalo, New York where he went to meet the public at the Exposition’s Temple of Music. Leon Czolgosz was waiting for the president, armed with a pistol. Czolgosz shot the President twice before being subdued (and beaten) by the crowd. Doctors operated, and were able to stabilize President McKinley. The medical profession decided to leave one bullet inside the victim, on the face of it a good decision as the President spent almost a week apparently recovering from his ordeal. However, he relapsed, and eight days after being shot he died from gangrene surrounding the wound.

44. One subject to imprisonment, in Dickens’s day : DEBTOR

The Women’s Army Auxiliary Corps (WAAC) was formed in 1942, and the unit was converted to full status the following year to become the Women’s Army Corps (WAC). Famously, General Douglas MacArthur referred to the WACs as his “best soldiers”, saying they worked harder, complained less and were better disciplined than men. The WACs were disbanded in 1978 and the serving members were integrated into the rest of the army.