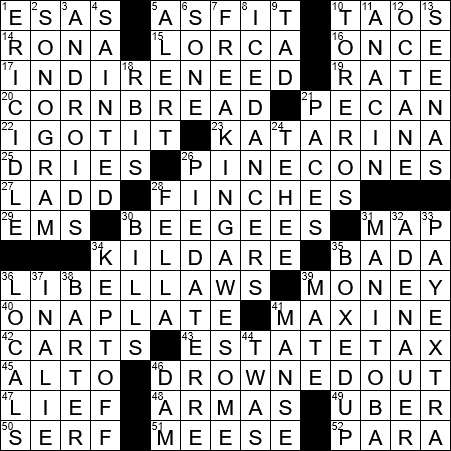 “Esas” is Spanish for “those”.

The Pueblo peoples are Native Americans from the American Southwest who are known for their construction of towns and villages comprising buildings made from adobe and stone. The Pueblo inhabited pit houses dug into cliffs prior to c. 1050 CE. After this date, they started to develop planned village that included apartment-like structure often located on ledges of rock that were easy to defend. The largest of these villages extant today is the magnificent Pueblo Bonito in Chaco Canyon, New Mexico. It is a “must see” when visiting the area …

The pecan is the state nut of which state in the Union? Nope, it’s not Georgia, but rather Alabama …

Katarina Witt is a retired figure skater who represented her homeland of East Germany, winning Olympic golds in 1984 and 1988. After the reunification of Germany, Witt gained access to the files held on her by the East German secret police. Her file contained 3,000 pages of information about her life since she was eight years old.

The last few years of actor Alan Ladd’s life were pretty rough. In 1962 he was found unconscious in a pool of blood with a bullet wound in his chest, an abortive suicide attempt. Two years later he was found dead, apparently having succumbed to an accidental overdose of drugs and sedatives. He was 50 years old.

There are four letters M (ems) in the title “A Midsummer Night’s Dream”.

The Brothers Gibb (hence, the name “The Bee Gees”) were born in England but grew up and started their musical careers in Australia. They moved back to Manchester in the north of England as youths, and there hit the big time.

A site map is a hierarchical list of pages on a web site. A well-designed site map can be useful to site visitors, but is more commonly used by search engines to get a complete and accurate picture of a site so that it is correctly represented in search results.

The word “libel”, meaning a published or written statement likely to harm a person’s reputation, comes into English from the Latin “libellus”, the word for a small book. Back in the 1500s, libel was just a formal written statement, with the more damaging association arising in the 1600s.

W. C. Fields worked hard to develop the on-screen image of a pretty grumpy old man. In his real life he was fairly grumpy too, and fond of protecting his privacy. He was famous for hiding in the shrubs around his house in Los Angeles and firing a BB gun at the legs of tourists who intruded on his property. Also Fields often played the drunk on-screen. In real life, Fields didn’t touch alcohol at all when he was younger, partly because he didn’t want to do anything to impair his skill as a juggler. But later in life he took to heavy drinking, so much so that it affected his health and interfered with his ability to perform.

“Lief” means “willingly, gladly”, and is a term that come from Middle English in the mid-13th century I think that it is a lovely word …

Uber is a ridesharing service that was founded in 2009 and is based in San Francisco. The service is somewhat controversial and has been described as an illegal taxicab operation. Central to Uber’s service is the company’s mobile app, which can use the client’s GPS location to help find the nearest available ride. Uber’s main competitor is Lyft.

Ed Meese was born in Oakland, California just down the road here and spent 24 years in the office of the Treasurer of Alameda County, the county in which I live. After military service, Meese earned himself a law degree at UC Berkeley. Later, as chief of staff for President Reagan, he was instrumental in a famous decision to crack down on student protesters at Berkeley which resulted in one protester dying and a two-week occupation of the city by the California National Guard.

A paralegal (sometimes just “para”) is someone who is trained in legal matters sufficiently to assist a lawyer. A paralegal cannot engage in the practice of law and must be supervised by a qualified lawyer.

1. Who wrote and sang “Always Look on the Bright Side of Life” : ERIC IDLE

A sonogram is an image made created using ultrasound. “Ultrasound” is the name given to sound energy that has frequencies above the audible range.

Joan of Arc (also “Jeanne d’Arc”, her birth name) led the French Army successfully into battle a number of times during the Hundred Years War with England. When she was eventually captured, Joan was tried in Rouen, the seat of the occupying English government in France at that time. There she was burned at the stake having been found guilty of heresy. In fact, after the fire died down, the executioner raked the coals to display the charred body, proving Joan had died, and then burned the corpse again, twice, so that relics could not be collected. The remaining ashes were then cast into the Seine River. Joan of Arc was canonized some 600 years later, in 1920, and is now one of the patron saints of France.

In the world of acoustics, the sone was introduced in 1936 as a unit of perceived loudness.

10. Ones whose work may have sticking points? : TOREROS

“Toreador” is an old Spanish word for a bullfighter, but it’s a term not used any more in Spain nor in Latin America. In English we use the term “toreador”, but in Spanish a bullfighter is a “torero”. A female bullfighter in a “torera”.

11. Product with the old catchphrase “Mother, please, I’d rather do it myself!” : ANACIN

Anacin is a brand of pain reliever that comprises aspirin and caffeine as active ingredients.

A “pied-à-terre” is a secondary living space or temporary accommodation, often somewhere to live in a big city that is some distance away from a primary residence. “Pied-à-terre” is French for “foot on the ground”.

31. One side of the border-straddling International Peace Garden : MANITOBA

Manitoba is the Canadian province that borders the US states of North Dakota and Minnesota. Even though Manitoba has an area of over 250,000 square miles, 60% of its population resides in the province’s capital city of Winnipeg.

Opened in 1932, the International Peace Garden straddles the US-Canada border, lying in both North Dakota and Manitoba. North Dakota goes by the nickname “The Peace Garden State”, a moniker that can be seen on its license plates. Several years ago, building remains from the World Trade Center were placed in the garden. I really have to visit there one day …