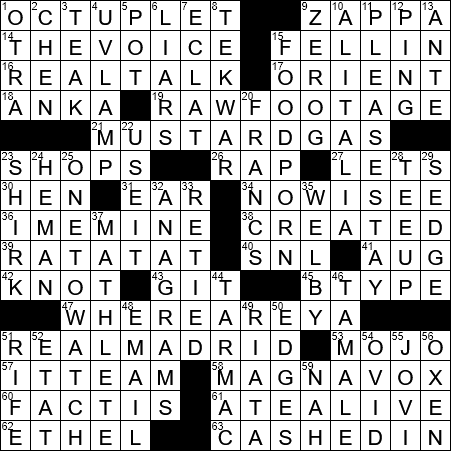 Frank Zappa was an American composer and guitarist, a solo artist as well as the founding member of the rock band Mothers of Invention. You might like to meet his four children: Moon Unit, Dweezil, Ahmet Emuukha Rodan, and Diva Thin Muffin Pigeen.

“The Voice” is yet another reality television show. It is a singing competition in which the judges hear the contestants without seeing them in the first round. The judges then take on chosen contestants as coaches for the remaining rounds. “The Voice” is a highly successful worldwide franchise that originated in the Netherlands as “The Voice of Holland”.

Aesop is remembered today as a fabulist, a writer of fables. Aesop lived in Ancient Greece, probably around the sixth century BC. Supposedly he was born a slave, somehow became a free man, but then met with a sorry end. Aesop was sent to the city of Delphi on a diplomatic mission but instead insulted the Delphians. He was tried on a trumped-up charge of stealing from a temple, sentenced to death and was thrown off a cliff.

31. Something a mantis has only one of, surprisingly : EAR

The term “praying mantis” is often used for species of insects more correctly called simply “mantises”. The familiar term refers to the prayer-like posture adopted by the insect with their fore-limbs folded. Strangely, the praying mantis is the only animal that we know with only one ear. That ear is located deep in the thorax or chest.

36. One of two Harrison compositions on the Beatles’ “Let It Be” : I ME MINE

The verb “to clobber” means “to batter severely”. The term originated in 1941 in the RAF, and at that time was probably echoic of the sound of bombs exploding.

Teak is a hardwood tree in the mint family, commonly found in monsoon forests of Asia. Teak’s tight grain and high oil content make it very suitable for constructing outdoor furniture, where weather resistance is valued. For the same reason, teak is the wood of choice for wooden decks on boats.

The “Tekwar” series of science-fiction novels was co-authored by Ron Goulart and the actor William Shatner, although it’s only Shatner’s name that appears on the book covers. The stories center around the microchip “drug” called “tek” that dominates the Tekwar universe.

The force of gravity (g-force) that we all feel is referred to as “one G”. As gravity is a actually an accelerating force, acceleration is measured relative to that force of gravity. So, if we are sitting in a vehicle that accelerates at 3G, then we are experiencing a force that is three times that which we feel from the gravitational pull of the earth. Zero G is weightlessness that is experienced when in space, outside the influence of the earth’s gravity.

Alitalia is the national airline of Italy. The name “Alitalia” is a melding of the Italian words “ali” (wings) and “Italia” (Italy).

“Marcus Welby, M.D.” is a television series that originally aired from 1969 to 1976. The title role was played by Robert Young.