Constructed by: Talitha Randall
Edited by: Will Shortz 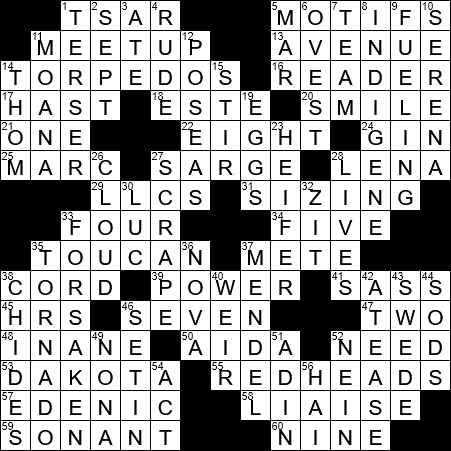 We have three “+” signs in today’s grid, made from black squares. Across-answers on either side of the plus-signs are numbers that add up to NINE. Several down-answers also relate to NINE:

Pennsylvania Avenue in Washington, D.C. is sometimes called “America’s Main Street”, as it runs between the White House and the US Capitol. The exact reason why this important thoroughfare was given the name “Pennsylvania” seems to be unclear. One favored theory is that it was a gesture to the state of Pennsylvania after moving the country’s capital from Philadelphia.

Sonora is the state in Mexico that lies just south of the borders with Arizona and New Mexico. Sonora is the second-largest state in the country, after Chihuahua.

Mother Teresa was born in 1910 in the city that is now called Skopje, the capital of Macedonia. At birth she was given the names Agnes Gonxha Bojaxhiu (“Gonxha” means “little flower” in Albanian). She left home at the age of 18 and joined the Sisters of Loreto, and headed to Loreto Abbey in Rathfarnham in Dublin, Ireland in order to learn English. Her goal was to teach in India, and English was the language used there for instruction by the nuns. After Mother Teresa passed away in 1997 she was beatified by Pope John Paul II, a step on the road to canonization. In order for her to be beatified there had to be documented evidence of a miracle that was performed due to her intercession. The miracle in question was the healing of a tumor in the abdomen of a woman due to the application of a locket containing a picture of Mother Teresa. Documentation of a second miracle is required for her to be declared a saint. The canonization process seems to well underway, with Pope Francis recognizing a second miracle in December 2015.

Gin rummy is a variant of the slower game known as standard rummy. It was introduced in 1909 by one Elwood Baker and his son.

Lena Dunham is a co-star in the HBO series “Girls”, and is also the show’s creator. Dunham garnered a lot of attention for herself during the 2012 US Presidential election cycle as she starred in an ad focused on getting out the youth vote. In the spot she compared voting for the first time with having sex for the first time.

50. Opera set partly on the banks of the Nile : AIDA

“Aida” is a famous opera by Giuseppe Verdi that is actually based on a scenario written by French Egyptologist Auguste Mariette. Mariette also designed the costumes and stages for the opening performance. The opera was first staged in 1871 in an opera house in Cairo. In the storyline, Aida is an Ethiopian princess brought into Egypt as a slave. Radames is an Egyptian commander who falls in love with her, and then of course complications arise!

Date palms can be either male or female. Only the female tree bears fruit.

Sorrento is a small town on the Italian coast that sits on a peninsula overlooking the Bay of Naples. It is an extremely popular tourist destination. The island of Capri lies off the western tip of the Sorrento Peninsula.

I don’t think that anyone is really certain of the etymology of the term “on cloud nine” meaning “elated”, but I do like the following explanation. The 1896 “International Cloud-Atlas” was a long-standing reference used to define cloud shapes that was based on a classification created by amateur meteorologist Luke Howard some decades earlier. The biggest and puffiest of all cloud shapes (and most comfortable-looking to lie on) is cumulonimbus. And you guessed it, of the ten cloud shapes defined in the atlas, cumulonimbus was cloud nine …

“March of the Penguins” is a truly moving, and humorous, nature documentary film by co-writer and director Luc Jacquet. It is a remarkable production, often filmed in temperatures between -58 and -76 degrees Fahrenheit.

“Bereft” is the adjectival form of the verb “to bereave”.

35. What transported Dorothy to Oz : TORNADO

In the 1939 movie “The Wizard of Oz”, the tornado scene ended up costing more money than any other special effect in the whole film. The tornado itself was a 35′ tall muslin sock suspended from a gantry that could move the “twister” during the shoot. The bottom of the sock could also be moved, as it was attached to a rod below the sound-stage. Fuller’s earth was poured into the sock and was blown around by compressed air creating the dust storm effect, and hiding the muslin sock.

37. Gregor who pioneered in genetics : MENDEL

To upbraid is to reproach, find fault with, and is a term of Swedish origin.

The wonderful actress Ingrid Bergman was born in Stockholm and named for Princess Ingrid of Sweden. The three Bergman performances that stand out for me are in 1942’s “Casablanca” opposite Humphrey Bogart, in 1944’s “Gaslight” opposite Charles Boyer and in 1946’s “Notorious” opposite Cary Grant. What a stunningly beautiful woman she was …