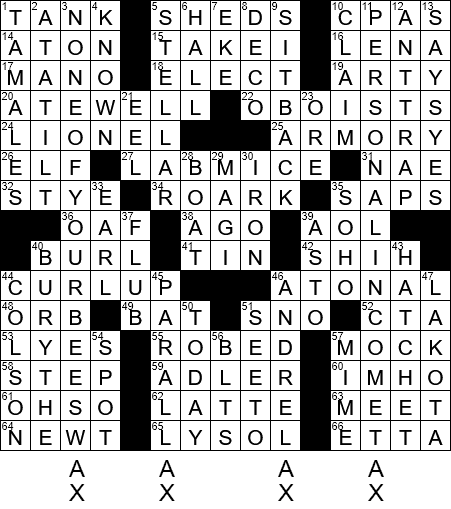 In order to complete today’s puzzle, we have to BURY THE HATCHET, i.e. add four occurrences of AX under the grid to complete four answers:

Our usage of “slew” to mean “large number” has nothing to do with the verb “to slew”. The noun “slew” come into English in the early 1800s from the Irish word “sluagh” meaning “host, crowd, multitude”.

Leonard Nimoy played the logical Mr. Spock in the original “Star Trek” television series. Spock has to be the most popular character on the show, and he kept popping up in “Star Trek” spin offs. Nimoy first worked alongside William Shatner (Captain Kirk) in an episode of “The Man from U.N.C.L.E.” (I loved that show!), with Nimoy playing a bad guy and Shatner playing an U.N.C.L.E. recruit.

The word “magazine” was originally used to denote a place for storing goods, particularly military arms and ammunition, back in the late 1500s. This usage was extended to include packs of ammunition attached to automatic weapons. The first use of “magazine” in the sense of a periodical or journal dates back to 1731, with the publication of “Gentleman’s Magazine”. “Magazine” had come to mean a printed list of military stores, and the idea was that the new periodical was to be a “storehouse” of information.

Inverness is in effect the capital city of the Scottish Highlands. It is the most northerly city in the whole of the United Kingdom. Inverness sits at the mouth of the River Ness, which flows from the famous Loch Ness.

34. Hero architect in “The Fountainhead” : ROARK

“The Fountainhead” by Ayn Rand was first published in 1943, and was her first novel to achieve public success. The story focuses on an idealistic architect, Howard Roark. Roark is uncompromising in his designs, refusing the give the public what it wants, staying doggedly loyal to his own vision.

“Sap” is slang for a fool, someone easily scammed. The term arose in the early 1800s in Britain, when it was short for in “saphead” and “sapskull”.

A “burl” is a small knot in a piece of wood or in cloth. The term is derived from the Old French “bourle” meaning “tuft of wool”.

The Shih Tzu is one of the oldest breeds of dog, a breed that originated in China. Shih Tzus have long hairy coats but they don’t shed.

49. Image in the night sky over Gotham : BAT

Chicago was the second-most populous city in the US for decades, until Los Angeles took up the spot behind New York in 1984. This second place gave rise to Chicago’s nickname “Second City”.

I’ve always thought the real stars of “Will & Grace” were not the title characters, by rather the supporting characters Jack (played by Sean Hayes) and Karen (played by Megan Mullally).

The disinfectant called Lysol takes its name from the words “lysosome” and “solvent”. Lysosomes are structures found within cells that have the job of breaking up waste material and cellular debris.

A blog reader very kindly sent me an excellent definition some years ago for stellar parallax, which I’d like to quote:

A dragon roll is a sushi dish made from eel, cucumber, seaweed, rice and avocado. I am sure it’s delicious … without the eel!

35. London area next to Mayfair : SOHO

The area of London called Soho had a very poor reputation for most of the 20th century as it was home to the city’s red light district. Soho has been transformed though, and has been a very fashionable neighborhood since the 1980s.

The ritzy area of Mayfair is in the City of Westminster in Central London. The area takes its name from a two-week long May Fair that took place in the area back in the 1600s. Paradoxically, as the area became more wealthy, the elite residents had the fair moved, as they deemed it lowered the tone of the neighborhood. As an aside, in the UK version of the board game Monopoly, the streets used are all in London. Mayfair the most expensive property to purchase, and is equivalent to Boardwalk in the US version.

44. Chuck who was part of the Watergate Seven : COLSON

The Watergate Seven were the seven individuals close to President Richard Nixon who were indicted for their roles in the Watergate Scandal. The seven were: