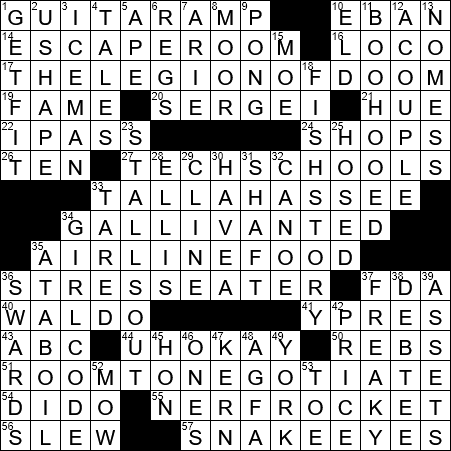 1. Piece of equipment at a rock concert : GUITAR AMP

Sergei Rachmaninoff was a Russian pianist and composer who was active in the late Romantic Era. Rachmaninoff emigrated from Russia in 1917, having been driven away by the Russian Revolution. He eventually settled in the US, where he toured as a pianist for many years. Rachmaninoff’s most famous works are probably his “Piano Concerto No. 1” and his “Rhapsody on a Theme of Paganini”.

34. Went from place to place : GALLIVANTED

“Gallivant” is such a lovely word, and is probably a derivative of “gallant”. To gallivant is to gad about, to flirt, wander in search of pleasure or amusement. My mother was always accusing me of gallivanting when I was a youth …

The reference is to the series of children’s illustrated books called “Where’s Waldo?” that were originally titled “Where’s Wally?” in Britain, where the books originated. The book contains page after page of illustrations with crowds of people surrounding famous landmarks from around the world. The challenge is to find Waldo/Wally, who is hidden in the crowd.

Ypres is a Belgian city located close to the French border. In WWI, Ypres was the scene of three devastating battles that resulted in almost a million casualties, including many who suffered in gas attacks.

Our usage of “slew” to mean “large number” has nothing to do with the verb “to slew”. The noun “slew” come into English in the early 1800s from the Irish word “sluagh” meaning “host, crowd, multitude”.

“Snake eyes” is the slang term for a roll of two dice in which one pip turns up on each die.

28. Merchant Samuel who lent his name to a historic island : ELLIS

“Shafted” isn’t a nice term at all. Someone who has been shafted has been given a raw deal. The term arose in the fifties, playing on the vulgar slang usage of shaft to represent the male organ (a usage that has been around since the early 1700s). The use of the verb “shaft” is a reference to sodomy. As I said, not nice …

32. Something ported at a portage : CANOE

Portage is the carrying of a boat or its cargo over land, perhaps to circumvent an obstacle.

33. Like many a purchase weighed at a deli : TARED

“Sward” is version of the word “swarth”, and describes a grassy piece of land.

Agfa was founded in Germany in 1867 as a company focused on the manufacture of dyes. The full name of the enterprise was Aktiengesellschaft für Anilinfabrikation, shortened to Agfa, and translating as “Corporation for Aniline (a dye) Production”. Agfa merged with the Belgian company Gevaert in 1894, getting them into the photographic business. Agfa 35mm film hasn’t been produced for a few years now, but there is still inventory out there and purists are buying it when they can.

Sarah Ferguson married Prince Andrew of the British Royal Family in 1986. On the occasion of the wedding, Andrew and Sarah were made Duke and Duchess of York. “Fergie” was in the news a few years ago when she was the target of a sting operation by a British tabloid newspaper. She was caught asking for 500,000 British pounds in order to help facilitate access to her ex-husband, Prince Andrew, and actually accepted 40,000 pounds in an envelope. After being exposed, Ferguson made the excuse that she had been drinking prior to soliciting the cash.