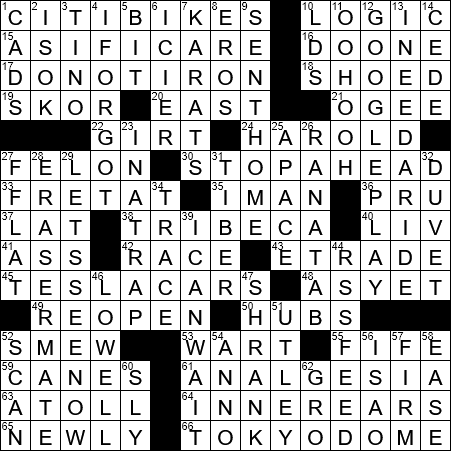 1. Wheels for rent in the Big Apple : CITI BIKES

Skor is a candy bar produced by Hershey’s. “Skor” is Swedish for “shoes”, and the candy bar’s wrapping features a crown that is identical to that found in the Swedish national emblem. What shoes have to do with candy, I don’t know …

Aviator Douglas Corrigan earned the nickname “Wrong Way” after a non-stop flight in 1938 from Brooklyn, New York to County Dublin, Ireland. Corrigan’s flight plan called for a landing in Long Beach, California. He claimed that the unauthorized flight was due to a navigational error, even though he had already been denied permission to make the very same non-stop transatlantic journey.

An ogee is a type of S-curve. Specifically it is a figure consisting of two arcs that curve in opposite directions (like an S) but both ends of the curve end up parallel to each other (which is not necessarily true for an S).

“Gird” is the past participle of “to gird”.

24. One of the two film stoners who “go to White Castle” : HAROLD

“Harold & Kumar” is a trilogy of comedy films about two potheads played by John Cho (Harold) and Kal Penn (Kumar). Not my cup of tea …

Iman Mohamed Abdulmajid is a supermodel from Somalia who goes simply by the name “Iman” these days. “Iman” is an Arabic word for “faith”. Iman is smart cookie. Imam has a degree in Political Science and is fluent in five languages: Somali, Arabic, Italian, French and English. Iman was married to English rock star David Bowie from 1992 until his death in 2016.

TriBeCa is a clever little acronym that expands into “TRI-angle BE-low CA-nal Street”. The name was developed by local residents who basically copied the naming technique used by residents of the neighboring area of SoHo, which is short for “SO-uth of HO-uston Street”.

45. They get charged for trips : TESLA CARS

The smew is a beautiful-looking species of duck found right across northern Europe and Asia. The smew requires trees to complete its breeding cycle as it nests in tree holes, such as old woodpecker nests.

61. One effect of marijuana : ANALGESIA

Our word “cad”, meaning “a person lacking in finer feelings”, is a shortening of the word “cadet”. “Cad” was first used for a servant, and then students at British universities used “cad” as a term for a boy from the local town. “Cad” took on its current meaning in the 1830s.

When we run a “tab” at a bar say, we are running a “tabulation”, a listing of what we owe. Such a use of “tab” is American slang that originated in the 1880s.

31. It flows near the Sistine Chapel : TIBER

The Tiber is the principal river in Italy in that it runs through the capital of Rome. It is also the third longest river in the country.

32. Replacement for a top sheet and blanket : DUVET

A duvet is a large flat bag that is filled with down, feathers or a synthetic substitute that is used as a top cover for a bed. Although a duvet is similar to what is called a “comforter” in the US, there is a difference. A duvet is often has an easily removed cover that is usually laundered at the same time as the bottom sheet and pillowcases. We use them a lot in Europe, and generally without a top sheet due to the ease of laundering.

Scotts Miracle-Gro Company was founded in 1868 by one Orlando Scott, initially selling seed to the agricultural industry. In the early 1900s, Scotts started to sell to homeowners, mainly supplying lawn seed. The company merged with the gardening company Miracle-Gro in 1955.