Constructed by: Michael Shteyman
Edited by: Will Shortz 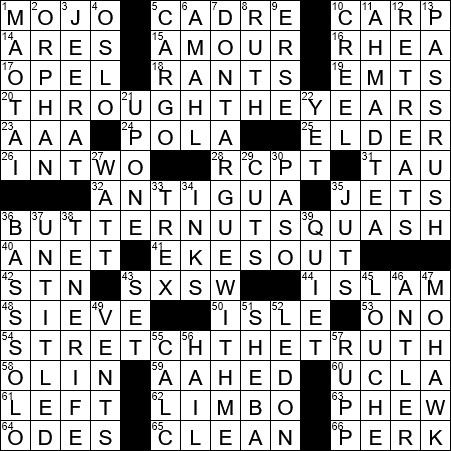 Unusually, we have a themed puzzle on a Saturday. The word TRUTH appears in the longest answers, but the letters are STRETCHED throughout each answer:

The word “carp” used to mean simply “talk” back in the 13th century, with its roots in the Old Norwegian “karpa” meaning “to brag”. A century later the Latin word “carpere” meaning “to slander” influenced the use of “carp” so that it came to mean “find fault with”.

A cavil is a trivial objection, a nit.

14. One of the Twelve Olympians : ARES

19. They may respond for the unresponsive, for short : EMTS

AAA tow trucks do a lot of towing.

24. Actress Negri of the silents : POLA

Pola Negri was a Polish actress, and the first star to be invited from Europe to develop a career in Hollywood. Most of her success came in the silent era, but she was able to make the transition to the talkies. Her off-screen life attracted the attention of the gossip columnists who rejoiced in her affairs with the likes of Charlie Chaplin and Rudolph Valentino.

Tau is the 19th letter of the Greek alphabet, the letter which gave rise to our Roman “T”. Both the letters tau (T) and chi (X) have long been symbolically associated with the cross.

32. Island on which Mount Obama is the highest point : ANTIGUA

Mount Obama is the highest point on the island of Antigua in the West Indies. Formerly known as Boggy Peak, the mountain was renamed for Barack Obama on August 4th, 2009, the US president’s 44th birthday.

South by Southwest, also known as SXSW, is an annual festival that has been taking place in Austin, Texas since 1987. SXSW is a melded event, combining a music festival, a film festival and an interactive festival.

John Lennon and Yoko Ono had a very public honeymoon in a hotels in Amsterdam and then Montreal, when they staged their famous “bed-in” for peace. In answering questions from reporters Lennon found himself often repeating the words “give peace a chance”. While still in bed, he composed his famous song “Give Peace a Chance” and even made the original recording of the song in the Montreal hotel room, with reporters present, and with a whole bunch of friends. The song was released later in 1969 and became a smash hit. Writing credit was initially given to Lennon-McCartney, as was the agreement between John Lennon and Paul McCartney. Later versions of the song were credited just to Lennon, even though Lennon stated that Yoko Ono actually wrote the song with him.

Olin College of Engineering is a private school in Needham, Massachusetts. The college was established in 1997 with funds provided by the F. W. Olin Foundation. Franklin W. Olin was the founder of the chemical and manufacturing company known as the Olin Corporation.

In the Roman Catholic tradition, “Limbo” is a place where souls can remain who cannot enter heaven. For example, infants who have not been baptized are said to reside in Limbo. Limbo is said to be located on the border of Hell. The name was chosen during the Middle Ages from the Latin “limbo” meaning “ornamental border to a fringe”. We use the phrase “in limbo” in contemporary English to mean “in a state of uncertainty”.

64. Dryden’s “Alexander’s Feast” and others : ODES

Maotai is a Chinese liquor that is distilled from fermented sorghum. It is named for the the town of Maotai in Guizhou Province, where there is a long history of distilling alcoholic spirits in volume.

Tom Sawyer is a favorite character created by Mark Twain. He turns up in four of Twain’s books:

Cargo is freight carried by some vehicle. The term comes into English via Spanish, ultimately deriving from the Latin “carricare” meaning “to load on a cart”.

The composer Gian Carlo Menotti’s “Amahl and the Night Visitors” has a special place in the repertoire, in that it is the first opera specifically composed for American television. “Amahl and the Night Visitors” was commissioned by NBC and had its debut at the NBC studios in Rockefeller Center on Christmas Eve, 1951. In today’s world of commercially-driven television, I can’t imagine a network commissioning a classical work …

8. Compassion for the misery of others : RUTH

“Ruth” is a term meaning compassion or sorrow, pity for another. The term with the opposite meaning would be “ruthless”.

12. Camp David and others : RETREATS

Camp David is the very lovely country retreat used by the US President and family. Technically, Camp David belongs to the US Navy and is known as Naval Support Facility Thurmont. The installation was originally built between 1935 and 1938 as a retreat for government agents and their families. President Franklin D. Roosevelt converted it to a presidential retreat in 1942, naming it Shangri-La. When President Eisenhower was in office he renamed Shangri-La to Camp David in honor of his father and grandson, both of whom were called David.

James Watt was a Scottish inventor. He figured prominently in the Industrial Revolution in Britain, largely due to the improvements he made to the fledgling steam engine. The SI unit of power is called the watt, named in his honor.

Paso Robles is a lovely little city in San Luis Obispo County, California. Paso Robles is home to many, many wineries. The name Paso Robles translates from Spanish as “The Pass of the Oaks”.

38. Largest of the Canaries : TENERIFE

Tenerife is the largest of the seven Canary Islands located off the coast of Morocco in North Africa. Part of Spain, Tenerife is the nation’s most populous island, home to almost 900,000 people. It also receives about five million visitors annually, making it one of the most important tourist destinations in the world.

The Canary Islands are located off the northwest coast of Africa. The islands aren’t named for the canary bird and in fact the bird is named for the islands. The name of the Canary Islands comes from the Latin “Canariae Insulae” which translates as “Island of the Dogs”. This was the original name for the third largest island, now called Gran Canaria. In the days of Ancient Rome the island was noted as a home to a large number of very large dogs.

Something described as louche is shady and disreputable. “Louche” is a French term meaning “squinting”. I guess the idea is that someone disreputable might squint, avoid direct eye contact.

“The Song of Hiawatha” is an epic poem by Henry Wadsworth Longfellow that he penned in 1855. Longfellow based the poem on legends told to him by Native Americans. The main characters in the piece are Hiawatha and his lover Minnehaha.

Sheba is referenced in the Bible several times. The “Queen of Sheba” is mentioned as someone who traveled to Jerusalem to behold the fame of King Solomon. No one knows for sure where the kingdom of Sheba was located, although there is evidence that it was actually the ancient Semitic civilization of Saba. The Sabeans lived in what today is Yemen, on the Arabian Peninsula.

The Rupp Arena in Lexington, Kentucky is home to the University of Kentucky’s men’s basketball team. The arena is is named for former Kentucky coach Adolph Rupp, and is the country’s largest sports indoor area with a capacity of 24,000 people.