Constructed by: Jerry Miccolis & Jeff Chen
Edited by: Will Shortz 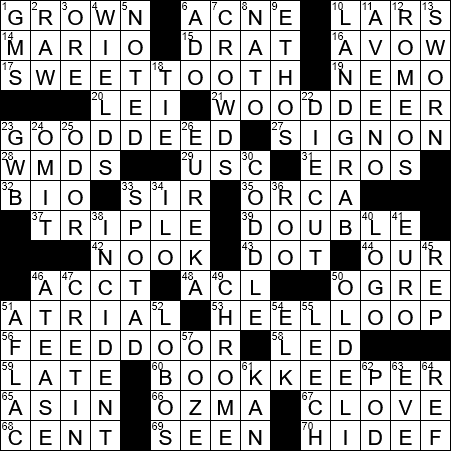 Each of today’s themed answers includes a triple occurrence of doubled letters:

Ryan Gosling is a Canadian actor who really seems to be riding high right now. He is one of a string of entertainers to graduate from the Mickey Mouse Club on the Disney Channel.

The Hawaiian island of Niihau lies about 17 miles southwest of Kauai, with a population of just over 100 people. Niihau is privately owned and so only a few tourists are welcome, and only in the past few decades. The lack of access led to the island earning the nickname “the Forbidden Isle”.

37. With 39-Across, impressive basketball feat … or a feature shared by the answers to the six starred clues : TRIPLE
39. See 37-Across : -DOUBLE

In the world of basketball, a “double” is the accumulation of double digits in either points, rebounds, assists, steals or blocked shots. A “double-double” is getting double digits in two of these five categories. A player can also earn a triple-double, quadruple-double or quintuple-double.

The Barnes & Noble electronic-book reader is called the Nook. The Nook accounts for 10-15% of electronic book readers in the world.

48. Common place for a sports injury, for short : ACL

In the world of retail, “Black Friday” is the day after Thanksgiving in the US. Black Friday is when many stores start the holiday shopping season, and so offer deep discounts to get ahead of the competition.

Aveeno is a manufacturer of skincare and haircare products that was founded in 1945. The name Aveeno comes from the Latin name for the common oat: “Avena sativa”.

New York City’s George Washington Bridge (GWB) spans the Hudson River and links the Washington Heights neighborhood of Manhattan with Fort Lee in New Jersey. When the bridge was opened in 1931 it had one deck, allowing six lanes of traffic to traverse the river. The bridge’s designer allowed for the construction of a second deck under the first, and this was added in 1946. Some locals refer to the second deck as “Martha”, a reference to the president’s wife.

The verb “to coddle”, meaning “to treat tenderly”, was actually coined in 1815 by Jane Austen in her novel “Emma”. At least, that is the first written record we have of the verb’s usage. John Knightley (younger brother of George Knightley) addresses his wife Isabella (elder sister of Emma Woodhouse) with the following words:

The “eurozone” or “euro area” is a monetary and economic union within the European Union that uses the euro as a shared legal tender and sole currency.

45. What people know about you, informally : REP

“Cretin” is a slang term meaning “idiot”, and is a term that I do not like at all. “Cretin” was a medical term in the 1900s that derived from Alpine French dialect. Congenital hypothyroidism was particularly associated with an area in the French Alps and manifested itself as impaired physical and mental development, a condition known as “cretinism”.

Google’s Chrome is now the most popular web browser used in the US, with Mozilla Firefox in second place and Internet Explorer in third. I find Chrome to be much, much more user-friendly than Internet Explorer, and more featured than Firefox. Chrome also works more seamlessly with other Google products and with Android phones.

Yale University in New Haven, Connecticut was founded in 1701, making it the third-oldest university in the US. Originally called the Collegiate School, it was renamed to Yale University in honor of retired merchant from London called Elihu Yale, who made generous contributions to the institution. Yale University’s nickname is “Old Eli”, in a nod to the benefactor.

We are most familiar with medicinal leeches, which feed on the blood of mainly vertebrate animals. However, most leeches are predatory and swallow other invertebrates for food.

Manhattan, Kansas is the fourth largest city in the state and is known as a college town, home to Kansas State University. The original settlement that grew to be Manhattan was known as Boston back in the mid-1800s when settlers from the Cincinnati-Manhattan Company of Ohio landed (actually, they ran aground!) in the area. The settlers agreed to stay in Boston provided the settlement was renamed to Manhattan, a condition that was readily agreed to. In 1977 Manhattan was officially given the nickname of “The Little Apple”, for obvious reasons.