Constructed by: Peter Sagal & Mike Selinker
Edited by: Will Shortz 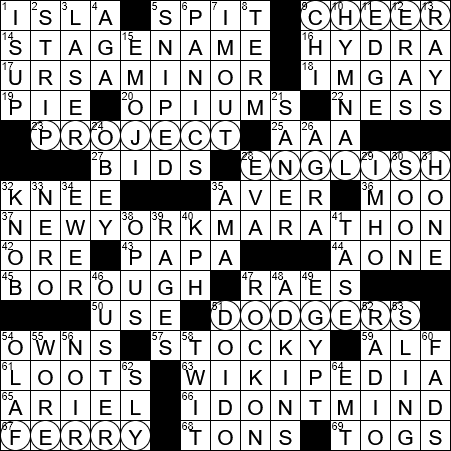 To mark the 75th anniversary of the New York Times crossword, which debuted in 1942, we are publishing a series of puzzles co-created by famous people who solve the Times crossword, working together with regular Times puzzle contributors.

This collaboration is by Peter Sagal, the host of NPR’s “Wait Wait … Don’t Tell Me!,” working together with Mike Selinker, a game and puzzle designer in Renton, Wash. Their crossword is about something Peter is doing – and Mike says he’s “definitely not capable of doing” – this very weekend.

Today’s grid brings us through the route of the NEW YORK CITY MARATHON. The circled answers need to be preceded by boroughs of New York City through which the race passes, in order:

Not so much here in America, but over in the British Isles “blowing a raspberry” is a way of insulting someone (I think that it’s usually called “a Bronx cheer” in the US). The verb “to razz” comes from a shortened form of “raspberry”.

Freddie Mercury was a British singer-songwriter who was lead singer for the rock group Queen. Mercury wrote many of Queen’s hits, including “Bohemian Rhapsody”, “Somebody to Love”, “Don’t Stop Me Now” and “We Are the Champions”. Mercury’s real name was Farrokh Bulsara, and he was born to Parsi parents in Zanzibar (now part of Tanzania) in East Africa. He grew up mainly in India, and arrived in England at the age of 17 when his family had flee from the Zanzibar Revolution.

27. Trump is often involved in these : BIDS

That would perhaps be the game of bridge.

Arthroscopy is surgery that is minimally invasive and is performed on a joint, often the knee, hip or shoulder.

37. Event held on the first Sunday in November, and whose path is recreated in this puzzle : NEW YORK MARATHON

The annual New York City Marathon has more competitors than any other marathon run in the world, with over 50,000 racers completing the course in 2013. The race has been held every year since 1970, except for 2012 when it was canceled due to Hurricane Sandy.

Papa John’s is the third largest takeout and delivery pizza chain in the US, with Pizza Hut and Domino’s taking the top spots.

44. Square for a white rook, in chess notation : A-ONE

45. What each step in this puzzle lacks, in proper order : BOROUGH

47. Actress Issa and others : RAES

The Los Angeles Dodgers baseball team were known as the Brooklyn Dodgers before the franchise moved to California. Before being called as the Dodgers, the team was known in Brooklyn as the Robins, the Superbas, the Trolley Dodgers, the Bridegrooms/Grooms, the Grays and the Atlantics.

“ALF” is a sitcom that aired in the late eighties. ALF is a hand-puppet, supposedly an alien from the planet Melmac that crash-landed in a suburban neighborhood. “ALF” stands for “alien life form”.

63. Many teachers disallow it in footnotes : WIKIPEDIA

Wikipedia is an online encyclopedia, and the most-used reference site on the Internet. It was launched by Jimmy Wales and Larry Sanger in 2001. I, for one, am very grateful …

Ariel is a spirit, and a character who appears in William Shakespeare’s “The Tempest” and who becomes a servant of the magician Prospero. Ariel was actually viewed as a male character when the play was first staged, and the text of the play supports this assumption. Many believe that the part was originally played by a boy actor, and over time the tendency has been to use female actors, but not exclusively.

The verb “tog up”, meaning to dress up, comes from the Latin “toga”, the garment worn in Ancient Rome. “Tog” can be also be used as an informal word for a coat or a cloak. Back in Ireland, togs are what we call swimming shorts.

26. Where Mumtaz Mahal is entombed : AGRA

47. Comment with the pinkie and forefinger extended upward : ROCK ON!

Trace Adkins is a country singer who has also appeared in a quite a few movies and television shows. Adkins was the winner on the reality show “The Celebrity Apprentice” in 2013, after having coming in second place to Piers Morgan in 2008.

Zagazig is a city in the Nile delta of Egypt. It is home to Zagazig University, on of the largest universities in the country.

Count Olaf is the main antagonist in “A Series of Unfortunate Events”, the collection of children’s novels penned by Lemony Snicket (the pen name of Daniel Handler).