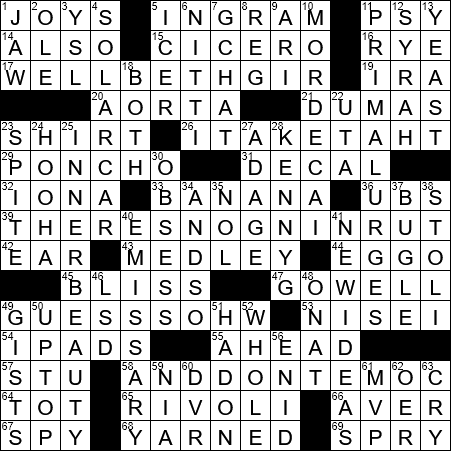 Each of today’s themed answers is a common phrase that ends in the word “BACK”. However, the “back” is implied by writing the previous word backwards:

James Ingram is a soul vocalist and an accomplished self-taught musician known for playing piano, guitar, drums and keyboard.

Luther Ingram was an R&B singer whose biggest hit by far was 1972’s “(If Loving You Is Wrong) I Don’t Want to Be Right”.

15. Orator who declared “Laws are silent in times of war” : CICERO

16. Drink mentioned in the chorus of “American Pie” : RYE

“The Black Tulip” is an 1850 historical novel by the French author Alexandre Dumas, père. Central to the plot is competition in the Netherlands to grow a black tulip, and win a prize of 100,000 Dutch guilders.

A decal is a decorative sticker, with the name a shortening of “decalcomania”. The latter term is derived from the French “décalquer”, the practice of tracing a pattern from paper onto glass or perhaps porcelain.

The Hebrides is a group of islands just off the west coast of Scotland. The Hebrides are divided into two main groups: the Inner and Outer Hebrides.

“UBS” was adopted as the official name of what was intended to be the United Bank of Switzerland when it was formed by a merger in 1998.

Competitive medley swimming can be either individual medley (one swimmer) or medley relay (four swimmers). The four different swimming styles used are:

There are some very specific terms used to describe the children born to Japanese immigrants in their new country. The immigrants themselves are known as “Issei”. “Nisei” are second generation Japanese, “Sansei” the third generation (grandchildren of the immigrant), and “Yonsei” are fourth generation.

The iPad Pro tablet computer, released in November 2015, features a larger screen than all prior iPad models.

The iPad mini is line of smaller iPads that was introduced by Apple in 2012. The iPad mini has a screen size of 7.9 inches, whereas the regular iPad’s screen is 9.7 inches.

The Battle of Rivoli was a 1797 victory for the French, led by Napoleon Bonaparte, over the Austrians. The battle took place at Rivoli Veronese, a commune in the north of Italy. The famous Rue de Rivoli that passes alongside the Louvre Palace in Paris is named for the battle.

“Gchat” is a common name for the Google Talk instant messaging service. Google Talk offers both text and voice communication as well as a plugin that allows video chat. All of this works seamlessly with Gmail, my personal favorite email client. That said, much of this functionality seems to have been replaced with the Google Hangouts service, and more recently Google Duo.

Ari Shapiro was the very able White House correspondent for National Public Radio (NPR) for several years. He became a co-host of network’s drive-time program “All Things Considered” in 2015.

10. He adopted Esther in the Book of Esther : MORDECAI

Esther was a Jewish queen, wife of the Persian king Ahasuerus, and the heroine of the Book of Esther in the Bible. By the way, Esther is the only book in the Bible that doesn’t mention the word “God”.

Lon Nol was a soldier and politician in Cambodia who later served twice as the country’s president. When the Khmer Rouge took over Cambodia in 1975, Nol escaped the country to Indonesia. He eventually found a home in Fullerton, California, where he died in 1985.

Stolichnaya is a brand of Russian vodka made from wheat and rye grain. Well, “Stoli” originated in Russia but now it’s made in Latvia, which is of course a completely different country, so you won’t see the word “Russian” on the label.

I must admit, if I ever do order a vodka drink by name, I will order the Absolut brand. I must also admit that I do so from the perspective of an amateur photographer. I’ve been swayed by the Absolut marketing campaign that features such outstanding photographic images. I’m sure you’ve come across examples …

An emissary is an ambassador, an agent sent on a mission, usually from one government to another. The term derives from the Latin “emissarius” meaning “that is sent out”.