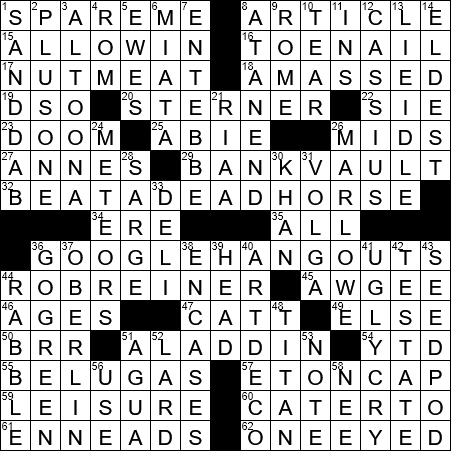 8. Part of the Constitution : ARTICLE

“Sie” is a German word meaning “you”.

Auntie Anne’s is a chain of pretzel bakeries that was founded in 1988. The chain started out as a simple stand in a farmer’s market in Downingtown, Pennsylvania. There are now almost 900 outlets in about a dozen countries.

44. Filmmaker whose directorial debut was “This Is Spinal Tap” : ROB REINER

The beluga whale is also known as the white whale, and is a mammal that inhabits Arctic and sub-Arctic seas. The name “beluga” comes from the Russian “belukha”, which in turn derives from “belyy” meaning “white”.

61. The Muses and others : ENNEADS

The Ennead is a group of nine gods in Egyptian mythology. The Ennead were all in the same family, all descendents of the god Atum.

62. Like many of the Minions in “Despicable Me” : ONE-EYED

Altoona is in central Pennsylvania, and is home to the Ivyside Park Campus of Pennsylvania State University. Altoona is also home to Lakemont Park and Leap-The-Dips, the world’s oldest operating wooden roller coaster.

Kampala is the capital city of Uganda. The airport that serves Kampala is in the town of Entebbe. Entebbe airport is well known for the daring hostage-rescue carried out by Israeli Defense Forces in 1976 following a hijacking.

12. Senator who was one of the assassins of Julius Caesar : CASSIUS

In discussing Roman history, when we refer to “Cassius”, we are usually talking about Gaius Cassius Longinus. Cassius was a senator, and one of the leaders in the successful plot to kill Julius Caesar. After the assassination, Cassius was defeated in the Battle of Philippi by Marc Antony. The vanquished senator then killed himself, using the very same dagger that he used against Julius Caesar.

24. Things seen in a shower : METEORS

Oberlin, Ohio is a city southwest of Cleveland. The city is home to Oberlin College, the biggest employer in town. Oberlin was named after Jean-Frédéric Oberlin, a pastor from Alsace. Oberlin was the first college in the country to admit African American students, and the second to admit females (after Cumberland College in Princeton, Kentucky).

Someone who dies “intestate” does so without having made a will. Someone with a will is “testate”.

Tequila is a city in Mexico that is located about 40 miles northwest of Guadalajara in the state of Jalisco. The city is the birthplace of the drink called “tequila”. Local people made a variety of a drink called mezcal by fermenting the heart of the blue agave plant that is native to the area surrounding Tequila. It was the Spanish who introduced the distillation process to the mescal, giving us what we now know as “tequila”.