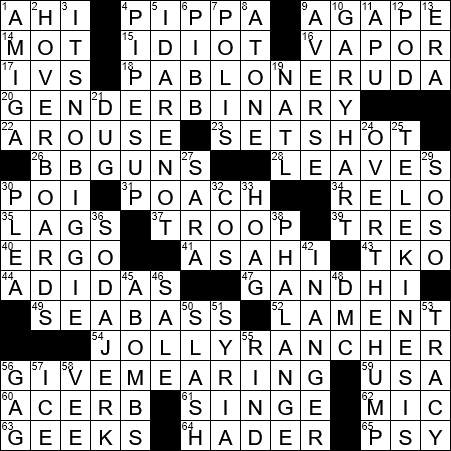 We talk so often about global warming these days but there is another fascinating phenomenon that is related, and known as “global dimming”. Global dimming is the reduction in the amount of heat that irradiates daily from the planet due to the insulating effect of pollution and vapor trails (contrails) from aircraft that are present in the atmosphere. The effect has been touted as a theory for decades but dramatic empirical data became available in the wake of the terrorist attacks of September 11, 2001. Planes were grounded and the skies over America were clear for three days. There was a stark change in the temperature range measured across the US for these three days, demonstrating the impact that air travel has on our climate.

17. They have tubes attached : IVS

One might see intravenous drips (IVs) in an intensive care unit (ICU).

18. Gabriel García Márquez called him “the greatest poet of the 20th century, in any language” : PABLO NERUDA

The corm of some taro plants is used to make poi, the traditional Hawaiian dish (that I think tastes horrible). When a taro plant is grown as an ornamental, it is often called Elephant Ears due to the shape of its large leaves.

“Ergo” is the Latin word for “hence, therefore”.

Asahi is a beer, and the name of the brewery that produces it. “Asahi” is Japanese for “morning sun”. Asahi introduced a “dry beer” in 1987, igniting a craze that rocketed the brewery to the number one spot in terms of beer production in Japan, with Sapporo close behind.

47. Image on many a rupee banknote : GANDHI

Jolly Ranchers are a brand of hard candies that has been produced since 1949. Founded in 1949 in Golden, Colorado, the Jolly Rancher name was chosen to present a friendly, western image.

The USA Network cable television channel has been around since 1971. Back in 1971 it was called the Madison Square Garden Network, becoming USA in 1979.

62. Item that names a person holding it when its middle letter is removed : MIC

Remove the letter I from the middle of “mic” (microphone) and we get MC (emcee), someone who might be holding that mic.

Originally, a geek was a sideshow performer, perhaps at a circus. We use the term today for someone regarded as foolish or clumsy, and also for someone who is technically driven and expert, but often socially inept.

“Trainwreck” is a romantic comedy released in 2015 that brings together the talents of Judd Apatow as director and Amy Schumer as writer. Schumer also stars.

The Greek word “polis” translates as “city”, although the term is often used in English to refer to the ancient Greek city-states.

Gary Hart was serving as US Senator for the state of Colorado when he first ran for the Democratic nomination for president, in 1984. He made a second bid for the nomination in 1988. In the 1988 campaign, the polls showed that Hart was leading the pack when it came to light that he was having an extra-marital affair with actress and model Donna Rice. There was a famous photograph that surfaced at the time, showing Rice on Hart’s knee while the pair were in Bimini about the aptly named motor yacht “Monkey Business”.

Before 1919, when Babe Ruth started to hit home runs like they were going out of style, baseball was more of a strategy-driven sport. There was less emphasis on power hitting, and more emphasis on playing “small ball”, with a focus on stolen bases and hit-and-run plays. In addition, the ball used was relatively “dead” and unresponsive to the bat. As a result, the period before 1919 is referred to as baseball’s “dead-ball era”.

The real name of singer Bob Dylan is Robert Zimmerman. Zimmerman chose that particular stage name because he was greatly influenced by the poetry of Welsh poet Dylan Thomas.

Bob Dylan’s 1976 song “Sara” is a tribute to his then-wife Sara Dylan née Noznisky. In the song, Bob describes Sara as a “radiant jewel, mystical wife”. Sadly, the couple divorced the following year.

In the halcyon days of yore, a “soda jerk” was usually a young person whose main job was to serve ice cream sodas in a drugstore. The server would “jerk” the handle on the soda fountain to dispense the soda water, giving the job its distinctive name.

I always thought that the singular of “phalanges” was “phalanx”, but I guess “phalange” is used as well. A phalanx/phalange is a bone in a finger or toe.

“Point of sale” is an alternative name for “checkout”, the place where a transaction is completed in a store.

The actor and comedian Tracy Morgan plays the role of Tracy Jordan on the the TV show “30 Rock”. Morgan got his big break on TV when he joined the cast of “Saturday Night Live” in 1996. He stayed with the show for eight seasons.