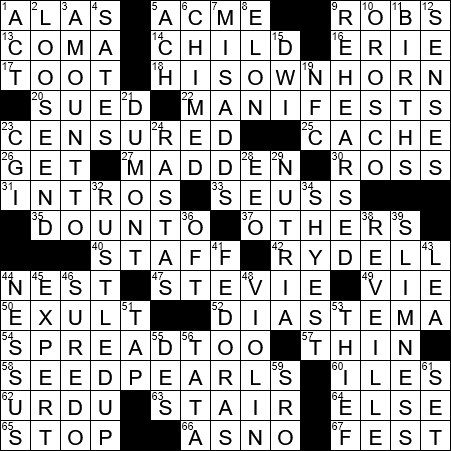 Each of today’s themed answers includes the hidden word TOOTH. There’s a gap in those TEETH (a black square, a space between words). A gap in teeth is known as a DIASTEMA:

Retired sportscaster John Madden is a former NFL footballer and Super Bowl-winning coach. Famously, Madden has a fear of flying and so he travels around the country on “the Madden Cruiser”, a customized coach that he started using in 1987. Madden actually lives about a mile from me and we used to see the Madden Cruiser filling up with provisions at our grocery store all the time. Even though he is afraid to fly, John’s wife Virginia actually has her private pilot’s license.

The Ross Ice Shelf is the largest such structure in Antarctica, and is about the size of the country of France. The shelf is named after the person who discovered it in 1841, Captain Sir James Clark Ross.

“Dr. Seuss” was the pen name of Theodor Seuss Geisel. Geisel first used the pen name while studying at Dartmouth College and at the University of Oxford. Back then, he pronounced “Seuss” as it would be in German, i.e. rhyming with “voice”. After his books found success in the US, he went with the pronunciation being used widely by the public, quite happy to have a name that rhymed with “Mother Goose”.

“Grease” was, and still is, a very successful stage musical with a blockbuster film version released in 1978. The movie stars John Travolta and Olivia Newton-John. Travolta wasn’t the first choice for the lead role. It was first offered to Henry Winkler of “Happy Days” fame in which he played “the Fonz”. Winkler turned down the role for fear of being typecast as a leather-clad fifties “hood”.

Singer Stevie Nicks came to fame as the lead singer of Fleetwood Mac. Nicks has a very distinctive voice, heard at its best (I think) on the famous 1977 album “Rumours”.

Lahore is a large city in Pakistan, that is second in size only to Karachi. It is known as the Garden of the Mughals (or in English, Moguls) because of its association with the Mughal Empire. The Mughals ruled much of India from the sixteenth to the nineteenth centuries.

The North Carolina city of Greensboro was founded in 1808 as Greensborough, with the spelling changing in 1895. The city was named for Major General Nathanael Greene who commanded the defeated American forces at the Battle of Guilford Court House during the Revolutionary War. Although technically a defeat, Greene’s forces inflicted such heavy casualties on the British Army, led by Lieutenant General Charles Cornwallis, that the outcome was a strategic victory for the Americans.

Jesse Orosco is a former baseball pitcher who played for several teams including the New York Mets and the Los Angeles Dodgers. Orosco had a long playing career, retiring when he was 46 years old. Partly because of that long career, he holds the major league record for career pitching performances: 1,252 games.

The DuMont Television Network started broadcasting in the US in 1946, only a few years after NBC and CBS went on the air. DuMont only lasted for ten years, having struggled to make money from day one. One of the network’s most famous shows was “Cavalcade of Stars”, which was the precursor of “The Jackie Gleason Show”.

23. Most movie explosions these days, for short : CGI

I must admit that I don’t really know much about Rastafarianism. I do know that a “Rasta”, like Bob Marley, is a follower of the movement. Some say that Rastafarianism is a religion, some not. I also know that it involves the worship of Emperor Haile Selassie I of Ethiopia.

44. Centaur who was killed by Hercules : NESSUS

Fagin is the colorful antagonist in the Charles Dickens novel “Oliver Twist”. Fagin leads a band of children who earn their keep by picking pockets and committing other petty crimes. Fagin’s most successful pickpocket is the Artful Dodger.

The Pont des Arts is a footbridge crossing the River Seine in Paris. It is named for the nearby Palais de Louvre, which used to be known as the Palais des Arts. In recent years, tourists have attaching “love locks” to the railing on the side of the bridge. These are padlocks engraved with the names of a couple who are in love. The pair attach the lock to the railing and then throw the key into the Seine as a romantic gesture.

1. Interjection derived from the Latin for “weary” : ALAS

31. They’re often made at icebreakers : INTROS

2. Something to tie up : LOOSE END

23. Most movie explosions these days, for short : CGI

44. Centaur who was killed by Hercules : NESSUS