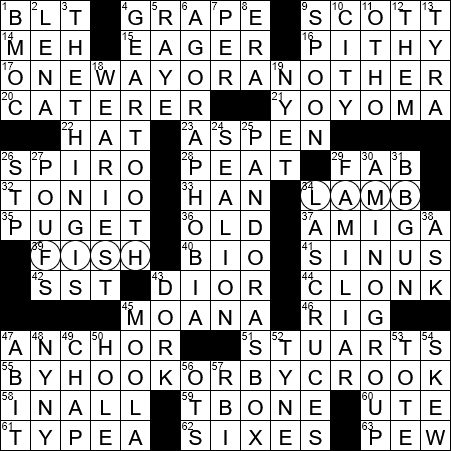 Theme: By Hook or by Crook

We have some grid art today. Black squares in the left of the grid depict a HOOK, and in the right of the grid a CROOK. Caught in the HOOK is a FISH, and in the CROOK is a LAMB (shown by circled letters):

Retired astronaut Scott Kelly spent a total of 520 days in space, including a year long (342 days) stint on the International Space Station (ISS). That One-Year Mission on the ISS was primarily undertaken to examine the health effects of long term spaceflight. Scott’s identical twin brother Mark Kelly participated in the health study as a control subject on the ground. Mark is also a retired astronaut, and Scott and Mark are the only siblings to have flown in space. Also, Mark is the husband of former Congresswoman Gabrielle Giffords.

26. First name of the second vice president to resign from office : SPIRO

The Ichthys was a secret Christian symbol used in the early church. The symbol is composed of two intersecting arcs and resembles the profile of a fish. The Ichthys reemerged in the early 1970s as an icon for modern Christianity, at which time it was given the nickname “Jesus Fish”. Many Christians nowadays place the symbol on the rear of their cars or wear it as a pendant.

42. Attraction at Boeing’s Museum of Flight, for short : SST

“Moana” is a 2016 animated feature film, the 56th animated Disney movie. The title character is the daughter of a Polynesian chief who heads off in search of the demigod Maui, hoping that he can save her people.

The Royal House of Stewart (also Stuart) came to power in Scotland in the late 14th century, starting with Robert II of Scotland. The Stewarts extended their power to England and Ireland when the Tudor line became extinct as Queen Elizabeth I died without issue. James VI of Scotland became James I of England at that time. The last Stuart monarch was Anne, Queen of Great Britain who also died without issue, despite going through seventeen pregnancies. Assuming Prince William, Duke of Cambridge becomes the British Monarch one day, then there will be a Stewart descendant on the throne again. William is the son of Diana, Princess of Wales, and Diana was descended from the Stewart monarchs.

Lena Dunham is a co-star in the HBO series “Girls”, and is also the show’s creator. Dunham garnered a lot of attention for herself during the 2012 US Presidential election cycle as she starred in an ad focused on getting out the youth vote. In the spot she compared voting for the first time with having sex for the first time.

In early Greece the agora was a place of assembly. The assemblies held there were often quite formal, perhaps for the reading of a proclamation. Later in Greek history, things became less formal as the agora evolved into a market place. Our contemporary word “agoraphobia” comes from these agorae, in the sense that an agoraphobe has a fear of open spaces, a fear of “public meeting places”.

The first letter in the word “mnemonic” is a silent M.

Vladimir Putin became acting President of Russia at the very end of 1999 when Boris Yeltsin resigned. Putin was elected in his own right in 2000, re-elected in 2004, and then ran up against a term limit in 2008. In 2008 Putin was appointed by his successor, President Dmitry Medvedev, to the position of Prime Minister. Putin is a controversial figure, inside and outside Russia. On the one hand he led the country out of an economic crisis into a period of stability and relative prosperity. On the other hand he has been associated with government corruption and accused of allowing private concerns to have undue influence on government actions. And then, along came the 2016 US presidential election …

The pouf is an updo hairstyle that was popularized in the 18th-century France by Marie Antoinette. The French queen first sported the pouf at the coronation of her husband, Louis XVI. Ladies of the day would often wear many ornaments and decorations in their hair set in a pouf, such as pearls, feathers and even ships.

Las Cruces (Spanish for “the crosses”) is the second largest city in the state of New Mexico, and is the home of New Mexico State University.

I consider “dork” to be pretty offensive slang. It originated in the sixties among American students, and has its roots in another slang term, a term for male genitalia.

“Chap” is an informal term for “lad, fellow”, especially in England. The term derives from “chapman”, an obsolete word meaning “purchaser” or “trader”.

Newcastle upon Tyne in the North of England is home to the famous Newcastle Brown Ale.

17. Whatever it takes : ONE WAY OR ANOTHER

26. First name of the second vice president to resign from office : SPIRO

42. Attraction at Boeing’s Museum of Flight, for short : SST

55. Whatever it takes … as hinted at in the arrangements of black squares around the circled letters : BY HOOK OR BY CROOK

9. Do a little cuddling : SPOON