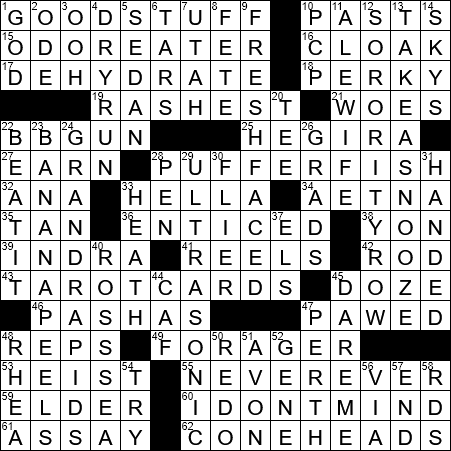 In the J.K. Rowling series of novels, Harry Potter used a Cloak of Invisibility that was passed down to him by his father.

“Fugu” is the Japanese name for pufferfish, also known as blowfish. Fugu is a notorious dish on a Japanese menu as it can be extremely poisonous. The liver, ovaries and eyes of the pufferfish contain lethal amounts of the poison tetrodotoxin, which paralyses muscles causing death by asphyxiation.

John Hancock Financial was founded in 1862. The company was named in honor of the American patriot John Hancock.

In Hindu mythology, Indra is the King of the gods, Lord of Heaven. Indra is also the God of War, Storms and Rainfall.

We use the verb “to angle” to mean “to fish” because “angel” was an Old English word for a hook.

In the days of the Ottoman Empire, the term “bey” was used for many different officials, but traditionally it referred to the leader of a small tribal group. Today “bey” is used very much like “mister”.

The Chevrolet Malibu was named for the city of Malibu, California. The Malibu was produced by General Motors from 1964 to 1983, and was then reintroduced in 1997.

We use the term “John Hancock” to mean a signature. The reference is to the large and flamboyant signature placed by John Hancock on the Declaration of Independence. Hancock was President of the Continental Congress from 1775 to 1777.

The Ross Sea is a bay in the Southern Ocean of Antarctica. It was discovered by one James Ross in 1841. A more recent discovery, in the waters of the Ross Sea, was a 33 feet long giant squid that was captured in 2007.

Mount Erebus is a volcano in Antarctica, located on Ross Island. Erebus is the second-highest on the continent, after Mount Sidley. It was discovered in 1841 by Sir James Clark Ross, along with the companion volcano Mount Terror. Ross named the peaks for the ships used on his voyage: HMS Erebus and HMS Terror.

Perth is the capital city of Western Australia. Perth earned itself the nickname of “City of Light” in 1962 as the virtually all the town’s lights were turned on at full power when astronaut John Glenn passed overhead in earth orbit in Friendship 7, so that he could see the city below. The city gave a repeat performance for Glenn in 1998 when he passed overhead in the Space Shuttle in 1998.

10. They often come back to haunt people : PASTS

59. One knowledgeable on tribal lore : ELDER

12. Home to many sisters : SORORITY ROW

26. Their number increases every May : GRADS