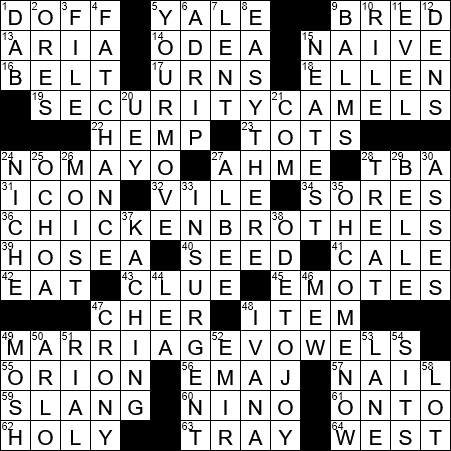 Each of today’s themed answers is a common phrase with the letters -ELS added:

One doffs one’s hat, usually as a mark of respect. To doff is to take off, with “doff” being a contraction of “do off”. The opposite of “doff” is “don” meaning “to put on”.

The word “stud”, meaning “a male horse kept for breeding”, is derived from the Old English word “stod”, which described a whole herd of horses. The term “stud” can be used figuratively for a “ladies’ man”.

“Suspenders” is another one of those words that has morphed in crossing the Atlantic. Back in Ireland we hold up our pants (trousers) with “braces”. Suspenders hold up ladies stockings (i.e. our word for a garter belt). It can be confusing …

“Juno” is a great comedy-drama released in 2007 that tells the story of a spunky teenager who is faced with an unplanned pregnancy. The film won an Oscar for Best Original Screenplay. The relatively low-budget movie earned back its initial budget in the first day of its full release to the public. Low-budget blockbuster; my kind of movie …

The dromedary, also known as the Arabian Camel or Indian Camel, is the camel that has only one hump. The other species of camel is the Bactrian, which has two humps. The hump of a dromedary contains up to 80 pounds of fat, which can be broken down into water and energy if no food or water is available.

Hemp is a hardy, fast-growing plant that has many uses mainly due to the strength of the fibers in the plant’s stalks. Hemp is used to make rope, paper and textiles. Famously, there is a variety of hemp that is grown to make drugs, most famously cannabis.

39. Book between Daniel and Joel : HOSEA

Clue is board game that we knew under a different name growing up in Ireland. Outside of North America, Clue is marketed as “Cluedo”. Cluedo was the original name of the game, introduced in 1949 by the famous British board game manufacturer Waddingtons. There are cute differences between the US and UK versions. For example, the man who is murdered is called Dr. Black (Mr. Boddy in the US), one of the suspects is the Reverend Green (Mr. Green in the US), and the suspect weapons include a dagger (a knife in the US), a lead pipe (lead piping in the US) and a spanner (a wrench in the US). I think it’s a fabulous game, a must during the holidays …

Chaz Bono is the only child of the singers Sonny and Cher (although they both have children from other marriages). Chaz was named Chastity Sun Bono at birth and told her parents at the age of 18 that she was a lesbian. More recently Bono underwent gender reassignment surgery, and Chastity has legally changed his name to Chaz.

The very recognizable constellation of Orion is named for the Greek God Orion, the Hunter. If you take a look at the star in Orion’s “right shoulder”, the second brightest star in the constellation, you might notice that it is quite red in color. This is the famous star called Betelgeuse, a red supergiant, a huge star that is on its way out. Betelgeuse is expected to explode into a supernova within the next thousand years or so. You don’t want to miss that …

Urban Dictionary is a website that was founded in 1999 by a computer science student at Cal Poly. The site contains definitions of mainly slang terms, and is maintained by the site’s members.

In Latin, the Christian season that is now called Lent was termed “quadragesima” (meaning “fortieth”), a reference to the forty days that Jesus spent in the desert before beginning his public ministry. When the church began its move in the Middle Ages towards using the vernacular, the term “Lent” was introduced. “Lent” comes from “lenz”, the German word for “spring”.

Daredevil Evel Knievel contracted hepatitis C from the many blood transfusions that he needed after injuries incurred during stunts. He had to have a liver transplant as a result, but his health declined after that. Knievel eventually passed away in 2007.

Edward Albee’s most famous play is “Who’s Afraid of Virginia Woolf?” Albee’s first play, a one-acter, was “The Zoo Story”.

Guerrilla (sometimes “guerilla”) warfare is a type of fighting engaged in by irregular forces using ambushes and sabotage. The term “guerra” is Spanish for war, and “guerrilla” translates as “little war”.

A crony is a friend or companion. The term originated as slang in Cambridge University in England in the 1600s. “Crony” is probably derived from the Greek “khronios” meaning “long-lasting”.

Ivana Winklmayr was born in Czechoslovakia. Winklmayr was an excellent skier, and was named as an alternate for the 1982 Czech Olympic Team. She was promoting the Montreal Olympics in New York in 1976 when she met Donald Trump. Ivana and Donald’s marriage was very public and well-covered by the media, but not nearly so well as their very litigious divorce in the early nineties.

“Rial” is the name of the currency of Iran (as well as Yemen, Oman, Cambodia and Tunisia). Generally, there are 1,000 baisa in a rial.

39. Book between Daniel and Joel : HOSEA

3. Escape tool secreted in a cake, in cartoons : FILE

5. Reminder to a chess opponent : YOUR MOVE

15. Most worthy of a handwriting award : NEATEST